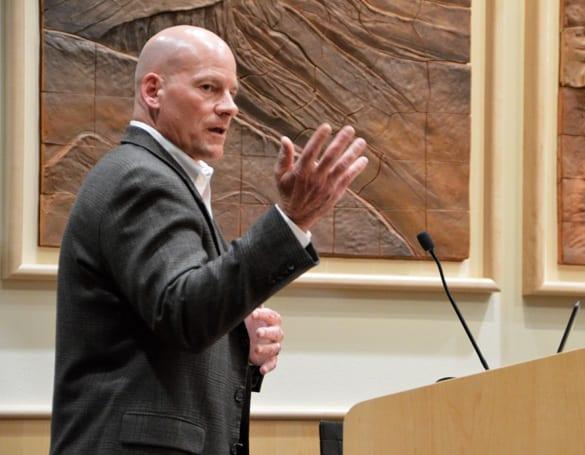 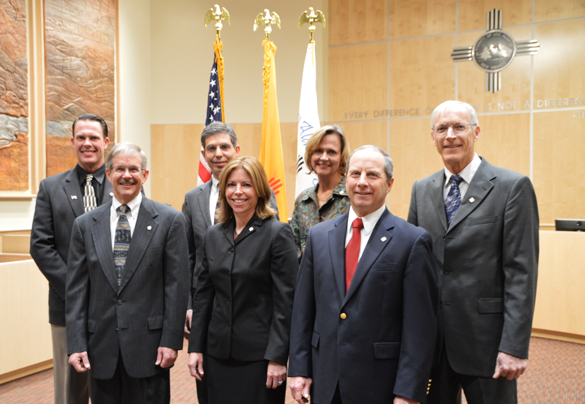 The first from Glasco was that drinking water from the 12 Los Alamos wells is safe and meets state and federal standards. The second from Hintze was that the Department of Energy knows it is liable for the cause of the chromium plume and will address it.

Hintze told the Council the Los Alamos National Laboratory power plant and power plants throughout the country used chromium as a corrosion inhibitor in their pipes to form a film on them so that they would not rust. He said afterwards it would be discharged and that back in the 1956 to 1972 timeframe, it was discharged just through outfalls into the canyon.

“Over that 16-year period it was estimated that about 160,000 pounds was discharged,” Hintze said. “That discharge went down the canyon on the surface and then vertically to where it now sits on the aquifer. The size of the plume is estimated at about a mile long, a half-mile wide and 50 feet deep. Whenever I say these numbers, you can’t look down 1,000 feet so it’s not like you are up here on the surface walking around a pond or a lake looking at exact dimensions. You’re looking down based on the sampling and the information that we have.”

Hintze said that what has been found now is that while the plume sits on the aquifer, it is migrating horizontally and not continually flowing down into the aquifer but sitting on it due to the permeability of the soil. He showed Council members a map of injection and extraction wells indicating that the migration of the plume is to the south-southeast.

“Interim measures are to extract contaminated water from the wells, run it through an ion exchanger which will remove the contaminants and then inject the clean water back into the ground. What that will do is form a hydraulic barrier or fence line along the edge of the plume and actually force the contamination and the concentrations back up to the northeast,” Hintze said.

He said that meanwhile, a final remedy for the plume will be developed for approval by the New Mexico Environmental Department so that DOE can “finally attack and take care of the plume and the remaining source”.

“When I talk about the source, of course there are no more discharges being made, however the chromium is still dripping down through the 1,000 feet to the aquifer, so our final remediation has to take into account that continued addition into the aquifer,” Hintze said. “So, we’re in the midst of doing amendment testing to that final remediation but, we don’t expect to start implementing that for three to five years. In the meantime, we will continue to run the system extracting the contaminated water, cleaning it and then forming the hydraulic barrier.”

Glasco told the Council that the County has 12 drinking water wells that pump water from the Pajarito Plateau with a spread of 15 miles. He said the plume is in proximity of one of those wells.

Glasco said when people see that the County’s water contains a particular contaminant or constituent they tend to get a little worked up about it but that it’s about the concentration.

“It doesn’t mean the water is unsafe. It’s only when it reaches an amount that has been judged to be unsafe,” he said.

Glasco went on to compare Los Alamos drinking water to Fiji, a commercial bottled drinking water, saying the chemical constituents of the two are almost identical.

“The closest well we have (to the plume) is Well 3, which is approximately a quarter of a mile from the 50 ppb line shown as the plume (boundary) and several hundred feet of thickness of aquifer between the contaminated and our own drinking water supply. That could be good news, it remains to be seen,” Glasco said. “At this point the plume has not affected any of our drinking water supply wells.”

He said that because of the potential risk, under the Safe Drinking Water Act, the NMED tests the wells every three years for chromium, however, going back at least 25 years, the County has cooperated with DOE and LANL and sampled County wells annually for a “long list of constituents”. He said since 2005 when the plume was discovered, the wells closest to the plume are tested quarterly and that as of yet, nothing but “background” has been seen in any of those wells.

“If we start to see any type of movement in the chromium level in Well 3, we will up the sampling frequency until we have determined that it is not actually just a natural variation in data but is a trend of upward concentration of chromium,” Glasco said. “At that point, we will look at the enveloping conditions – at what rate is it going up, how close to the standards, are we in a situation where we’re going to need that well to meet our demands, and if we’re just barely elevated, will we keep running it or not.”

Glasco added that the likelihood is that if the County sees the trend going up in Well 3, it will just be shut down.

“We have other wells we can supply water with and we don’t want to take any risk,” he said.

Glasco said that should there be contamination, the federal government is allowed to indemnify the County for that. He said the County also has an insurance policy that was procured in 2005 and renewed in 2011, which is “designed to stand in the gap”. He said the well would be shut off and the County would pursue options to either repair the well, minimize pumping of the well or just install treatment.

“We don’t expect to see any type of contamination from this chromium plume problem ever. If we did, we would be very surprised. It would be decades out,” Glasco said.

Councilor Chris Chandler told Hintze she thought he would agree that the County had nothing to do with how the plume came about and how the contamination came to be. She asked if the DOE is working on some sort of continuing plan for if the plume reaches the County’s water system.

“Just like in a lot of the clean-up, we know that we’re liable for what the cause is. We know exactly what the source was on this one here so whatever the impacts are, the liabilities associated with that, the Department has to address it from two perspectives. One is that we are liable for it, responsible for it, but we’re also part of the community,” Hintze responded.

Hintze told Chandler they were not going to be talking about the plume in 20 years.

“This thing will be finished and resolved, not to say that we won’t have another contaminant we have to clean up as part of our program, that we will have to address. This is our number one priority that we have right now,” he said.

In response to a question from Councilor Rick Reiss, Hintze explained the use of molasses in changing chromium 6 to chromium 3.

“You have to have a reducing environment to change from chromium 6 to chromium 3. What happens when you inject molasses is that it causes the microbes to multiply. They eat up all the oxygen in the water, which causes the environment to convert chromium 6 to chromium 3. Molasses works great! The issue is the microbes start to die off, so you have to continue to inject molasses. A chemical has the same effect, but you don’t have to keep injecting it,” Hintze said.

Councilor Chandler asked Glasco about the water being used by DOE on the plume issue.

“How does one allocate that to DOE’s water rights that they have refused to allocate to us? How is that done or is that coming off the County’s allocation?” she asked.

He said globally among the 5,000-acre feet of water rights, the County is only using about 3,500-acre feet so even if all 700-acre feet being used on the chromium plume problem was used, provided the situation stays as it is and all 5,500-acre feet are in one file, the County will have ample room to support those wells “even if they should get zero return for credit from the injection wells”.

At the conclusion of the presentation Hintze said there are three themes on the EM program.

“We have no classified materials therefore everything we deal with we would be doing so transparently. We can tell anyone about all the info we have. The second thing is that we’re going to do it safely. We shouldn’t have to worry about did we cause an accident that made things worse. The third thing is efficiency,” Hintze said. “I have yet to find anybody who does not like the fact that we’re cleaning up and getting rid of waste. Normally the issue is that you’re not doing it quickly enough or that it needs to be cleaned up in a little manner.” 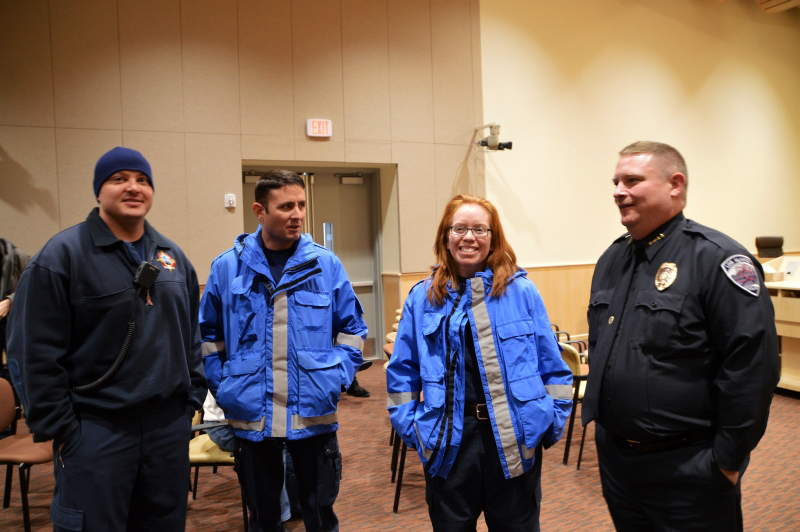 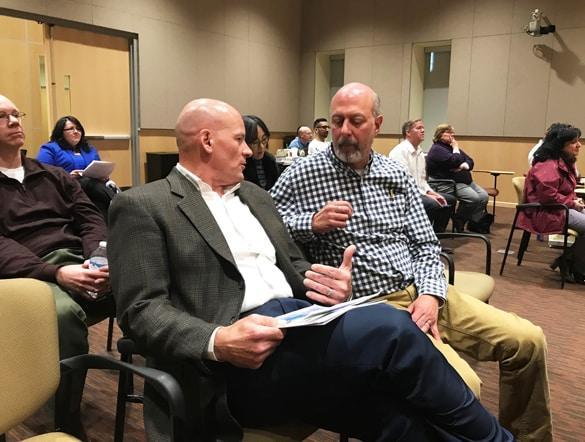