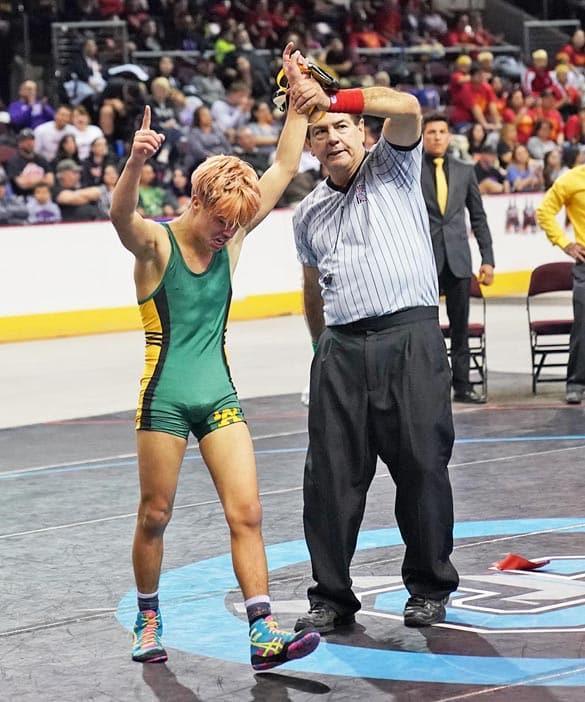 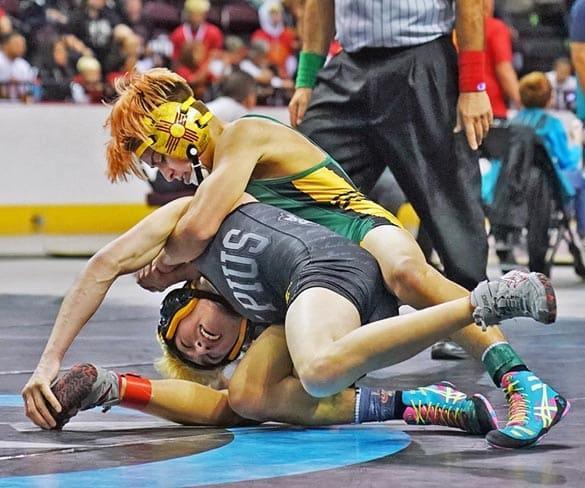 RIO RANCHO – “I’m proud of these kids.” That’s what Head Coach James Hatt said before his Los Alamos Hilltoppers entered the medal round of the New Mexico Activities Association’s state wrestling meet.
In just a year, the ‘Toppers rebounded from a 14th place finish in 2017 to move up seven spots to seventh place. Los Alamos nearly doubled their point total from a year ago.
“We have 10 of these 13 [athletes] returning for next season. We’re building this thing,” Hatt added. That “thing” Hatt is referring to is the seventh best 5A-wrestling program in the state.
The first medal earned at the NMAA tournament went to Sophomore Gloria Ramos, who defeated Cleveland’s Elizabeth Trujeque for a second time in the tournament, to finish in third place of the girls’ 131-lb weight class.
“It’s good, but it’s not what I wanted,” Ramos said after her match. “That girl from Sandia beat me, but I’ll get her next year.” In the second round of the tournament, Selvi Gallegos of Sandia High School picked up a 6-2 win over Ramos to advance in the winner’s bracket.
Ramos’ pre-match ritual consists of pacing back and forth very quickly with a little hop before she turns. The maneuver is reminiscent of Ultimate Fighting Champion Holly Holm’s pre-match routine.
When asked if she has anyone she looks up to, Ramos quickly answered, “My dad. He’s trained me and put this idea in my head that I could go professional with my fighting, and I want to go to the UFC. He’s been there for through everything, this is my fourth year fighting and he’s the one who got me into it, and I want it bad.”
Ramos added that Holm and former UFC champion Ronda Rousey are also role models.
In the 113-lb weight class, Junior Donovan Atencio fell via pinfall to Deming’s Frankie Lucero at the 1:38 mark to finish in fourth place.
Freshman Damian Gonzales fell to Los Lunas’ Matthew Gurule by pinfall at the 4:09 mark of the match in the 120-lb weight class to finish in sixth place.
Junior Israel Gellis made quick work of Farminton’s Tyler Savell earning a pin at the 58-second mark to claim fifth place in the 138-lb weight class.
Junior Milo Light had a pair of matches separated by only 52 minutes, dropping the first by a 6-1 decision to a stalling Pope Mariano of Grants, then losing in the fifth place match by pinfall at the 2:57 mark to Roswell’s Eddie Macias. Light showed obvious signs of fatigue after six grueling matches in two days.
In the 106-lb championship match, Devin Atencio skillfully moved around the mat and picked up points on his opponent Matthew Sanchez of St. Pius. Atencio had a few opportunities to pin Sanchez, but could not get in the right position. Recognizing the point differential midway through the third set, Atencio wrestled a technical and sound final minute to pick up the 6-2 decision before falling to his knees overcome with emotion.
“This feels amazing,” Atencio said after the medal ceremony. “I’ve been working at this my entire life. This is such a great feeling.”
“I couldn’t have done it without my brother Donovan [Atencio], and my best friend Reyes [Mendez], Izzy [Israel Gellis] and all my team around me. It was just amazing to finally win it this year,” Atencio added.
After winning the state title at the 106-lb weight class, Atencio plans to take a couple weeks off and then hit the mats and the weights again. “I’ll take two weeks off then get back at it again,” Atencio said about his plans to prepare for the Greater Southwest, a wrestling tournament held at Tingley Coliseum in Albuquerque.
Atencio’s title is the first Los Alamos wrestling title since former ‘Topper Lane Sanders won the 182-lb state championship in 2014.
The ‘Topper wrestling team took trips to Arizona and Utah to participate in large tournaments, but shielding his team from New Mexico competition wasn’t the main reason. Hatt said, “I wanted to get these kids exposed to large venues. The Utah tournament had 82 teams and was non-stop noise. I think it helped with the nerves wrestling here at the state tournament.”
When asked if he would try to repeat the schedule next season, Hatt gave a very honest answer: “It all depends on funding.”

The Los Alamos Daily Post would like to congratulate Coach James Hatt, all the assistant coaches, and the ‘Topper wrestling team on a successful year of hard work and a strong showing at the state tournament.

While the Los Alamos Hilltopper wrestling team was the model of competing with class, a few other schools and fan bases didn’t adhere to the NMAA motto.

Fans and assistant coaches spilled onto the mats, stopping all of the wrestling action as the National Guard, who was present as a sponsor, had to stop the fighting.

During the championship matches, Belen and St. Pius fan bases got into an altercation with several spectators escorted out of the Star Center.

Social media reports describe the continuing fracas outside the venue with at least one Belen assistant coach having to go to the hospital after getting hit with a rock. 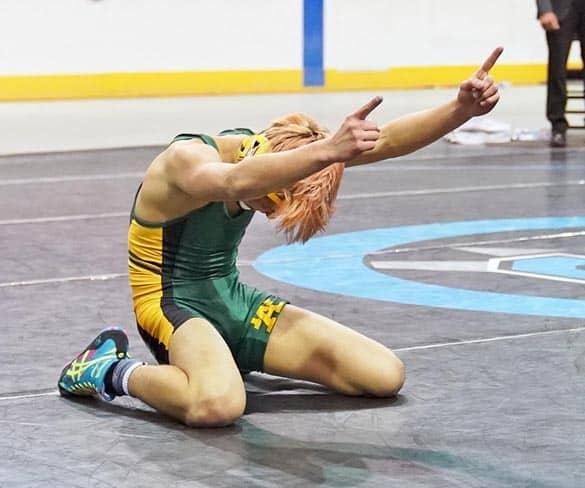 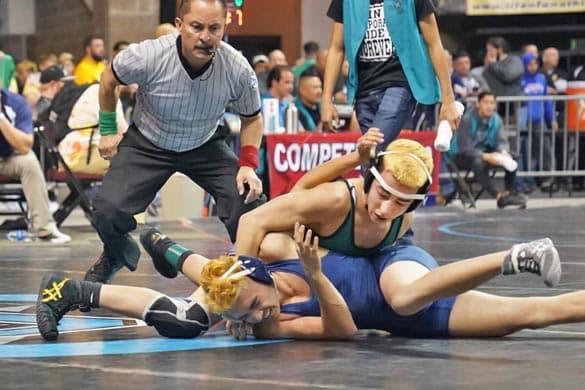 Damian Gonzales in weight class 120-lb wrestles his opponent from Goddard, which he won with a pin. Photo by John McHale/ladailypost.com 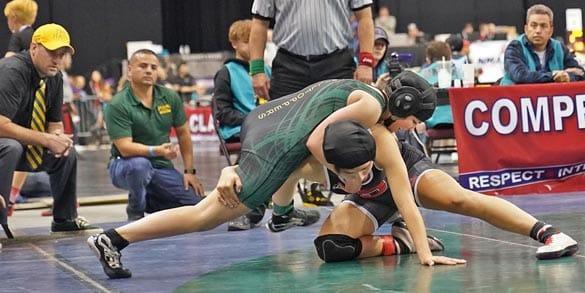 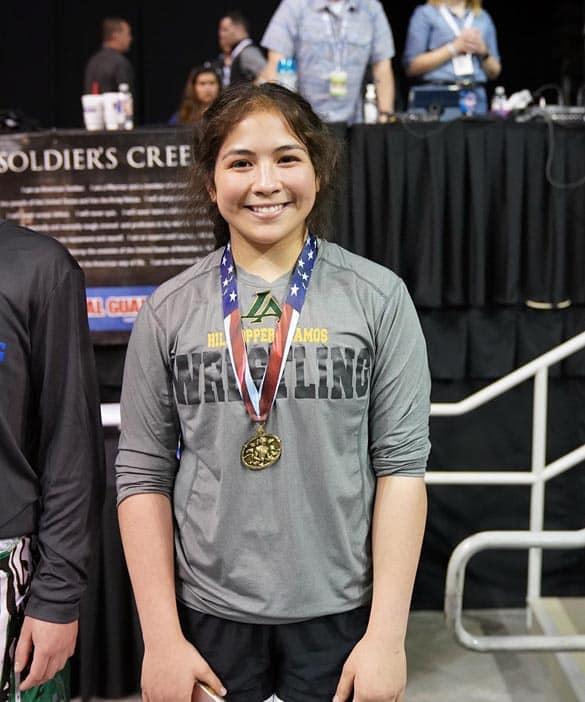 Gloria Ramos picked up a third place medal for the tournament. Photo by John McHale/ladailypost.com 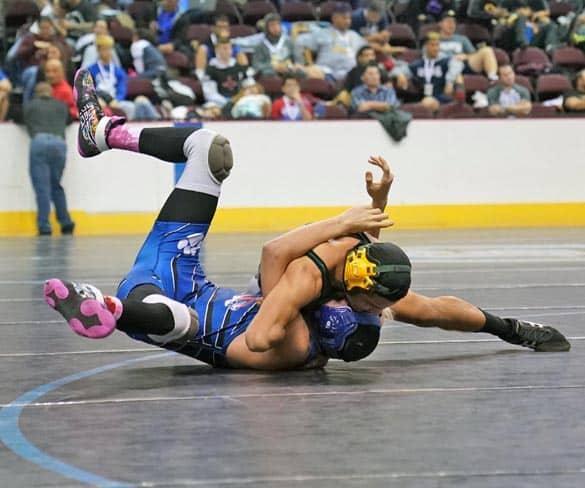 Israel Gellis wrestles an opponent from Los Lunas in the second round. Photo by John McHale/ladailypost.com 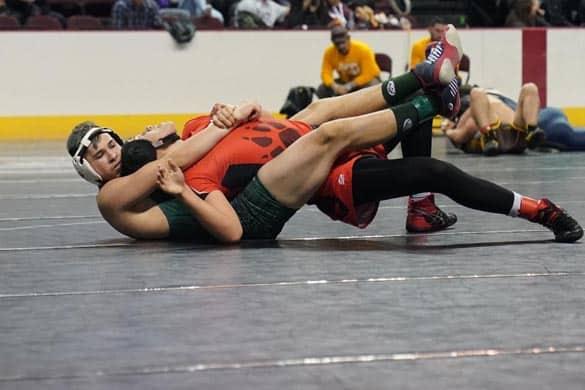 Ty Nieto wins his first round match against Uriah Munoz from Valencia High School in 5-2 decision. Photo by John McHale/ladailypost.com 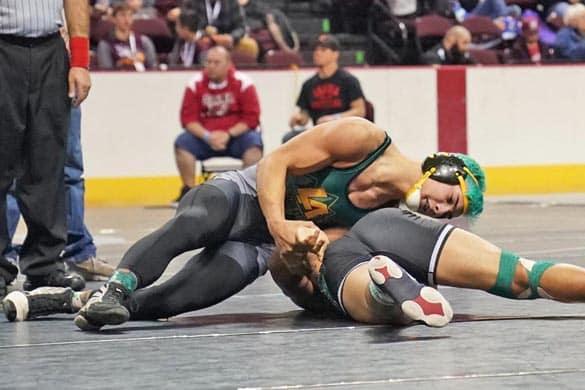 Dylan Irish wins his first round match by a pin over Farmington Jalen Allison. Photo by John McHale/ladailypost.com 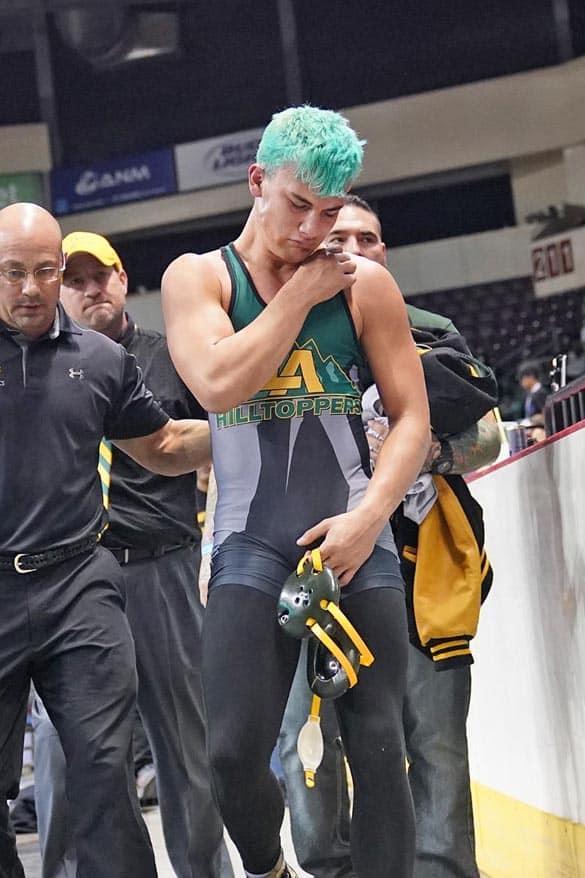 Dylan Irish tweaked his shoulder in his second round match against Los Lunas’ Santiago Salas but was able to compete in the third and fourth rounds. Photo by John McHale/ladailypost.com 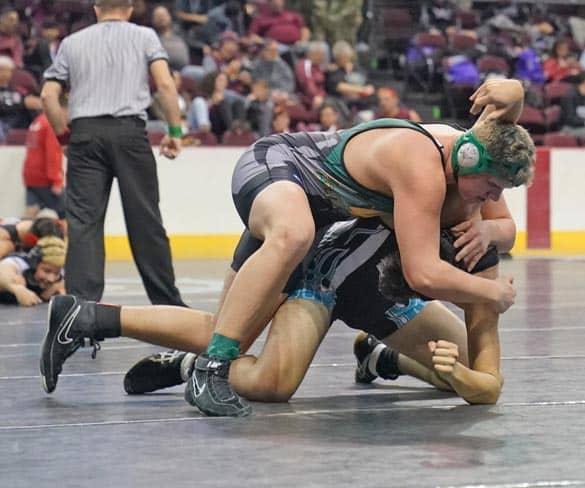 Dimitri Bullock wrestles Oscar Beltran from Santa Teresa High School and won in a 5-2 decision in the first round. Photo by John McHale/ladailypost.com 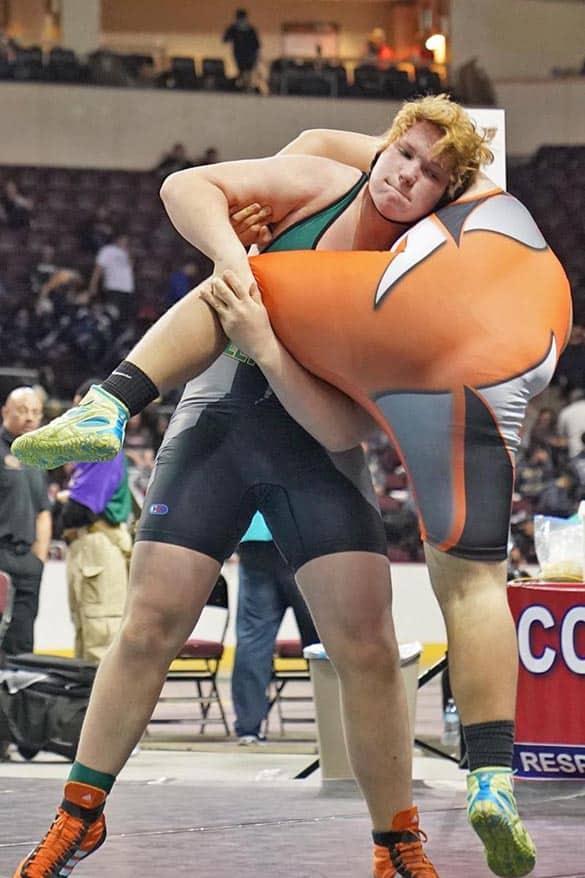 Milo Light wrestling in the 285-lb weight class picks up a win in the first round over Deangelo Padilla from Bloomfield by pinfall. Photo by John McHale/ladailypost.com