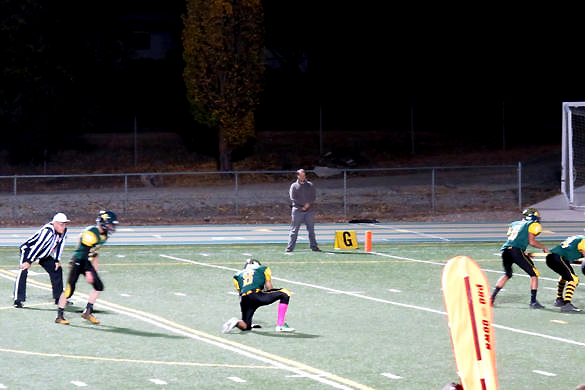 Max Sylvester lines up for the extra point. Photo by Niccolo Snyder/ladailypost.com
By NICCOLO SNYDER
Student Intern
Los Alamos Daily Post
The Los Alamos High School Hilltoppers Varsity Football team took on the Albuquerque Academy Chargers Friday, Oct. 14 at home. Decked out with pink accessories in support of breast cancer, the Hilltoppers shined under the Friday night lights beating the Chargers 44-7.
The blowout started with a run by Kevin Maresca for 80 yards to give the Toppers a 6 point lead in just 13 seconds. The Chargers attempt to make up the points was weak, and the Toppers turned them over on downs.
As the Toppers attempted another stride for points, they suffered 3 penalties in a row for illegal procedures. Luckily with a toss from Nick Quartieri to Aaron Waller, the Toppers smashed their penalty deficit in an instant, leading to a 7 yard run from Ryan McNeil for the touchdown. He was injured on the play but made a quick return.
Shortly after, Academy had a chance to make up 3 points but missed their field goal attempt. Going into the second quarter the Toppers lead by 14. Academy finally put points on the board scoring 7, but the Toppers struck back with a run by Quartieri. At the end of the second half the Toppers had a last minute chance and, with a scrambling pass to Traivs Wood thrown by Quartieri, the Toppers scored another TD off of an 82 yard pass.
The second half show was magnificent as the Los Alamos High School Marching Band performed and the YAFL teams lapped around the field. Going into the second half, the Toppers stripped the ball from the Chargers with Quartieri scoring another touchdown. This also led to another onslaught of the Topper attack with a touchdown by Quartieri. The score at 44-7, the Toppers triggered a mercy rule resulting in a continuous clock. Both teams fought hard in the dying minutes, but in the end Los Alamos came out on Top.
Quartieri was undoubtedly the player of the game scoring 3 TD’s. During an interview after the game, Quartieri said, “As a whole we played great, the defense was rough in the first and better in the second and we could have had less penalties.”
Let’s hope the Toppers can continue their good form.
Menu
LOS ALAMOS