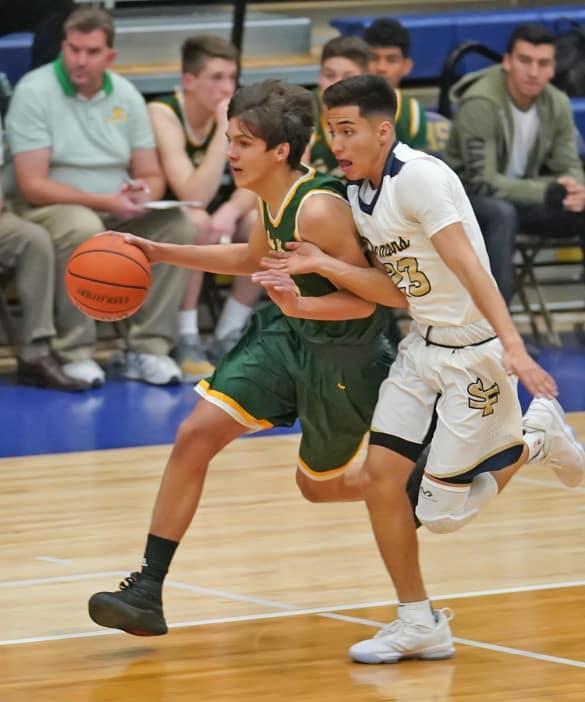 Gavin Campos has company as he brings the ball down court in the game against the Santa Fe High Demons played Saturday evening in Tony Royal Gymnasium in Santa Fe. This kind of defense pressure hounded the Toppers all night long and the pressure was more than the Toppers could deal with. Photo by John McHale/ladailypost.com 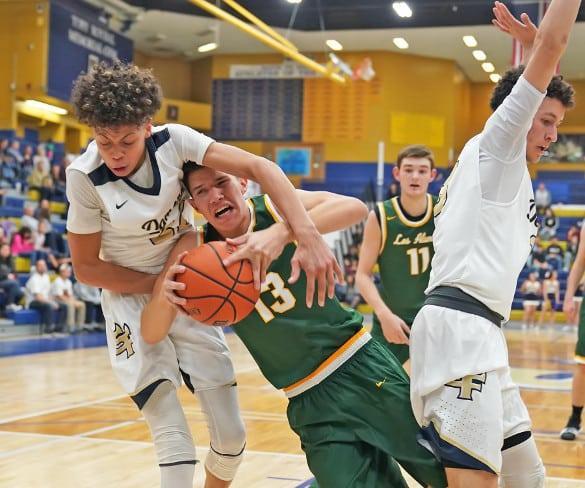 Michael Naranjo battles for a rebound under the Topper basket. Photo by John McHale/ladailypost.com

With seniors Antonio Trujillo and Ramon Roybal sitting out nursing injuries, the Hilltoppers took on the Demons without two top scorers and ball handlers, giving some inexperienced players an opportunity to step up.

Early on, the ‘Toppers were able to hang tough using their obvious height advantage and a 2-3 zone defense over the smaller Demon squad. The Los Alamos big men, Troy Hammock, Michael Naranjo, and Ivan Balakirev, combined for 11 first quarter points and only trailed Santa Fe by two points at 17-15 after one quarter.

Santa Fe employed a full court pressure that would stifle the inexperienced ‘Topper ball handlers and lead to multiple turnovers and missed shots. Los Alamos would only score three second-quarter points while allowing the Demons to score 20. The dagger would come when Santa Fe held the ball at mid court, draining over a minute and 12 seconds before hitting a three-point basket as the first half came to an end with Santa Fe holding a 27-18 advantage.

The ‘Toppers wouldn’t fare much better in the third quarter. Hammock and Naranjo combined for seven third-quarter points, the only ‘Topper points of the quarter, while giving up 16 to Santa Fe for the 28 point deficit.

Santa Fe emptied their bench for the fourth quarter which allowed ‘Topper sophomore Gavin Campos to get free and score seven of his eight points on drives to the basket. Fellow sophomore Brian Irwin chipped in four fourth-quarter points.

Hammock led Los Alamos with 10 points, followed by Campos and Naranjo with 8 each. David Owen and Irwin chipped in 4 apiece while Balakirev added 2.

The game was the sixth in eleven days for the ‘Toppers. “Maybe that was the let down after the first quarter, but I don’t know that they were that fatigued,” Head Coach Mike Kluk said after the game. “Not having Antonio and Ramon was the biggest thing to control the tempo and control the ball.  It was a little harum-scarum tonight.”

Without Trujillo and Roybal, the ‘Topper guards were reluctant to shoot the ball and crumbled under the Demon pressure. “Santa Fe is a quick team and plays a high-pressure defense, and our inexperienced guys struggled with the pressure,” Kluk added.

The ‘Toppers return to Griffith Gymnasiun for a 7 p.m. contest Tuesday against Taos. It’s still unknown if Trujillo and Roybal will be ready to play.

Between the C-team, Junior Varsity, and Varsity teams, Los Alamos was outscored 201-94 against Santa Fe. “We had a lot of players leave at the C and JV level for the break,” Kluk said. “We have to hit the reset button, they come back and they’re not in shape and we have to start over with them.”

“We will get some practice time with them and get them up to speed,” Kluk said about the next couple weeks. “As for the varsity, we need to get Antonio and Ramon health. We have Michael healthy now, and Ivan is healthy again, so hopefully we will get back on track.” 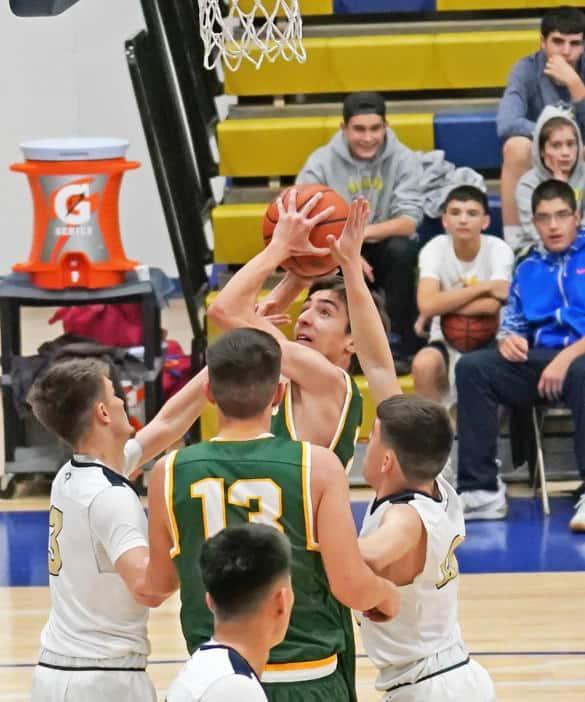 David Owen feels the pressure the Demons put on the Toppers. Photo by John McHale/ladailypost.com 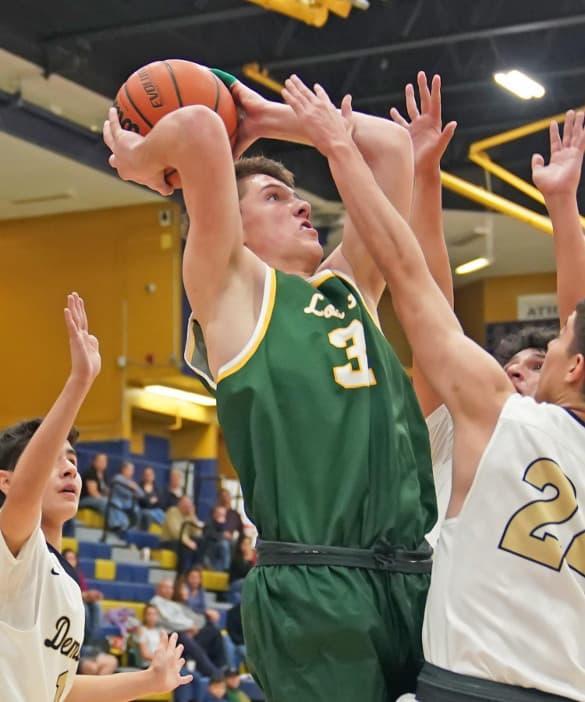 Brian Irwin battles his way to a layup attempt in the third quarter. Photo by John McHale/ladailypost.com 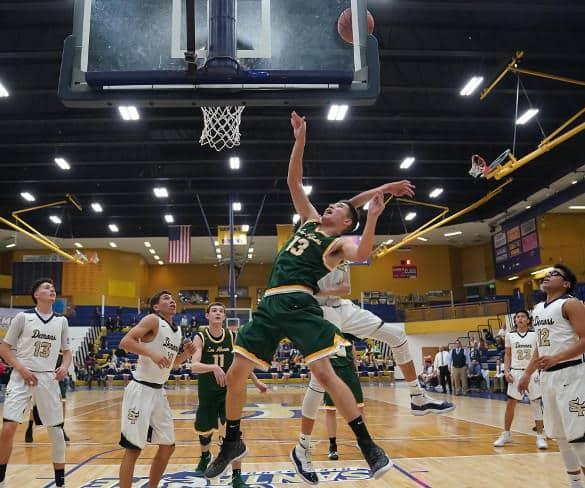 Michael Naranjo goes for a layup only to have it blocked in the fourth quarter. Photo by John McHale/ladailypost.com 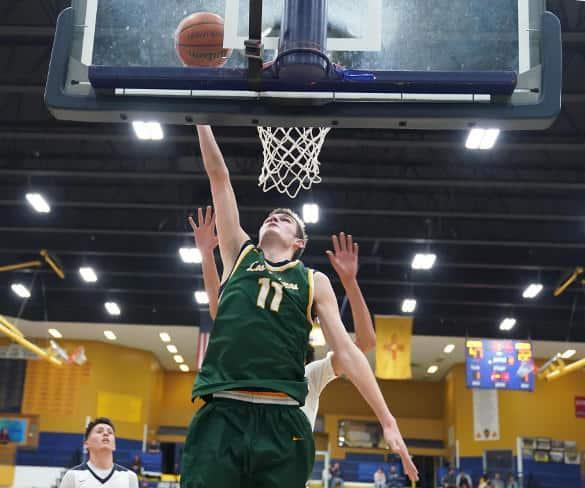 Troy Hammock goes for a two-point layup in the closing moments of the game. Photo by John McHale/ladailypost.com