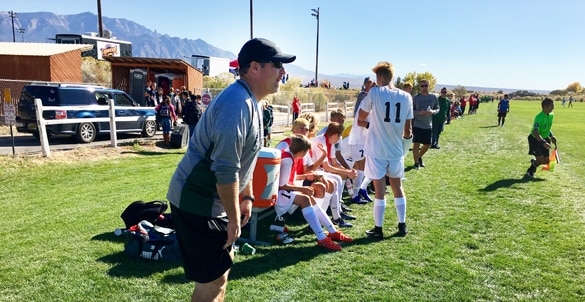 Coach Ron Blue and the Hilltoppers root on the reserve players as they hold the lead. Photo By RJ Montaño/ladailypost.com

BERNALILLO – It was business as usual for the Los Alamos Hilltopper Boys Soccer Team, who beat Roswell 3-0 today to advance to the semifinals of the New Mexico Activities Association state tournament.

‘Topper Freshman Sam Cirigliano got things rolling when he put Los Alamos up 1-0 in the fifth minute of the match. A few missed opportunities and good defense would make this the halftime score.

Junior Arthur Steinkamp put the ‘Toppers at 2-0 after making an athletic play to get free and strike for the score. Steinkamp would close out the scoring, making the match 3-0 after senior Ben Rees juggled the ball around the goal line to lull the Roswell defender and goalkeeper out of position for the assist midway through the second half.

The ‘Toppers were able to give their starters a little bit of a break by playing their reserves for some significant minutes in the second half, which should benefit them in the semifinals and possible championship game.  The reserves did their job and maintained the shutout win.

“I was very proud [of how the team played]. I thought we played with good energy,” Head Coach Ron Blue said after the match. “All-in-all a really good win, something to prep us for Academy. I’m excited.”

The ‘Toppers advance to play Albuquerque Academy in the semifinal round of the NMAA tournament at 12:30 p.m. Friday. Academy won their quarterfinal match 4-1 over Valencia.

Steinkamp had a few goal scoring opportunities go awry in the first half but settled in as a leadership presence on the field.

“I was maybe a little bit nervous because it was the first game [of the tournament], but I settled in and scored two,” Steinkamp said after the match.

Ben Rees also settled into the game, earning two assists and being a calming leader for Los Alamos.

“It’s always great to get these chances at State, and this win just felt good,” Rees said after the game. “As far as I’m concerned, [Rees] was the MVP of this game,” Blue added.

Tristan Semelsberger, a usual mainstay in the ‘Toppers box score, had a quiet afternoon.

“Teams are zeroing in on Tristan,” Blue said. “You saw that guys were pulling on his jersey or hitting him every chance they got.”

“I’ve been here three years and will have faced Academy 10 times already,” Blue said about his semifinal match up. “I expect us to have to match their intensity. The one thing they do is they’re well coached. They’re the number one team for a reason.”

Los Alamos enters the semifinals with a lot of confidence.

“I expect us to be ready. I expect us to have the confidence to go and compete and play against them, and get the win,” Blue said.

“We’re definitely gonna put it to them, and I think we’re gonna win,” Steinkamp added.