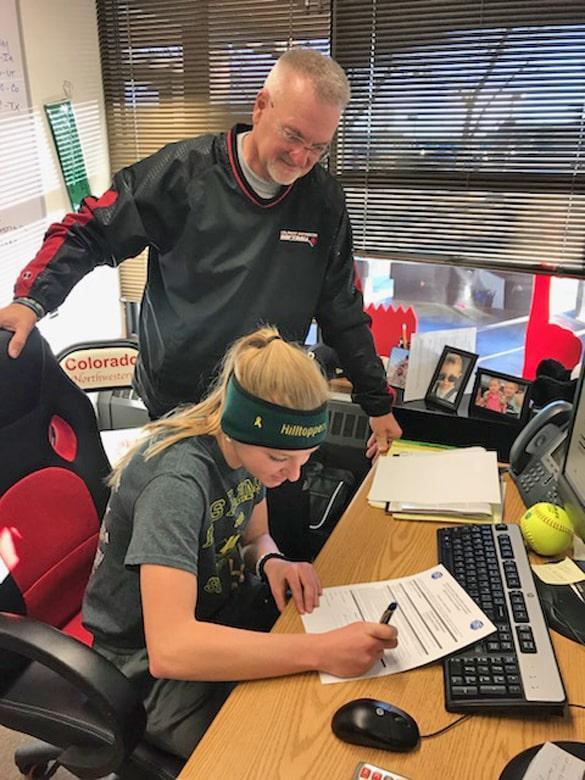 After picking up a district 2-5A championship and being named the district player of the year, Los Alamos Hilltopper Softball catcher Jayde Tucker nabbed her biggest accomplishment yet. Tucker has signed a letter of intent to play college baseball for the Spartans of Colorado Northwestern Community College (CNCC) in Rangley, Colo.

Spartan Head Coach Ken DeCook likes what he sees out of his recruiting class.

“We have recruited quality students that are very good softball players,” DeCook said in a released statement. “These young ladies are from all over the United States and are some of the best softball players available to us. Each of these players have the opportunity to make a difference in a game.”

“Jayde was looking to go to school out of state, and we like Colorado and [CNCC] has a beautiful campus, and the town’s topography and elevation is similar to Los Alamos, it just felt like home and really familiar,” Audra Tucker, Jayde’s mother and biggest supporter told the Los Alamos Daily Post in a recent interview. “The dorm rooms are right outside the softball fields, so it’s convenient for academics and athletics at the same time.”

“It’s going to be tough for me,” Audra said about watching Jayde leave for college. “We’re really close. She’s very independent and I think she’s going to excel being away from home. The nice thing is we can facetime, but it’ll be hard not seeing her every day.”

As for Jayde Tucker, she’s looking forward to her opportunity to play at CNCC.

“It’s pretty exciting, it’s always been my dream to play college softball and now I’m getting the chance to do it,” she said.

Tucker finished the season with a .545 batting average, 15 stolen bases, and 16 career homeruns.

“There’s going to be a lot of freshman next season. We’re going to have to build up the program again in a tough conference,” Tucker said.

The Spartan’s return only four players from a year ago, which is a small number, even for a two-year school. The current recruiting class will try to rebuild a program that went 0-55 last season but finished near the top of the conference in 2016.

The rigors of a collegiate softball schedule are nothing new to Tucker. Although the high school softball season is only 25 games, the advantages of playing club ball offer the experience of playing multiple games in a short period, mimicking a college season.

“I play summer, USSSA, and club ball, which has more games and is a lot more competitive. College recruiters look more at club sports rather than high school because you play game, after game, after game. I remember one tournament where we played five games in a row, so I know I can do it,” Tucker said about playing a full college season.

The Spartans will play 20 games this summer, and nearly 60 games next spring in the Scenic West conference that includes schools in Nevada, Idaho, Utah and Colorado. The team also will travel to Texas and Kansas for games this upcoming season.