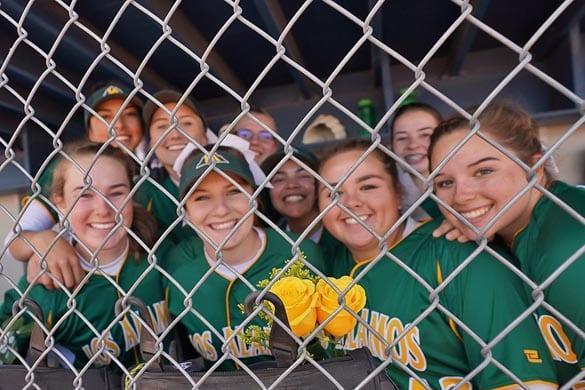 It’s all smiles in the dugout before the softball game began Wednesday afternoon at Overlook Park. The ‘Toppers played against the Del Norte Knights. The first inning set the tone as the ‘Toppers were ahead 6-0. The second inning was a blowout as the ‘Toppers batted twice and ran the score 20-0. The game was called on the mercy rule. Photo by John McHale/ladailypost.com 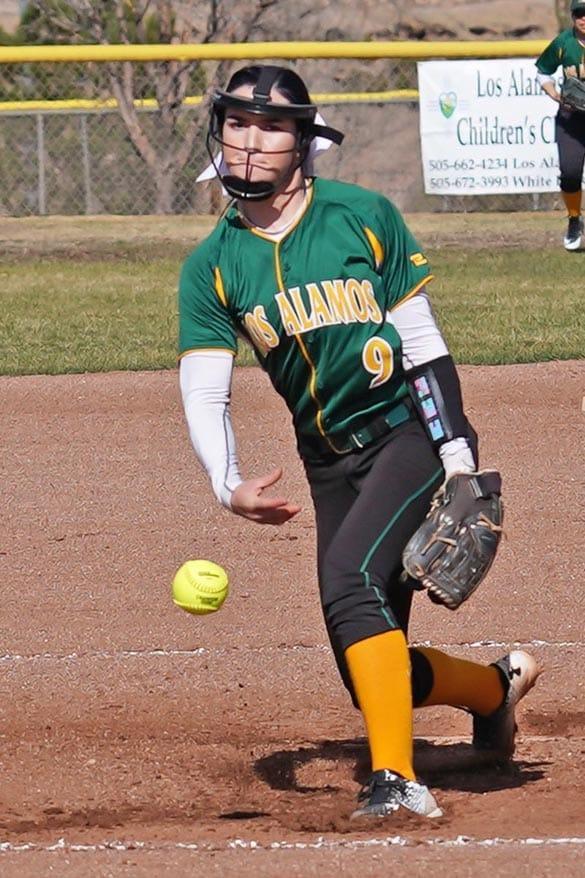 Savana Luster was credited with the win. Photo by John McHale/ladailypost.com

The Los Alamos Hilltopper Softball team only needed two and a half innings to put away Del Norte on Wednesday afternoon, beating the Knights 20-0.

Hilltopper Sophomore pitcher Savana Luster opened the game with three strikeouts, all looking, to give Los Alamos a strong start. Luster would only have to pitch three frames, only facing 10 Knight hitters, giving up three hits and striking out four batters.

Del Norte starting pitcher Luz Portillo faced the entire Los Alamos line up with the first six ‘Toppers scoring before being lifted for a relief pitcher. Portillo picked up the loss giving up six runs on five walks and four hits without recording an out. Portillo was replaced by catcher Terra Sierra who got the next three batters out to end the inning.

Sierra was not as efficient in the second inning. Thirteen of the next 14 ‘Toppers got on base as Los Alamos quickly jumped out to a 14-0 advantage leading to Head Coach Randy Burditt inserting his bench into the game. Burditt also held hit hot-hitting team to a one-base at a time approach to avoid running up the score too much. Regardless, Los Alamos put up 14 second inning runs to take a 20-0 lead.

Luster finished the game by getting the last three outs for the win. “I think a lot of [today’s game] was keeping my head on each batter,” Luster said when asked how she stayed focused after the long breaks between pitching to Del Norte. “It was a good game for us, but I don’t know,” Luster answered when asked if she’s ever been a part of a game where she only had to pitch three innings and win by 20.

After the game, Burditt praised his teams’ effort and dominating performance. “The girls came out and started districts just like we needed to. They set a statement and they hit the ball very well, and Savana pitched very well, and I’m proud of this team for starting out district play on the right foot.”

“I’m really proud of the girls. I have a couple of them playing out of position because we had to shuffle for injury, but they’re still doing good,” Burditt added. The ‘Toppers are down a couple players due to injuries, including starting catcher Jayde Tucker who should rejoin the team next week.

“I think we’re coming together after a rough start, but we’re getting it together just in time for districts,” Luster said about the 6-6 start to the season. “If we play as a team, I think we’re going to crush it the rest of districts.”

Los Alamos is a favorite to win the district 2-5A and play in the NMAA State tournament. 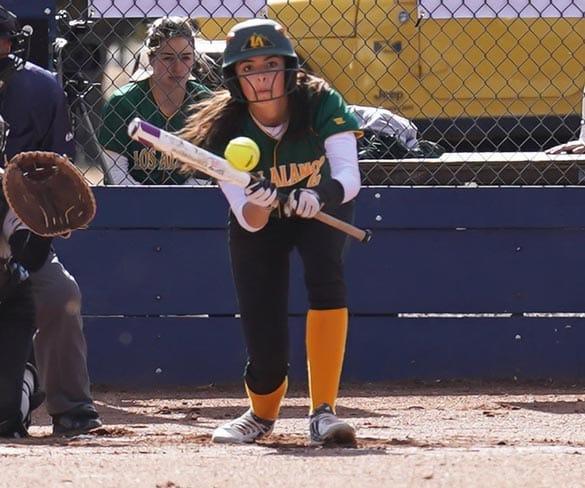 Janessa Gonzales lays  down a bunt attempt in the first inning. Photo by John McHale/ladailypost.com 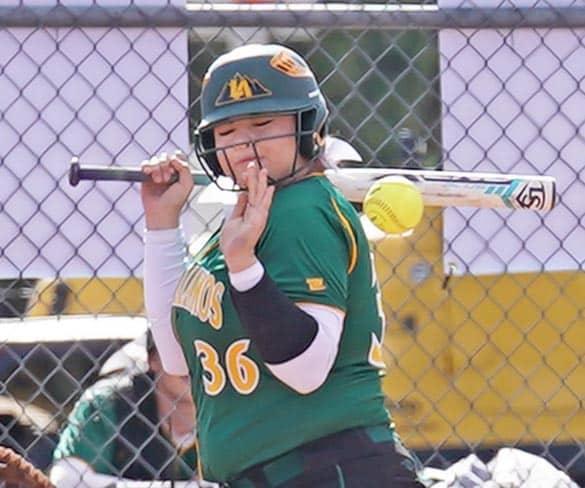 Reyna Lucero gets hit by a pitch in the first inning, which prompted a pitcher changed for the Knights. Photo by John McHale/ladailypost.com 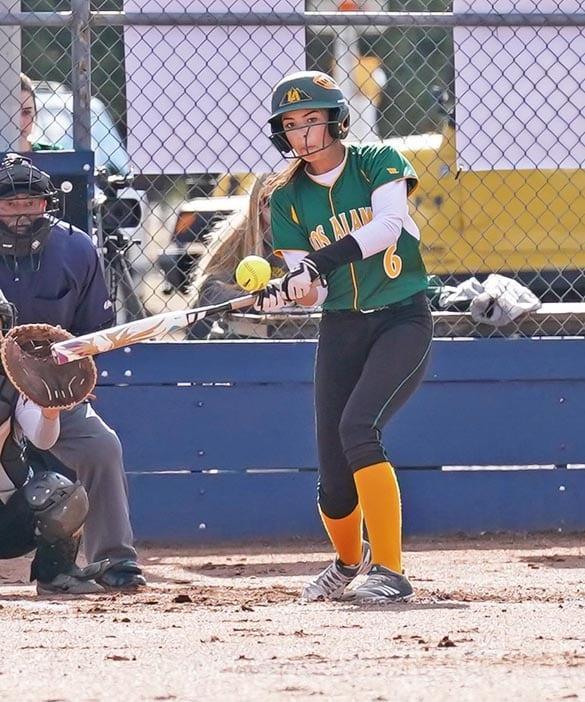 Janessa Gonzales takes her turn at the bat and hits one into short right field. Photo by John McHale/ladailypost.com 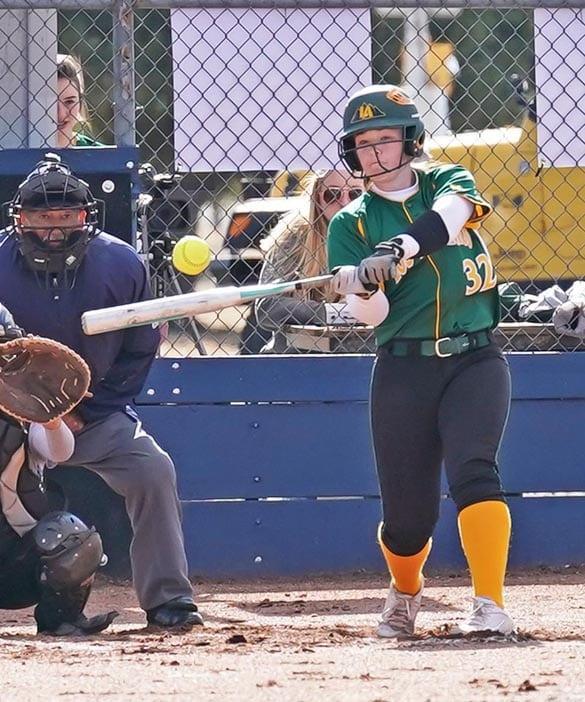 Lauren Harris gets a nice hit in the second inning. Photo by John McHale/ladailypost.com 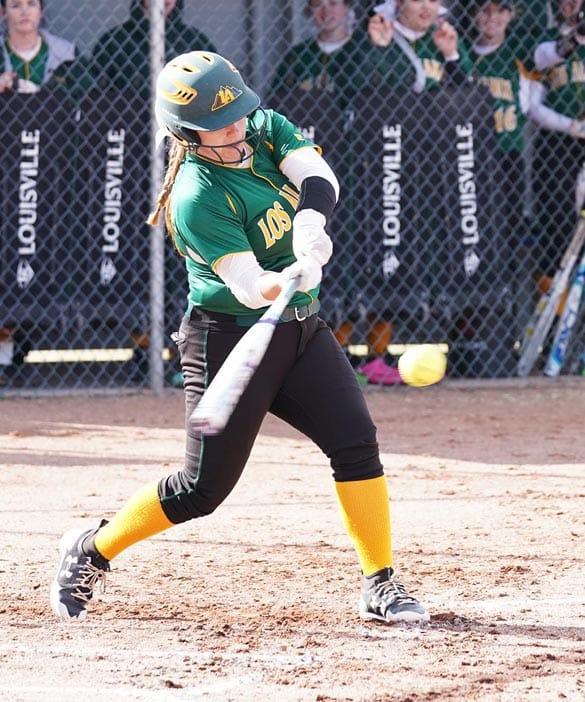 Terri Jaramillo hits a double in the second inning. Photo by John McHale/ladailypost.com 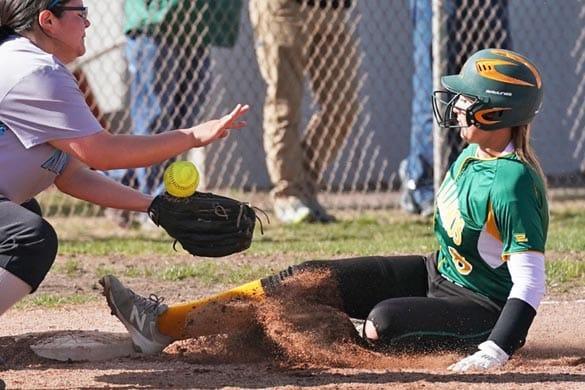 Katie Wimer slides in under the tag after hitting a triple in the closing minutes of the game. Photo by John McHale/ladailypost.com