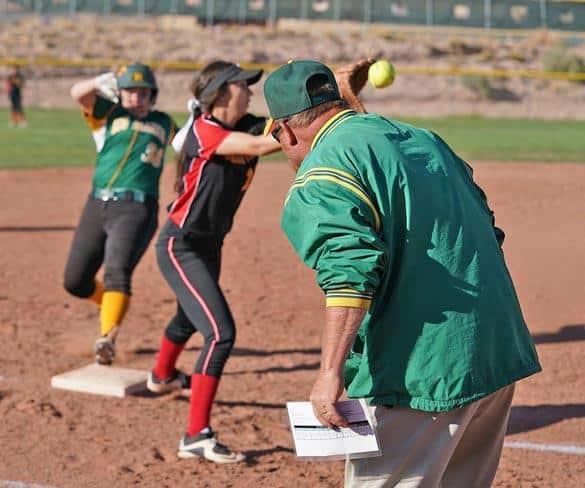 Coach Randy Burditt keeps a close eye on Terri Jaramillo as she comes into third on a close call in the sixth inning. She was safe. The Hilltoppers needed one win to clinch the district title and a win against the struggling Espanola Sundevils seemed like a sure thing. However the Sundevils turned out to be a formidable foe Wednesday afternoon in Espanola, leading the first 3 innings and tying the fourth and fifith innings before the ‘Toppers pulled ahead in the sixth inning to defeat them 13-5, and win the District Title. Photo by John McHale/ladailypost.com 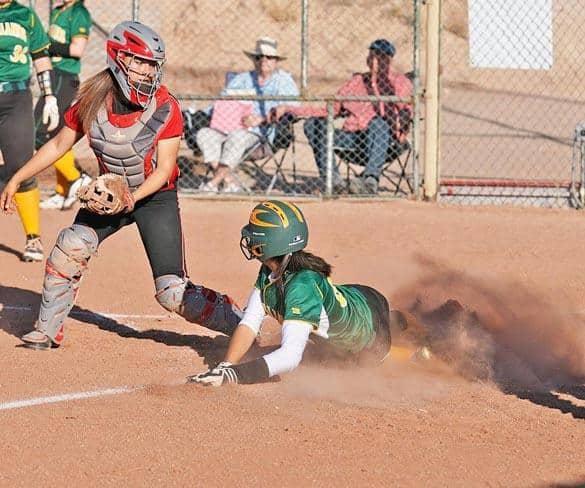 Janessa Gonzales slides into home well ahead of the throw. Photo by John McHale/ladailypost.com

Los Alamos picked up a run in the second inning when Sophomore Claire Bluhm hit an RBI single to score Senior Jayde Tucker.

Down 3-1 in the fourth inning, the Hilltoppers’ sense of urgency returned. Senior Lauren Harris started the inning with a homerun to center field. “I came into the at-bat upset and I knew I just need to calm down because if I take all my anger out on the ball, I would just swing and miss. I just relaxed and waited for my pitch and got one right down the middle and did a nice, easy swing,” Harris said about her homerun. “It was the best feeling in the world.”

Harris finished the game going 3-4, with four RBIs and four runs scored to lead the Hilltoppers. “I’ve had trouble with my hitting at the beginning of the season and at the beginning of districts it was getting better, and it completely came together today. [Española’s] pitcher pitched a perfect speed, and it’s a speed we see in batting practice, so I remembered to just hit like we’re in batting practice,” Harris said about her season.

The Hilltoppers picked up another run in the fourth and tied the game at three.

Los Alamos picked up another two runs in the fifth. Junior Alicia Gonzales smacked a double to left-center field to lead off the inning. Harris and Senior Jordan Jaramillo were walked to load the bases for Bluhm. With two outs, Bluhm hit a clutch base hit to score Gonzales and Harris, giving Los Alamos a 5-3 lead.

Española answered with a pair of runs in the bottom of the fifth to tie the score at five.

The Hilltoppers were able to manufacture eight runs in the sixth and seventh innings to close out the game. All eight runs were scored with two outs in each inning.

After the game, Lucero talked about her 10-strikeout day. “We started out a little rocky, but in the end, we just went out there and got [the win].”

“[Española] is very confident, but we are, too. I came in knowing that they were going to be competitive like they always are. We just had to push and give it everything,” Lucero said about the Sundevils.

Los Alamos needed to win the game versus Española and needed Albuquerque Academy to beat Capital to claim the district title on Wednesday. The Academy/Capital game went into extra innings with the Chargers winning to give the Hilltoppers the title.

“It’s our senior year, so it feels good to go out with a bang. We’ve done it two years in a row,” Lucero said about the district championship.

“We came out a little flat, but Lauren Harris and Claire Bluhm had a heck of a day,” Head Coach Randy Burditt said after the game. “They all stayed steady the whole game and never panicked. I think I was the only one who was nervous and panicking the most because we were hitting like you’ve seen us hit.”

“I’m really happy for the kids, they earned it, I’m just fortunate to be along for the ride,” Burditt said about winning the district championship. “Back to back district champs, that feels good.”

“We’re not finished with districts. We want to win it outright by winning every series,” Burditt added. “We’re still playing for seeding, we don’t want to mess around and get a 12-seed. We want to earn a decent seed and get a shot to make a run at the state tournament.” 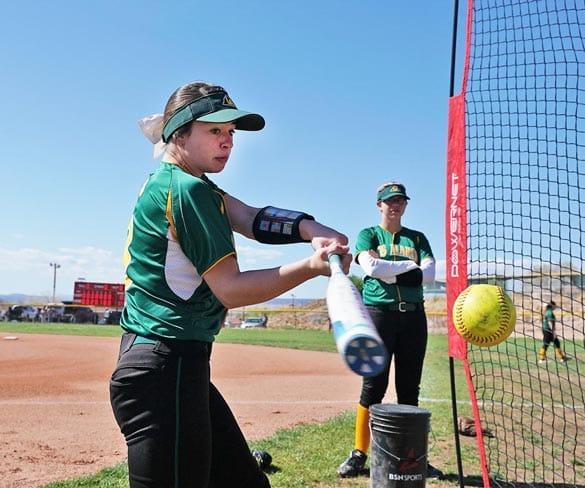 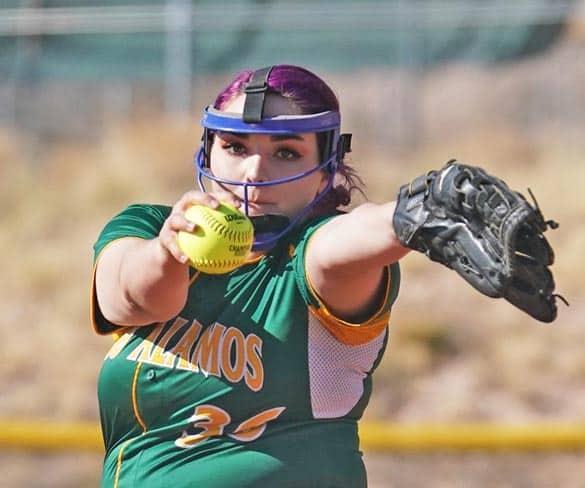 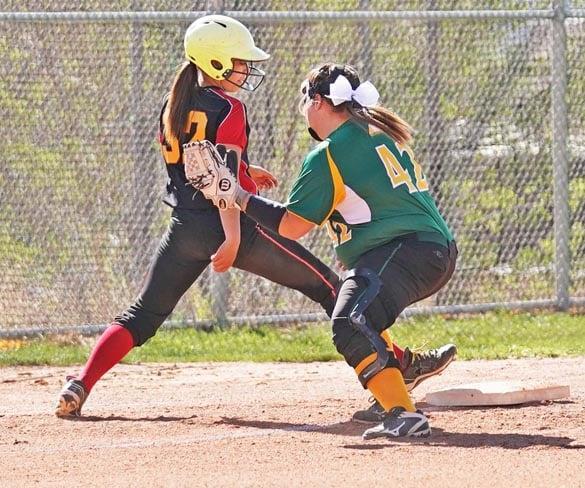 Jordan Jaramillo tags out a runner caught off base in a close call during the first inning. Photo by John McHale/ladailypost.com 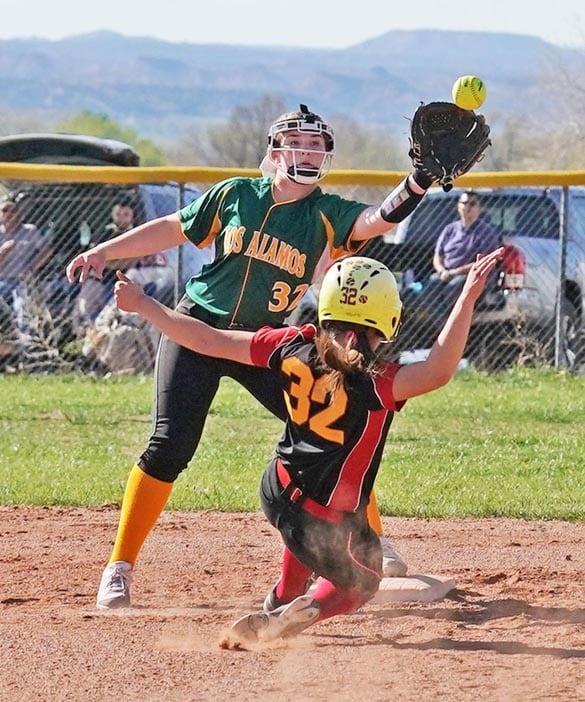 Lauren Harris makes the catch for an out in the third inning. Photo by John McHale/ladailypost.com 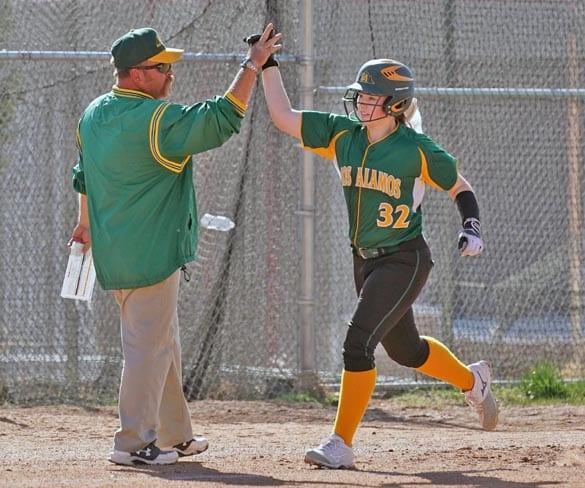 Lauren Harris hit a leadoff homerun in the fourth inning and high fives head coach Randy Burditt as she rounds third base. Photo by John McHale/ladailypost.com 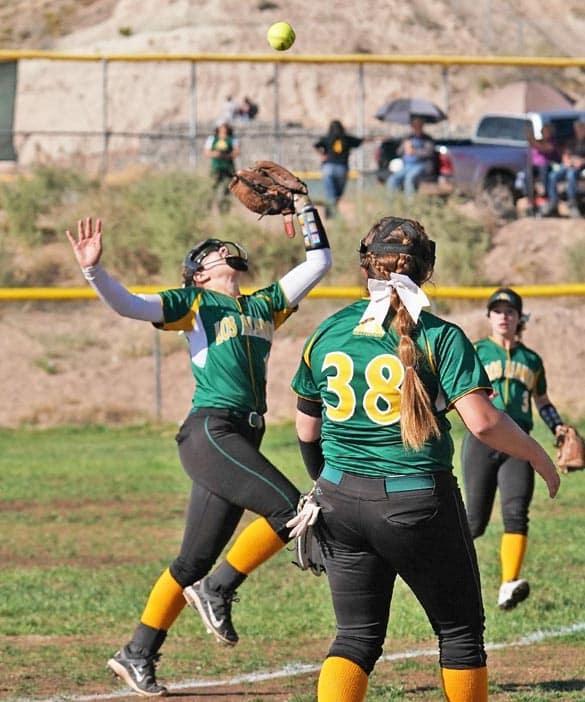 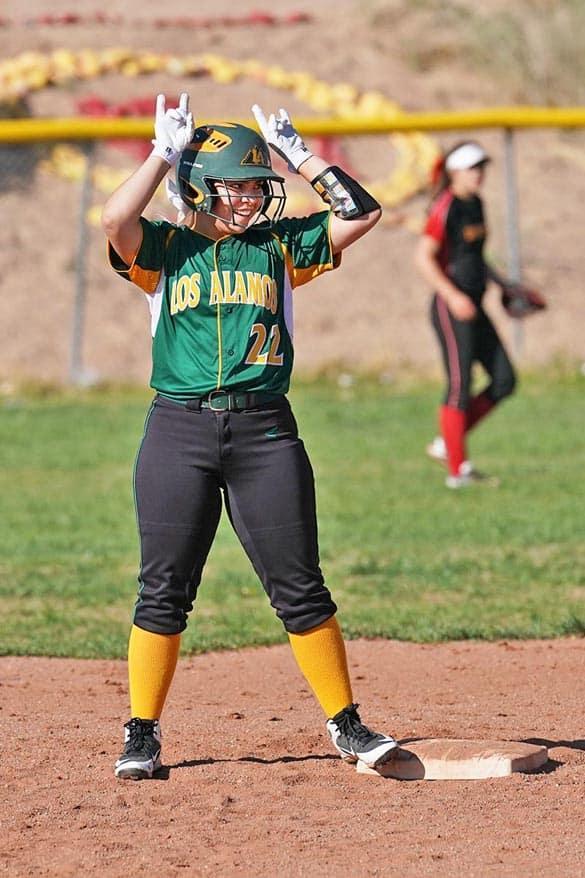 Alicia Gonzales gestures to the dugout after hitting a double in the second inning. Photo by John McHale/ladailypost.com