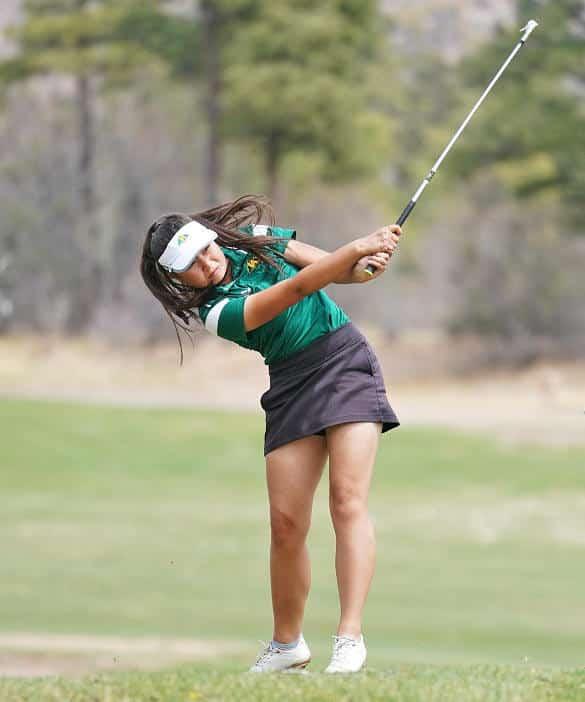 Jessica Osden shoots an iron shot on the 15th green. She was the top girls finisher with a 74 for the day. Photo by John McHale/ladailypost.com

Los Alamos High School Freshman Jessica Osden ran away with the individual championship at the Hilltopper Spring Invitational Monday afternoon at the Los Alamos County Golf Course.
Osden shot a 74, six shots better than second place finisher Carissa Padilla of St. Michael’s High School.
“Jessica is really starting to come into her own. She has finished first or second in every spring tournament thus far. At our spring tournament she shot her best score ever [on] her home course and took first place by six strokes,” head coach Tim Hammock said after the tournament.
Los Alamos Freshman Muira Mowrer shot a 98, while Senior Katrina Mowrer finished with a 105 score.
“I think the Mowrers performed their best this past tournament. Kat’s 105 is the best she’s shot this year and Muira’s 98 was pretty solid. There are a few things we need to work on but I’m pleased with how they performed,” Hammock said.
As a team, Los Alamos finished outside the top three, but Hammock believes his team is poised to make a run after getting his team to full strength.
“We’ve been without our number two golfer this spring. We are hoping to get her back later this week and get her to play in the Shootout in the Desert this coming Monday. Hopefully this will help get her prepared for the district and state tournaments to follow.  I feel if we can go into district and state with a complete and healthy team we will be able to compete at a high level,” Hammock said.
Girls Team
1) St. Michael’s 395
2) Taos 401
3) Robertson 483
No Team Score: Espanola Valley, East Mountain, Hope Christian, Los Alamos, Raton, Santa Fe, Tucumcari
Girls Individual
Los Alamos Individuals
Menu
LOS ALAMOS