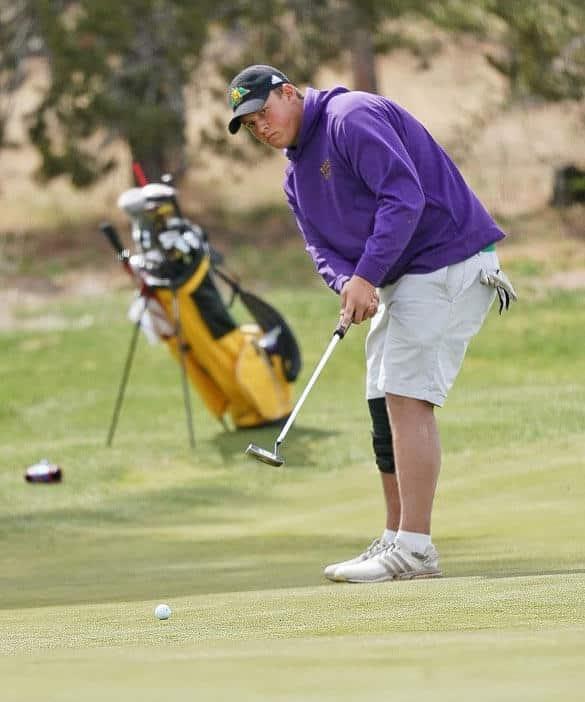 Los Alamos High School golfer Sean Rau was one of the leaders for the Hilltoppers during the Shoot Out In The Desert. Here, he plays at the LAHS Spring Golf Invitational golf tournament held April 16 at the County Golf Course. Photo by John McHale/ladailypost.com

ALBUQUERQUE – The Los Alamos Hilltopper boys golf team captured second place after being invited to participate in the 2018 Shoot Out In The Desert hosted by the Sun Country Amateur Golf Association and New Mexico State University PGA Golf Management Program at the Canyon Club at Four Hills Golf Course.

The event pitted the state’s top golf teams, who were ranked before the tournament using results from tournaments played during the 2017-18 season.

“We played Canyon Club last year for the state championship shooting rounds of 351 and 342. So the 335 today is a bit of an improvement,” Head Coach Anders Ainsworth said after the tournament. “The course was really tough. The greens were super hard and fast. It was a real test, that’s for sure. Bowen Davis’ (Manzano) 68 was an incredible round.”

Manzano’s Davis won the individual title with a score of 68, seven shots better than Trey and Tyler Diehl out of Piedra Vista.

The Hilltoppers were led by Davis Johnson and Sean Rau who both posted 81s to tie for ninth place overall. “Davis Johnson has stepped up in a big way this spring. The kid works. He loves golf and is willing to get uncomfortable to make necessary improvements. I love the kid’s passion for the game,” Ainsworth said of Johnson’s spring play.

“Sean Rau is really starting to come into form. Other than a bad stretch of three holes today, he would have been right in there to place second. His ball striking is getting really solid,” Ainsworth added about his captain.

Although he was happy with the results, Ainsworth admits his team has improvements to make. “We are still making too many costly mistakes. We turned quite a few bogeys into doubles and triples today. We’re at times taking on too much risk when a smarter/safer play is available… Just some basic course management mistakes that we need to tidy up before districts and state. Overall, we are making progress. There is no doubt we are playing better golf than a month ago.”

Up next for the Hilltoppers are the district and state tournaments. Ainsworth acknowledges Los Alamos has a good chance to win it all. “If we want to be successful over the next two weeks, we’re going to need someone to step up and shoot lower individual scores. We have a team of guys that can break 75, we just need to see them do it on tough courses in competition.”