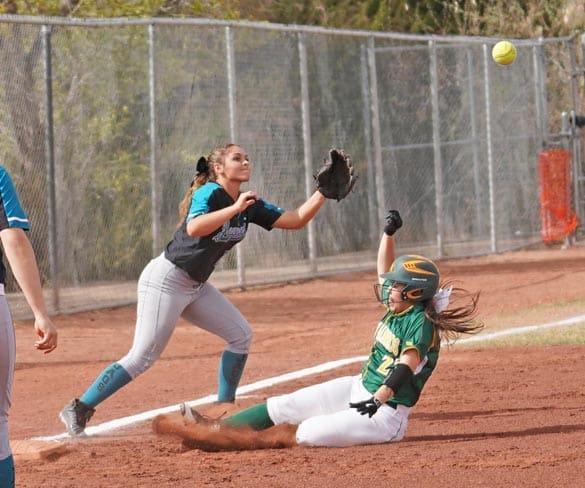 Alicia Gonzales slides into third base ahead of the tag during a previous game against the Capitol Jaguars April 11. Photo by John McHale/ladailypost.com

The Los Alamos Hilltopper softball team picked up a considerable 15-5 win over the Albuquerque Academy Wednesday afternoon, inching within a game of a second consecutive district championship.
The Hilltoppers gained momentum as they picked apart an Academy team who seemed to lose concentration as the game moved along.
After two scoreless innings, Academy manufactured a 1-0 lead of two singles and a hit batter. In the bottom half of the third inning, Junior Alicia Gonzales started a two out rally with a single to center field. She would score one batter later when fellow Junior Janessa Gonzales followed with a triple. Senior Captain Lauren Harris smacked a double to center that was inches away from being a homerun, scoring Janessa Gonzales and upping the Hilltopper lead to 2-1.
Sophomore Katie Wimer, who had a phenomenal pitching performance, reached on an infield single before being lifted for freshman pinch runner Jenna Harris who scored off Senior Captain Jayde Tucker’s triple. Senior Jordan Jaramillo whacked a double scoring Tucker for the 5-1 lead after three innings.
Wimer forced three Academy groundouts as the Chargers went quietly in the top of the fourth inning.
Los Alamos went back to work, again scoring five runs in the frame to grab a 10-1 fourth inning lead.
Academy rallied in the top half of the fifth inning when a hit batter, a single, and an error would load the bases for Charger Senior Lysia Salazar, who crushed a grand slam to center to cut into the Hilltopper lead.
Los Alamos answered the rally in the bottom half of the fifth inning. Junior Megan Romero led off the inning with a triple and scored when sophomore Terri Jaramillo singled one batter later. Alicia Gonzales reached base on an error by the Charger right fielder, who missed an easy pop fly catch. Lauren Harris knocked a single to load the bases.
With one out and the bases loaded Wimer got her revenge, smacking a no-doubt walk-off grand slam to center to beat the Chargers by the mercy rule. Wimer finished the game going 3-4 with 7 RBIs and struck out three from the pitcher circle.
“It was just a really good game for me, and knowing my team had my back when I was pitching was just awesome,” Wimer said after the game. “One bad pitch doesn’t ruin everything, but getting to give it back to them was a really great feeling.”
“[Academy’s] pitcher throws really hard and it allows us to have really good hits off of them,” Lauren Harris said about her 3-4 hitting performance.
Los Alamos has been laser focused since the start of district play, winning nine of 10 games. “I think we got it in our head that we need to win a bunch of games to get to state,” Wimer said about the teams focus.
“Throughout the season we get closer and closer [to the state tournament], and losing a game early in the season helped push us to stay focused,” Harris echoed.
“They’re believing in the philosophy and believing in each other as a team,” head coach Randy Burditt said after the game. “I’m super proud of [the team] and as long as they stay focused, they can do anything.”
Los Alamos has a rare weekend off this weekend. The Hilltoppers have played every Saturday since the end of February.
With the win, Los Alamos can win the district with a Capital HS loss this weekend, or by winning one of their last three games of the season.
The last home series is at 11 a.m. Saturday, April 28, at Overlook Park in White with a double header against Capital.
Menu
LOS ALAMOS