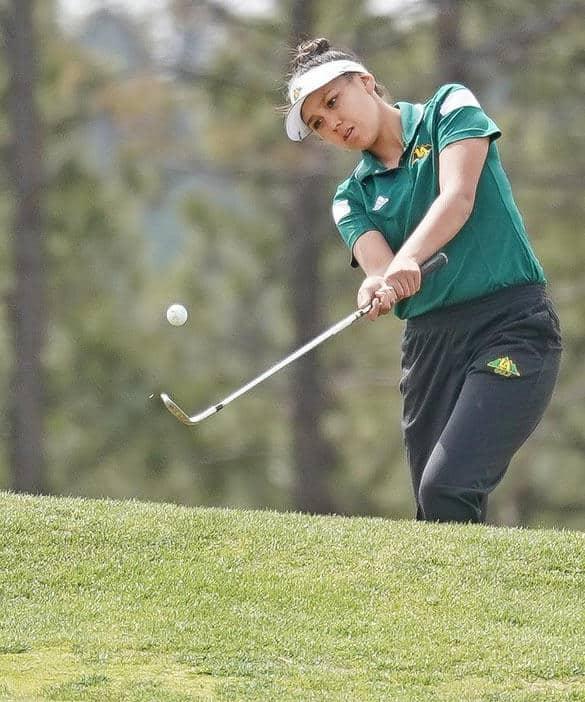 ALBUQUERQUE – The Los Alamos Hilltopper girl’s golf team captured the district 2-5A crown Monday afternoon at the Tanoan Country Club hosted by Albuquerque Academy.
Los Alamos shot a team low 381, 37 strokes less than second place Academy.
The Hilltoppers placed three golfers in the top five, including the top two scorers in Freshman Jessica Osden who won the individual championship, and Muira Mowrer who finished in second place for the tournament.
Head Coach Tim Hammock was especially pleased with the performance of Mowrer. “First off, I’ve got to say wow on the way Muira played. This is the first time she has broken 90 in a tournament, and to do it at a pressured, post-season district tournament is fantastic. She performed beautifully from tee to green all day.”
Hammock said he was also delighted in Osden’s championship round. “Jessica was once again solid for us. She didn’t have the trust in her driver this tournament so she kept it in her bag and used her 3 wood off the tee leaving her a little longer second shot onto the greens on the par fours,” Hammock said. “But she is becoming much more accurate with her irons and that showed today.”
Los Alamos has played the spring portion of the schedule without their number two golfer Leah Mountain. Mountain posted a 97 to finish in fifth place at the district tournament. “It was very nice to get Leah back.  She’s been out for a while and this was her first tournament she has started and finished all spring,” Hammock said about his sophomore. “[Mountain’s] 97, since she’s only been swinging clubs fully since last Thursday, was great. She really grinded it out all day.”
Senior Kat Mowrer rounded out the scoring for Los Alamos with a 113. Although Kat Mowrer is a senior, this is her first year playing golf. “Her 113 score was critical to help keep us in the lead,” Hammock said.
Also getting a chance to play was eighth grader Rosalie Martinez. “It was nice to get our beginner some exposure to varsity play.  I think she was a little nervous in the beginning but she relaxed and produced some nice shots for us.  She has a bright future if she puts the effort into it,” Hammock said about his youngest player.
Up next for the Hilltoppers is the NMAA state tournament being held at the Rockwind Community Links in Hobbs on Monday, May 7. The work isn’t over for Hammock and his team. “We have to get back to practice the rest of this week working on the things we need to improve upon so we can compete against a strong field at the state championship.”
Top Five
1. Jessica Osden –     82 District Champion Los Alamos
2. Muira Mowrer –     89 2nd place Los Alamos
3. Skylar Winckler –     92 3rd place Academy
4. Grace Jorgensen –     93 4th place Academy
5. Leah Mountain –     97 5th place Los Alamos
Menu
Los Alamos
37°
Cloudy
6:38am5:57pm MST
Feels like: 32°F
Wind: 7mph SSE
Humidity: 54%
Pressure: 30.06"Hg
UV index: 0
FriSatSun
46/30°F
46/27°F
43/27°F
Weather forecast Los Alamos, New Mexico ▸