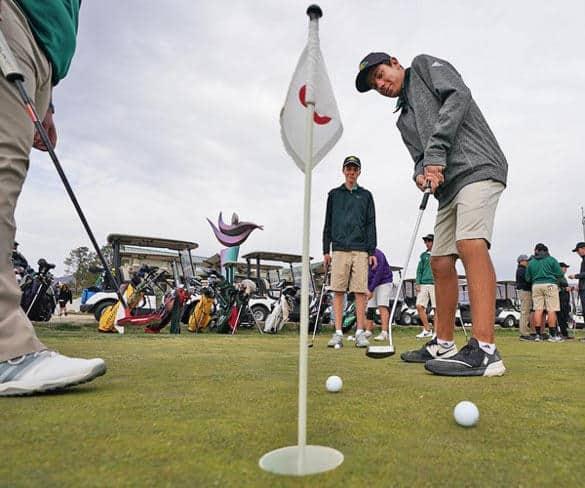 ALBUQUERQUE – The Los Alamos Hilltopper boys’ golf team claimed the district 2-5A championship hosted by Albuquerque Academy Monday afternoon at the Tanoan Country Club.
The Hilltoppers were able to post low scores from multiple players, something Los Alamos has struggled with during the spring portion of the season. “We finally got a really good round,” Head Coach Anders Ainsworth said. “Someone shooting a low score is what we’ve been missing the last few tournaments.”
Sophomore Henry Poston led Los Alamos with a 74 on the day to win the individual championship. “[A] 74 from Henry at Tanoan Country Club is a great round. Henry really played great all day. Henry’s game has been good all spring. I knew a good round was coming soon,” Ainsworth said about Poston.
Ainsworth also praised the play of fellow Sophomore Jacob Benelli. “Jacob shot his first round in the 70’s this spring. Jacob has finally started to hit the ball well over the last week and has gained a ton of confidence since his mid-April struggles.”
Los Alamos finished with four golfers in fourth place, or tied for fourth place, on the day.
The win should give the Hilltoppers plenty of confidence going into the NMAA State Tournament held Monday and Tuesday at the Rockwind Community Links in Hobbs.
“I think the team knows we are in the mix. My message to the team is that we are in control of our performance. That is what we can control,“ Ainsworth said of his approach to the state tournament. “Whoever handles the pressure of the state tournament will win. If we play with composure, we will be in the mix on the back-9 on Tuesday in Hobbs. It will be an awesome experience for our team.”
“We got the best of Academy yesterday, but next week is a whole new tournament. Artesia, last year’s champs, and Lovington made the tournament and they’ve both been playing some really quality golf down south. Lovington won their district championship with a 310,” Ainsworth said about the state tournament. “We played well yesterday and had 315. So, our performance this year has narrowed the tournament to four teams [Los Alamos, Albuquerque Academy, Lovington, and Artesia]. I know the boys are looking forward to the tournament.”
Regardless of the outcome of next week’s state tournament, Ainsworth is very proud of his young team. “You know, this team is always confident. Even when we aren’t playing well they act like change is right around the corner,” Ainsworth  said. “I don’t think winning will change their approach to golf. If anything, it should validate that working hard in anything – school, sports, etc. – produces positive results.”
Team Results
1. Los Alamos 315
2. Albuquerque Academy 340
3. Espanola Valley 435
4. Del Norte 446
5. Capital 457
Individual Results (top 5 were All-District)
1. Henry Poston, Los Alamos 74
2 Jacob Benelli, Los Alamos 79
3. Tay Hwang, Albquerque Academy 80
t4. Sean Rau, Los Alamos 81
t4. Davis Johnson, Los Alamos 81
t4. Neil Parasher, Albuquerque Academy 81
Los Alamos Scores
Henry Poston 74
Jacob Benelli 79
Sean Rau 81
Davis Johnson 81
Landon Burk 95
Menu
Los Alamos
34°
Clear
7:10am5:24pm MST
Feels like: 28°F
Wind: 6mph SW
Humidity: 40%
Pressure: 30.07"Hg
UV index: 0
MonTueWed
46/27°F
43/19°F
36/19°F
Weather forecast Los Alamos, New Mexico ▸