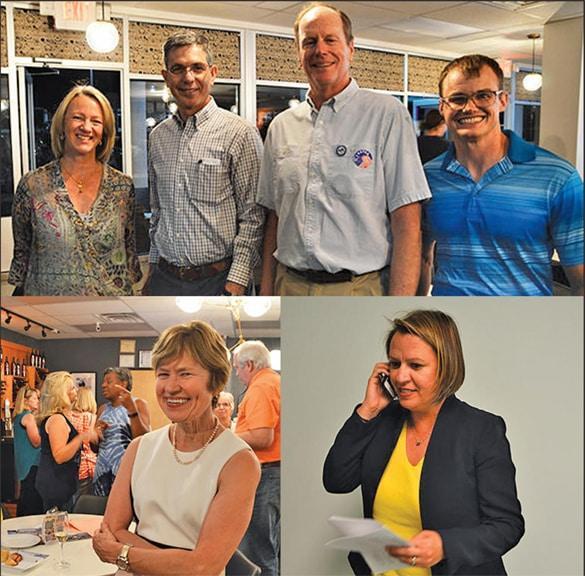 Tuesday night’s primary election was described by one candidate as a “nail biter.” Indeed, there were several close results in Los Alamos for both local and state public offices. Still, the mood seemed hopeful and excited in the Municipal Building as candidates and members of the public waited for the final numbers to be announced.

Highlights from the election:
Democratic candidates David Izraelevitz, Sara Scott, Randall Ryti and James Robinson will continue into the general election for County Council. Republicans Brady Burke, Dawn Trujillo Voss and John Bliss as well as Libertarian Helen Milenski also will be on the November ballot for County Council.

Several candidates offered their thoughts regarding the election.

“Thank you Los Alamos and District 43. I’m looking forward to running a strong, issue-oriented campaign in the general election that is focused on improving people’s lives,” Chandler said.

In a written statement, Shin said, “I commend Pete Sheehey and Chris Chandler for their hard fought campaigns; they have invested a tremendous amount of time and energy while serving on our County Council. I congratulate Chris Chandler on her win, and also look forward to a strong, issues-driven campaign. Consider the recent DOE award to clean up our environment. It has brought more jobs to our District, our economy and our housing market are booming. People in D43 (District 43) are simply not interested in single payer health care and universal pre-K.  Instead of expanding the role of government, let’s engage the private sector and allow more choices for individuals and families. That is my message and core principle;  I believe it resonates with working class families everywhere. We both want to improve people’s lives, but we have vastly different ways of getting there,” she said.

Izraelevitz, who is County Council chair, said, “I was very appreciative of the support I received in the community and I want to thank everyone who voted for me.”

He added he also is thankful for all those who showed support by placing signs in their yards, offering endorsements and other efforts. Going into general election, Izraelevitz said he is looking forward to discussing issues significant to the community such as the lab contract, housing  and tourism.

Scott also thanked all those who supported her campaign as well as those who shared their insights about Los Alamos with her. “It really made a difference,” she said.
Going into the general election, Scott said, “I’m definitely looking ahead  and will continue to work hard to have the opportunity to serve our community.”

Robinson said, “I’m very excited I was able to make it through to the top four candidates.” He added he is eager to go out into the community and learn what people want from their councilors as well share  his vision for Los Alamos’ future.

Not only is Garcia Richard the first woman nominee for Land Commissioner but she said Los Alamos County had the largest margin for any county in the land commission race. “I’m so gratified by that response,” she said.