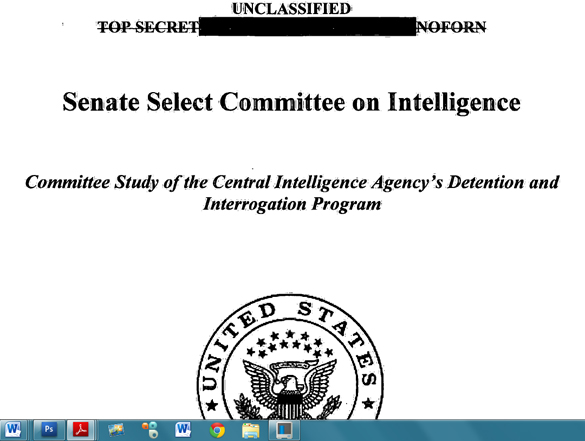 WASHINGTON, D.C. – U.S. Sen. Martin Heinrich, D-N.M., a member of the U.S. Senate Select Committee on Intelligence, will deliver the following remarks today on the release of the executive summary and the findings and conclusions of the committee’s five-year review of the CIA’s detention and interrogation program. Senator Heinrich has been a leading proponent of declassifying the report.

A copy of the report is available HERE.

Heinrich’s remarks as prepared for delivery are below:

Torture is wrong; it is un-American; and it doesn’t work.

Recognizing these important realities, the President signed an Executive Order in January 2009 that limited interrogations by any American personnel to the guidelines in the Army Field Manual, and reinforcing the commitment that prisoners in U.S. custody are entitled to rights under the Geneva Conventions.

This closed the book on the Bush Administration’s interrogation program.

But make no mistake. These weren’t just “enhanced interrogations.” This was torture.

Releasing the Intelligence Committee’s study of the CIA’s detention and interrogation program to the American people today will finally provide a thorough accounting of what happened and how it happened.  In addition, I hope that this process helps to ensure that it never, ever happens again.

This was a grave chapter in our history.  The actions taken under this program cost our nation global credibility and they put the lives of Americans at risk.

Some have suggested that releasing this report could put American lives at risk. Let’s be clear, it has been the use of torture that puts Americans unnecessarily in harm’s way.

There is no question that there will never be a “good time” to release this study.  We all know that for months now terrorists in the extremist group Isis have been kidnapping and barbarically killing innocent Americans because of what we, as a nation, stand for.

The response to their threats and terrorism should not be for us to change our American values.  It should be to stand firm in our values and work with our allies to root out extremism and terrorism in all its forms.

The release of this study will finally let us face what was done in the name of the American people, and allow for future generations to use these findings to learn from the mistakes made by the architects of this program.

This is an objective and fact-based study.  It is a fair study.  And it is the only comprehensive study conducted of this program and the CIA’s treatment of its detainees in the aftermath of the September 11th attacks.

Today marks an enormous, if painful step in the right direction.

It is important to know that these torture methods were the brainchild of a few CIA officials and their contractors.  When I joined the Intelligence Committee two years ago, I began to read the classified report material and was surprised to learn this.  Frankly, it was not consistent with my assumptions.  It wasn’t what my prejudices told me to expect.  That is why a fact-based accounting is so very important.

Furthermore, it is important to know that at every turn, CIA leadership avoided Congressional oversight, and even worse, misled Congress.

The CIA deliberately kept the vast majority of the Senate and House Intelligence Committees in the dark on the interrogation techniques until the day the president revealed the detention and interrogation program to the world in 2006 – four years after it began.

Myths of the effectiveness of torture have been repeated; perpetrating the fable that this was a necessary program that saved lives.

The Committee examined the CIA’s claims of plots thwarted and detainees captured as a result of intelligence gained through torture.

In each and every case, the Committee found that the intelligence was already available from other sources or provided by the detainees themselves before they were tortured.

However, we need to stop treating the issue of torture as one worthy of debate over its practical merits.  This is about torture being immoral. Being un-American.

Reducing a human being to a state of despair through systematic subjugation, pain, and humiliation is unquestionably immoral.

It should never happen again with the blessing of the American government.  As my friend and colleague, Senator Angus King said in an interview this morning, “This is not America.  This is not who we are.”

The information in the study released today to the public will finally pull back the curtain on the terrible judgment that went into creating and implementing this interrogation program.

The decision to use these techniques and the defense of the program were the work of a small number of people at the CIA.

This study is in no way a condemnation of the thousands of men and women at this great agency who work tirelessly every day to protect and defend our nation from very real and imminent threats using lawful and effective measures.

In fact, the insistence that so many intelligence successes are the result of “enhanced interrogations” negates and marginalizes the effective work done by hundreds of other CIA officers not involved in these activities.

What this study does is to show that multiple levels of government were misled about the effectiveness of these techniques. If secretive government agencies want to operate in a democracy, there must be trust and transparency with those tasked with oversight.

As the Committee carries out future oversight, we will benefit from the lessons in this study.  And I hope we never let the challenges of our difficult times used as an excuse to frustrate and defer oversight the way it was in the early years covered by this report.

Although President Obama ended the program by signing the Executive Order in 2009, any future president could reverse that order.

It is worth remembering that years before this detention and interrogation program even began, the CIA had sworn off the harsh interrogations of its past; but in the wake of the terrorist attacks against the United States, it repeated those mistakes by once again engaging in brutal interrogations that undermined our nation’s credibility on the issue of human rights, produced information of dubious value, and wasted millions of taxpayer dollars.

The public interest in this issue has centered on the personalities involved, and the political battle waged in the release of this study.  But those stories are reductive, and I hope they will soon pass.

Because the story of what happened in the CIA’s detention and interrogation program — and how it happened — is too important, and needs to be fully understood so that future generations will not make the same mistakes our country made out of anger, fear, and expediency.

When America engages in these acts with authorization from the highest levels of government, we invite others to treat our citizens the same way.

This study should serve as a warning to those who would make similar choices in the future.

Let us learn from the mistakes of the past — and let us never, ever repeat these mistakes.

Before I close, I’d like to acknowledge that the Intelligence Committee’s study of the CIA’s detention and interrogation program represents many years of hard work by Members and staff who faced incredible obstacles in completing their work.

The fact that this study was finished is a testament to the dedication and focus of Chairmen Rockefeller and Chair Feinstein in deciding that oversight is our job, regardless of how long it takes.