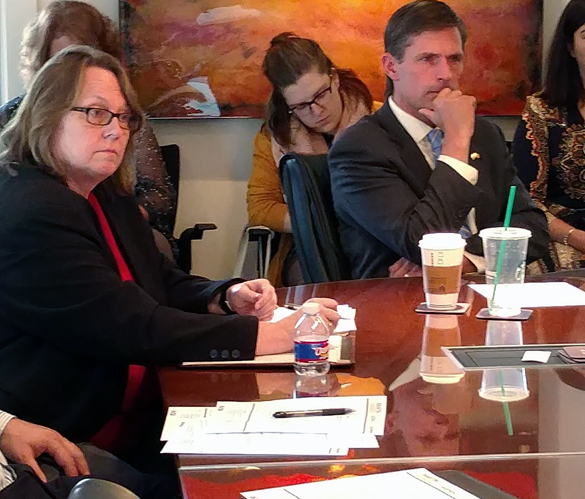 Millennials were on the menu Wednesday, as administrators from seven Northern New Mexico colleges and universities met with community and human resources officials from Los Alamos National Laboratory to digest the implications of a generational shift that is affecting much of the country. Members of the Millennial Generation (a cohort of the population born since about 1980) are coming aboard.

LANL has seen the shift coming, has crunched the numbers and concluded that retiring Baby Boomers combined with normal employee attrition will mean a combined turnover of about 2,500 employees over the next five years.

“I thought it would be a great time to pull folks together and make sure we’re doing everything we can to align our higher education to some of those needs to make sure we have the kind of in-depth representation from NM in as many of those jobs as we can,” said Sen. Martin Heinrich, D-NM, as he kicked off a brainstorming meeting in Santa Fe.

These are not new jobs, the LANL officials said, but replacement for anticipated vacancies: about 675 research and development scientists, 375 science and engineering support people, facility engineers, operations support engineers, mechanical technicians, who keep the laboratory infrastructure up and running. There are 700 jobs expected to open in the business support category, more than 1 out of 3 current employees, and another 675 expected in the program-related occupations, which include the people who oversee radiological control tests, one of several specialties where the lab always seems to have vacancies.

Other hard to find professionals include safety analysts and electricians. LANL finds itself competing with much of the country, including Silicon Valley for high performance computer specialists.

An administrative assistant position, on the other hand, had 68 applications, and a notice for a communication person had 53 responses, according to Carole Rutten of LANL’s Community Relations and Programs Office. As Rutten noted, LANL has been collaborating with the higher education community for a number of years with grants, scholarships, technical facilities and intern programs.

The community college administrators shared ideas and mutual concerns about widening the pipeline for employment opportunities at the national laboratories and identifying the barriers that need to be overcome. Several participants emphasized the need for early childhood education and stressed the importance of grabbing youngsters’ attention as early as possible. They also talked about the soft skills needed to succeed in the workplace, from writing resumes appropriate to the job to maintaining a high grade point average and keeping a clean background record.

To inspire prospective science and technology students, Cindy Rooney, chief executive officer of the University of New Mexico-Los Alamos branch campus, encouraged her counterparts to send some students to the LANL student symposium in August. “Without a doubt, they will be inspired,” she said.

Along with other educators, Rooney noted the changing educational needs of the younger population. “We do a lot of customized training,” she said. “It doesn’t always have an academic credit.” It turned out the people who were interested in studying cyber security weren’t interested in a degree, she said, “So we had workshops.”

With the current percentage of New Mexico employees at LANL at about 40 percent, Heinrich was asked what sort of goal he had in mind in calling the meeting, Heinrich said, “I’d love to see the 40 percent trending upwards. If it were 50 percent that would be better.”

Heinrich encouraged the participants to “think about the next steps that we can help facilitate, how we can be collaborative rather than competitive.”

New Mexico Highlands University President Sam Minner was on the same wavelength. There could be ways to cooperate in marketing and outreach measures that could increase the pipeline funnel, he suggested. “If we collaborated like that, it would improve our fundraising opportunities.”