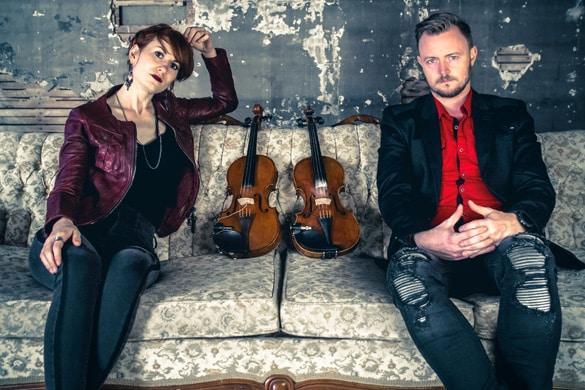 Join two master fiddlers for a unique concert 7:30 p.m. Saturday Feb. 24 “under the stars” in the Planetarium at the Los Alamos Nature Center at 2600 Canyon Road.

House of Hamill is an acoustic duo from Philadelphia, consisting of Rose Baldino and Brian Buchanan, both accomplished fiddlers and violinists. There is a suggested donation of $15. To reserve one of the limited number of seats, contact Lucy Frey (lucille.frey@gmail.com) or take a chance at the door.

Between them, the two young performers have more than 25 years of writing and performance experience. Together, they write unusual new fiddle tunes and exciting, unpredictable original songs while also breathing new life into traditional and contemporary music by other people. Both are confident lead vocalists, and the blend of their two voices in harmony is hypnotic and irresistible.

After crossing paths with each other on the music circuit as members of Enter the Haggis (Buchanan) and Burning Bridget Cleary (Baldino), the two ended up sharing a stage and forming a bond over “a love of Irish fiddle tunes, Radiohead and 4 a.m. whiskey,” about three years ago, according to their website, houseofhamill.com.

A few months later Buchanan moved from Canada to Philadelphia, and as a tribute to the first tune Baldino ever taught Buchanan, House of Hamill was born. Love bloomed, as well as harmony, and the couple were married in June.

The two bring out each other’s strengths as musicians, Baldino said. Both started as classical violinists and were turned on to fiddle music when they were young.

“I was on the verge of quitting when my mom signed me up for fiddle lessons around age 13,” Baldino remembered. “I became obsessed! This kind of music is fun to play and there’s so much room for creativity.”

Their music might be described as “Indy/Irish” according to Baldino. Their second albumn contains six original songs, one cover and “a bunch of instrumentals” she said. Their debut album “Wide Awake“, in September 2016, contains a similar mix.

Baldino just finished an MA in counseling, and with school behind her, House of Hamill has a busy tour schedule ahead of them over the coming months. In addition to the Los Alamos show, the duo is performing two more shows in New Mexico: at noon Friday, Feb. 23 at the Los Griegos Library in Albuquerque (free) and 3:30 p.m. Sunday, Feb. 25 at the Oddfellows Hall. A $15 donation is suggested for that show. Be sure to come at 3 p.m. for ceilidh dancing.

New Mexico fan Lucy Frey is responsible for organizing the concerts in this area, Baldino said. Frey is a big fan of Enter the Haggis, with which Buchanan continues to perform, and thereby discovered House of Hamill and wanted to help bring the band to New Mexico.

Find out how versatile traditional instruments can be, whether House of Hamill is performing soulful ballads or foot stamping jigs and reels. This concert should be a great evening, no matter your musical tastes.