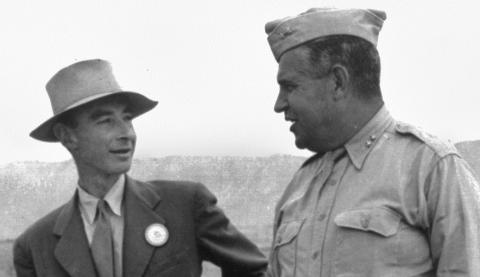 Sixty-nine years after the Trinity Test on July 16, 1945, the public can listen to the voices of those whose atomic achievements changed the course of world history, politics, science and society.

The interviews provide novel insight into the minds of the men and women who built the world’s first atomic bombs.

“I was more worried about the campaign in Africa and the campaign in Russia when I went to New Mexico than I was about the Germans making a bomb. I thought they might very well be winning the war,” Oppenheimer recalled.

More than half a million people worked on the Manhattan Project at top-secret sites around the country. Today, only a small fraction of Manhattan Project veterans are still alive, and most of the key scientists passed away decades ago. Fortunately, AHF has been able to acquire the collections of three enterprising authors who conducted interviews with some of the luminaries as early as the 1960s.

In 1965, Stephane Groueff interviewed dozens of Manhattan Project principals for his book, “The Manhattan Project,” the first comprehensive history of the project written for the general public. In 1985, journalist S. L. Sanger spent his sabbatical from the Seattle Times travelling 11,000 miles to interview dozens of former Hanford workers. In the late 1980s, Richard Rhodes recorded in-depth interviews for his nuclear history works.

AHF was given permission to use the oral histories by Boston University Howard Gotlieb Archival Research Center, which houses the Groueff Collection, S. L. Sanger and Richard Rhodes

“Hearing the voices of the participants truly makes the history come alive,” AHF Program Manager Alexandra Levy said. “The 12 hours of recordings of General Groves are incredible. They range from his controversial selection of J. Robert Oppenheimer as head of the weapons laboratory to his vigil during the Hiroshima bombing mission.”

Of the 180 interviews in these three collections, AHF has finished processing 30, which are now on the Voices of the Manhattan Project website. In addition to General Groves and an hour interview with his wife Grace, the public can listen to interviews with many notables including Edward Teller, Colonel Franklin Matthias, James B. Conant, Philip Abelson, Herbert Anderson, Leona Woods Marshall and Nicholas Metropolis.