Heading Into The Unknown… 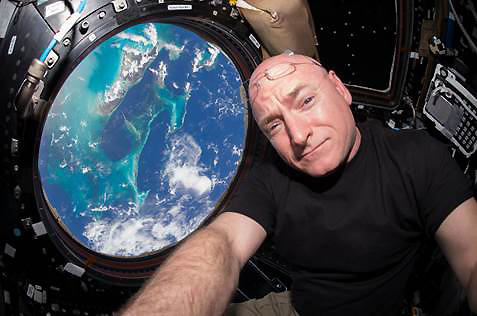 NASA astronaut Scott Kelly takes a selfie with the Bahamas from 250 miles above Earth aboard the International Space Station. Courtesy/NASA
By SCOTT KELLY
NASA Astronaut

Almost everything we know about living in space ends at six months. Now that I am at the midpoint of my mission, heading into the second half of one year in space aboard the International Space Station, I am looking forward to exploring the science of this uncharted territory and stepping into the unknown.

My Russian colleague Mikhail Kornienko and I are living in space for one year to push the edge of our scientific understanding. To add in another dynamic, researchers are conducting “twin studies” to compare the subtle effects and changes in spaceflight as compared to Earth by studying my twin brother and I, two individuals who have almost identical genetics, but are in different environments for one year. We hope that the knowledge gained on this mission will benefit the Earth and that the data collected will help send humans to new destinations, supporting the next generation of space exploration.

Whether it is living in low Earth orbit for one year or a two year mission to the Red Planet, I have learned that human potential is limitless and we should never stop pushing the boundaries of exploration.

Thank you for supporting me and joining me on this mission. I am posting on social media with the hope that I can bring all of you on Earth along for the ride. I want to inspire you to reach further for your dreams and know that anything is possible.

The people who make International Space Station operations possible, the flight controllers watching over our ship 24-7-365, and the researchers analyzing the data we get back have invested their careers and lives to this mission to serve the United States and inspire the next generation.

I have traveled 72 million miles around Earth in the past 171 days — flying at 17,500mph — and have had the opportunity to experience our home planet from an incredible perspective. When I come home in March, I will have orbited the Earth 5,472 times traveling 141.7 million statute miles and spent more time in space than any U.S. astronaut in history. Please join me for the next six months of my mission — as I reach these milestones and continue NASA’s work off the Earth, for the Earth.