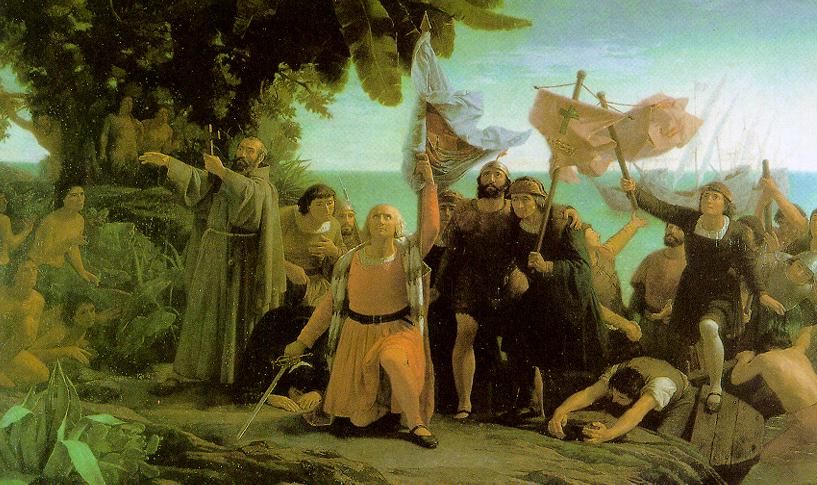 First Landing of Columbus on the Shores of the New World; painting by Dióscoro Puebla (1862). Courtesy/wikipedia

Today is Columbus Day and some organizations are open and others closed around the local area.

Many countries in the New World and elsewhere officially celebrate as a holiday the anniversary of Christopher Columbus’ arrival in the Americas, which happened Oct. 12, 1492.

These holidays have been celebrated unofficially since the late 18th century and officially in various areas since the early 20th century.

Hawaii celebrates Discoverers’ Day, which commemorates the Polynesian discoverers of Hawaii on the same date, the second Monday of October, though the name change has not ended protest related to the observance of Columbus’ discovery. The state government does not treat either Columbus Day or Discoverers’ Day as a legal holiday; state, city and county government offices and schools are open for business.

South Dakota celebrates the day as an official state holiday known as “Native American Day” rather than Columbus Day.

Oregon does not recognize Columbus Day, neither as a holiday nor a commemoration; schools and public offices remain open. Iowa and Nevada do not celebrate Columbus Day as an official holiday; however, the governor is “authorized and requested” by statute to proclaim the day each year.

Several other states have removed Columbus Day as a paid holiday for government workers while still maintaining it either as a day of recognition or a legal holiday for other purposes. These include California and Texas.

The city of Berkeley, Calif., has replaced Columbus Day with Indigenous People’s Day since 1992, a move which has been followed by several other localities including Sebastopol and Santa Cruz, Calif.; Dane County, Wisc.; Minneapolis-Saint Paul, Minn.; and Seattle, Wash. Various tribal governments in Oklahoma designate the day “Native American Day”, or name the day after their own tribe.