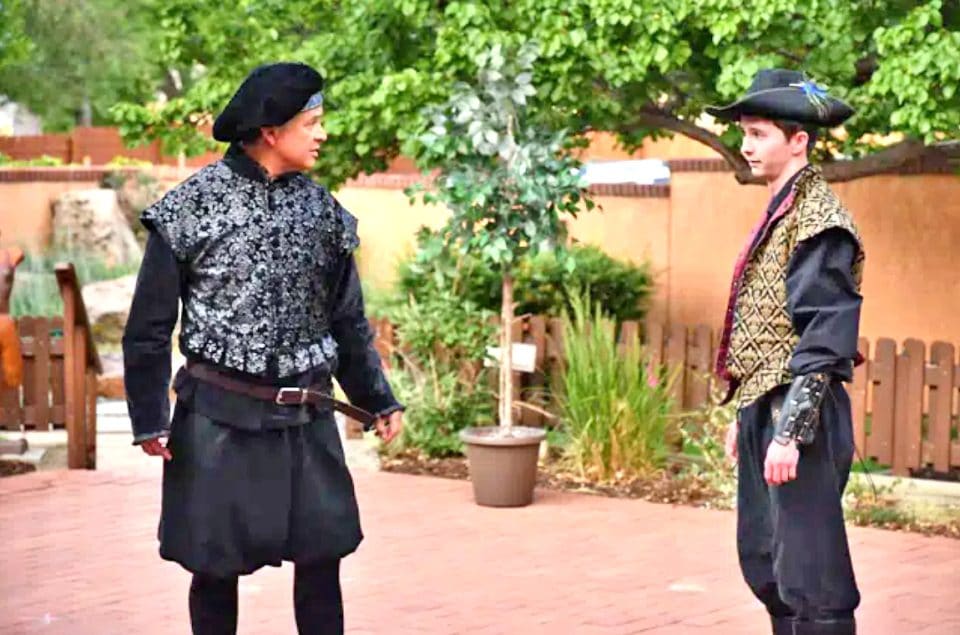 Scene from Hamlet, which kicks off the 2022 Santa Fe Summer Shakespeare Festival. Courtesy/UCS

Upstart Crows of Santa Fe (UCSF) and The Shakespeare Gym have announced their collaboration on a production of Hamlet, which will kick off the 2022 Santa Fe Summer Shakespeare Festival.

Hamlet, outdoors, under the stars, in the ruin of a castle right here in Santa Fe. The play will perform at Seton Castle, May 27, 28, 29 and June 3, 4, 5 with a cast of actors who are approximately the same ages as their characters.

Thus, Hamlet, Laertes, Ophelia, Horatio, Rosencrantz, and Guildenstern are played by teens (as university students would have been at that time), while Claudius, Gertrude, Polonius, the Ghost and assorted others will be played by adult Gym actors. Two different casts will perform on alternative nights in modern dress.

Upstart Crows of Santa Fe are a Shakespeare troupe for young people 10-18. They produce workshops and uncut plays with a focus on understanding and collaboration. Casts create productions from deep explorations of Shakespeare’s language and meaning.

The Shakespeare Gym is a place for Santa Feans to develop strategies for acting Shakespeare. Through workshops and performances, Gym members learn to “fit the action to the word”, find acting cues in the text, and bring Shakespeare’s language to life. With online and in-person programming, the Gym offers a variety of ways to work out with Shakespeare’s plays.