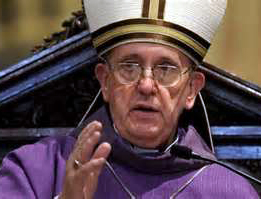 Top Ranking Cardinal Deacon Jean-Louis Tauran emerged onto the balcony of St. Peter’s Basilica in Rome today and confirmed “Habemus papam” (We have a pope.)

The 115 cardinals of the Roman Catholic Church tasked with electing the 266th successor of Peter have named Cardinal Jorge Mario Bergoglio, S.J., Archbishop of Buenos Aires, Argentina, as pope to succeed Benedict XVI.

The new pope, born Dec. 17, 1936 in Buenos Aires has taken the name Pope Francis 1. He was ordained for the Jesuits Dec. 13, 1969 during his theological studies at the Theological Faculty of San Miguel.

He was novice master in San Miguel, where he also taught theology. He was Provincial for Argentina (1973-1979) and rector of the Philosophical and Theological Faculty of San Miguel (1980-1986.)

After completing his doctoral dissertation in Germany, he served as a confessor and spiritual director in Córdoba.

May 20, 1992 he was appointed titular Bishop of Auca and Auxiliary of Buenos Aires, receiving episcopal consecration on June 27.

On June 3, 1997, he was appointed Coadjutor Archbishop of Buenos Aires and succeeded Cardinal Antonio Quarracino on Feb. 28, 1998.

He also is Ordinary for Eastern-rite faithful in Argentina who lack an Ordinary of their own rite. Adjunct Relator General of the 10th Ordinary General Assembly of the Synod of Bishops, October 2001. He served as President of the Bishops’ Conference of Argentina from Nov. 8, 2005 until Nov. 8, 2011.

The ballots and any notes or tallies individual cardinals made are burned in one stove. The other stove burns special chemical cartridges designed to create clouds of black or white smoke for a full seven minutes.

To improve the draught, making sure the smoke goes up and out instead of filling the Sistine Chapel with smoke as occurred in 2005, the pipes leading to the roof are pre-heated with an electrical current.