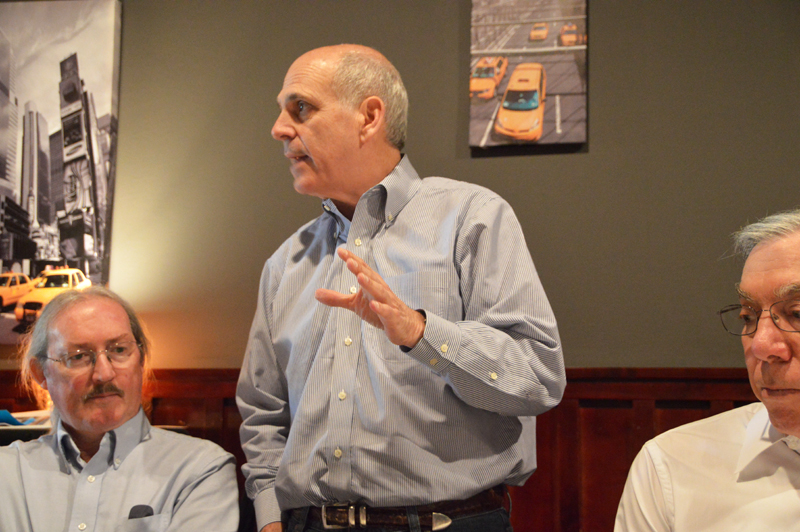 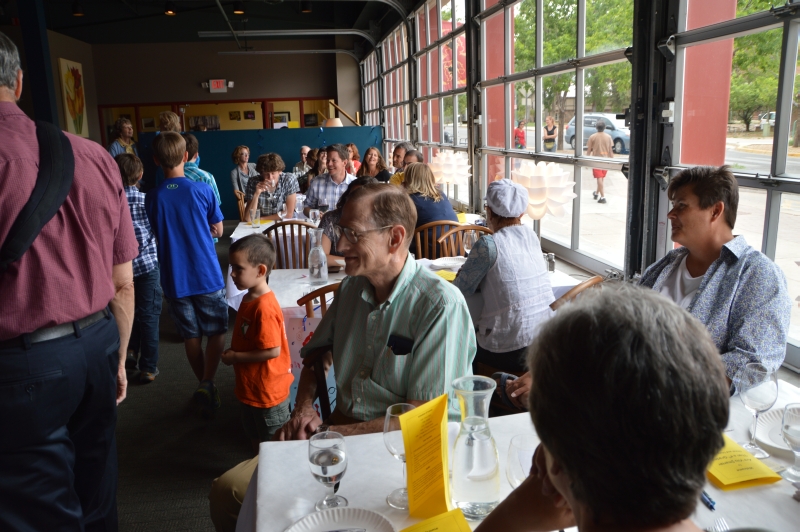 Gubernatorial candidate Alan Webber addresses a May 14 gathering of business and community leaders. Photo by Carol A. Clark/ladailypost.com

Discussion at the May 14 meeting centered on efforts underway and planned in technology commercialization, job creation and educating the workforce. Webber discussed his background saying that he is a progressive Democrat running for governor of New Mexico. He grew up in a working class home in Missouri, the son of a camera salesman. His parents sacrificed a lot so their kids could have a better life and they were strong believers that education is the pathway to a brighter future, he said, adding that his father—despite working extremely long hours to provide for his family—dedicated a lot of time to school, including volunteering as head of his children’s PTA.

“Our economy won’t grow from the outside-in. The way to grow New Mexico’s economy is from the ground up—by supporting and investing in the local businesses that are the lifeblood of New Mexico’s communities,” Webber said. “We have all of the resources and talent we need right here, right now, to turn our biggest challenges into our greatest opportunities. We can close the jobs gap … it will take a combination of bold ideas and common-sense programs—plus a lot of hard work, creativity and commitment.  We can do it, but we have to start now.”

Webber explained that he will set a goal of 125,000 more jobs by 2020 and mentioned a few of the initiatives he will pursue to help create jobs across the state:

“Sometimes, in the middle of a political campaign, we forget the whole purpose of running for office and serving in government: It’s to help people have better lives. That’s the purpose.  It’s not to get elected. It’s to make life better,” Webber said. “The job of the governor of New Mexico is to be the state’s Chief Executive Officer—because New Mexico is like any large organization. We need a leader who understands that being governor is a privilege and a responsibility, a chance to serve others.”

Webber graduated from Amherst College, and later received an honorary doctorate from Boston Architectural College. He was an administrative assistant to the Mayor of Portland, Oregon in the 1970’s. His work and personal lives came together when, on his first date with Frances, they went door-to-door campaigning for city-county consolidation. They’ve been married for 37 years and have two children, Adam and Amanda.

After Portland, Webber served as Special Assistant to the US Secretary of Transportation. Later, in Boston, he worked for Gov. Michael Dukakis’ administration and became the managing editor/editorial director of the Harvard Business Review. Following a 3-month fellowship in Japan, he saw how the world was changing. Global competition, digital technology, demographic changes, and generational shifts were remaking business and careers. With his friend and colleague Bill Taylor, he set out to launch a new magazine that would be the handbook of this new world of work, asking and answering: How can individuals make a difference? How can companies both do well and do good?

Fast Company became the fastest growing business magazine in American history, he said. Ultimately, the investors behind Fast Company sold the magazine—enabling Webber and his wife to move to New Mexico to live the rest of their lives. He has since written three books, given speeches on early childhood education, and worked with small businesses, social enterprises, and non-profits to help them grow. He said that his commitment is to contribute to New Mexico and to leave this state in better shape, with more opportunities for more people, than when he moved here.