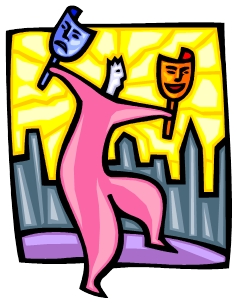 The auditions tale place in the Green Room of the Performing Arts Center, 1670 Nectar St.

Scripts are available at the Reference Desk of the Mesa Public Library.

Anyone who wishes to have a private audition rather than attend the group audition should contact John Gustafson at johngus@cybermesa.com or 505-412-3235.

“VanChocStraw”, an unpublished play by Albuquerque-based playwright Mark Dunn, will be produced at LALT in March 2013, and will be LALT’s entry into the AACTFest competition to be hosted at LALT also in March.

Mimi Adams is the director and John Gustafson the producer. Anyone interested in helping with crew for this show is also invited to let us know.

It contains 5,000 pieces and she has less than a day to finish it, because poor health is forcing her to leave her long-time home and move in with her younger sister … without her puzzles.

A young couple looking to buy a home gets caught up in the attempt to finish the puzzle.

A bittersweet comedy about tenuous family ties and the often stronger bonds of friendship that lattice the final years of our lives.