Griggs: Headlamps In The Rain Forest 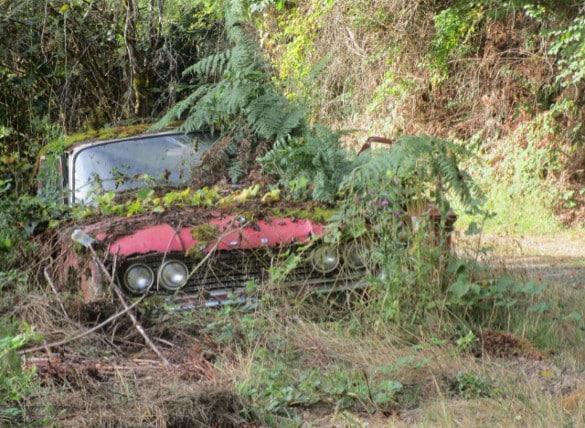 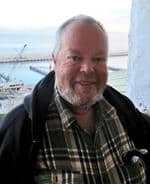 By David H. Griggs
Los Alamos Daily Post
The pickup truck maneuvers slowly along the winding, rain slicked road. Towering Douglas-fir trees rise on the bordering hillsides. Across a narrow stream, headlamps peer through the tangled undergrowth covering the old car. Welcome to the Temperate Rain Forest in the Oregon Coast Range.
Most of us have heard of tropical rain forests. Images of humid jungles, howler monkeys, and lost civilizations spring to mind. But there are temperate rain forests, too. The largest temperate rain forest in the world is located here in North America, on a narrow band of land stretching along the Pacific Coast from Northern California to Kodiak Island in Alaska.
Plate tectonics in action: The Pacific and Juan de Fuca Plates smash under the North American Plate, raising mountains and volcanoes in the process, part of the Ring of Fire. Moisture-laden air blows in from the Pacific Ocean, ameliorating the temperature and dropping copious quantities of rain where forced to rise by the mountains.
A mild maritime climate prevails throughout the range with temperature and precipitation varying due to elevation and distance from the coastline. Characteristics of the climate include cool dry summers followed by mild and wet winters. Mean annual temperature of range between 39° and 54 °F.
About half of the precipitation is deposited in the winter (December- February), a quarter in the spring, and a quarter in the fall. There is very little rainfall in the summer. However, high relative humidity, especially in the early morning hours, produces great banks of fog that contribute valuable moisture.
Most of the Oregon Coast Range is forested with the overstory of the forest dominated by red alder, western hemlock, western redcedar, Sitka spruce, bigleaf maple, and Douglas-fir trees. All of these thrive in the moist conditions of the Temperate Rain Forest. The moist conditions also support an understory of mosses, ferns and shrubs.
Douglas-fir is perhaps the most common tree in Oregon because of its economic significance and is the tree seedling most commonly planted in commercial reforestation projects. Its strong, relatively dense wood is used to produce timber beams, boards, plywood veneer, and wood fiber for paper manufacture. Also, its soft, fragrant needles have made it one of the most popular Christmas trees in the nation.
I regret to note that I did not catch any glimpse of Sasquatch dodging among the pines.
An enchanting sight in the Coast Range is the long drapes of Witch’s Hair (Alectoria sarmentosa) hanging from the branches of the old Douglas-firs and Sitka spruce. This strand in this photo is dangling from the branch of an apple tree in the front yard in Logsden, Oregon.
Witch’s Hair is a lichen, a symbiotic association of a fungus and a green alga. Lichens are some of the plants that play a critical role in the nitrogen cycle through their ability to fix nitrogen directly from the atmosphere. Nitrogen fixation provides an essential nutrient for living things, including serving as part of nucleic acids and amino acids.
Plants that fix nitrogen take the inert form in the atmosphere and convert it to a form that can be used in nitrogen compounds useful for other chemical processes. When lichen falls to the ground, it fertilizes the forest floor with nitrogen. In a forest, the lichen can add 4-8 pounds of nitrogen per acre every year.
Witch’s Hair resembles but is not related to Spanish-moss, which is an epiphyte. 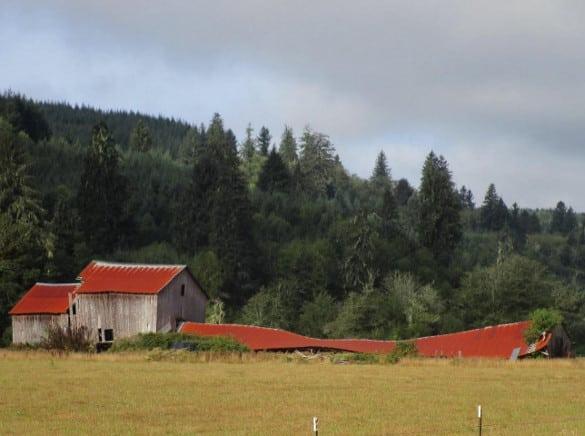 The barn slowly sinks into the earth, its demise accelerated by neglect and the insidious action of the moisture-filled air. Second-growth trees of the Temperate Rain Forest tower in the background. Photo by David Griggs 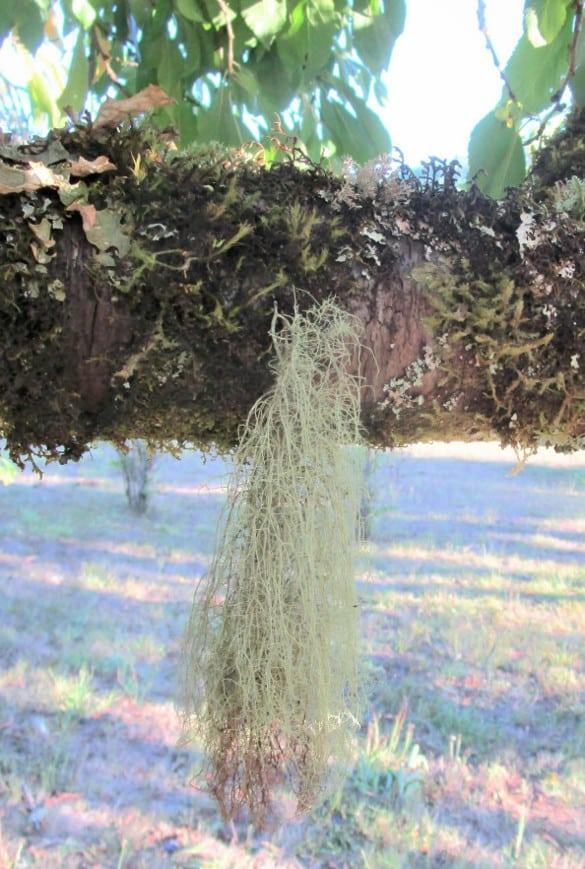