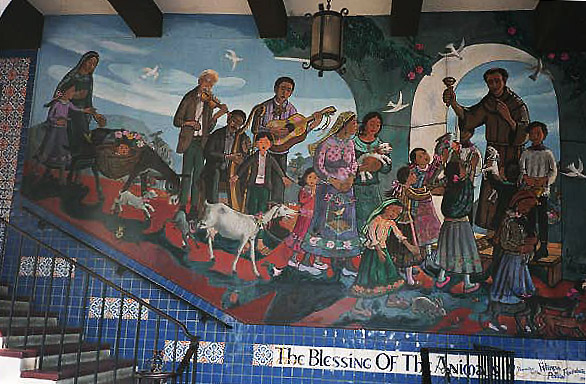 ‘The Blessing of the Animals’ by Leo Politi, near the top of historic Olvera Street in Los Angeles. Photo by David Griggs 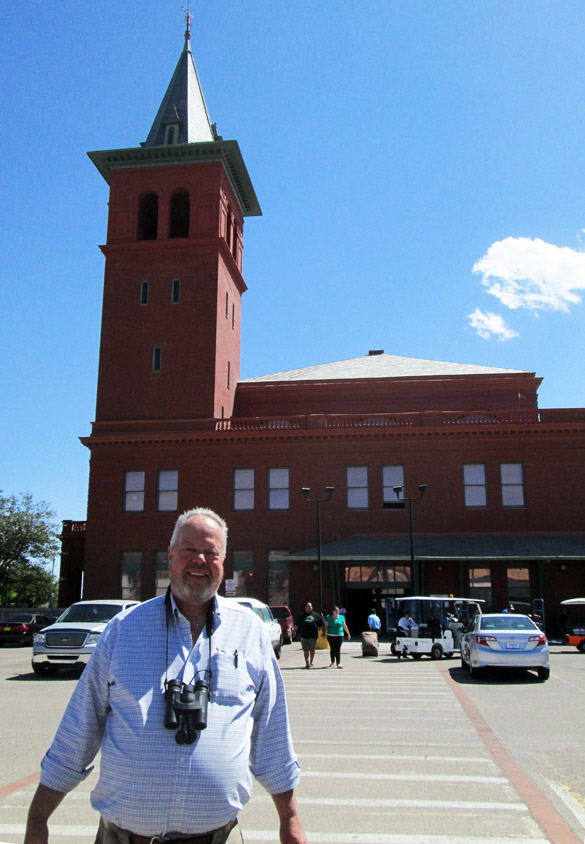 Author David H. Griggs at the El Paso Train Station, during a break on the Sunset Limited run from Los Angeles to New Orleans. Courtesy photo

From The Redwoods To The Bayou

What a great omen and start for a journey! As the bus cruised south out of Arcata, I caught the ending of a full lunar eclipse in the western sky over the waters of Humboldt Bay.

After the winter in Central America, I spent a wonderful month with my son Tobias in northern California. Birds were on the move, too, and I added 23 species to my personal bird list during walks at the neighboring Arcata Marsh. To name a few: Aleutian “Cackling” Geese, Caspian Terns, Anna’s Hummingbirds, Horned Grebes, Buffleheads and Audubon’s Warblers.

A series of bus/train (the San Joaquin)/bus runs on Saturday transported me the length of California. Starting among the towering redwoods of the north, I rolled through rolling hills of vineyards, past miles of flat farmland in the Central Valley that raises (as long as the water lasts) so much of America’s produce, and finally arrived in the huge southern metropolis of Los Angeles. The schedule called for almost a 24 layover, so I checked the Metro Plaza Hotel, which was walking distance from the station.

Knowing that I was going to be in Los Angeles for Easter, I had checked on the Internet for the closest Episcopal Church to Union Station. On Sunday, I attended the Easter Eucharist at the Church of the Epiphany (Iglesia de la Epifania) in the nearby Lincoln Heights neighborhood. Located in a largely Hispanic neighborhood, the service was bilingual (English and Spanish) and served an Easter dinner afterward. The church continues to have an advocacy voice in the community. Back in the day, Cesar Chavez spoke there, and La Raza, a bilingual newspaper that gave a voice to the Chicano movement, was published in the church basement.

After the service, I spent an enjoyable, leisurely afternoon walking back to the hotel. Spotting an open barbershop on Broadway, I stopped for a haircut and then I wandered through Chinatown. Finally, I visited historic Olvera Street. At the top of Olvera I stopped to gaze once again at the famous mural “The Blessing of the Animals” by Leo Politi. He was the author and illustrator of one of my favorite books as a child: The Song of the Swallows. By the time I got to the bottom of Olvera, I was ready for a break, so I stopped at Las Anitas Restaurant and relaxed with guacamole, chips, salsa, and a delicious cup of coffee with piloncillo and cinnamon.

All too soon the day came to an end. I returned to the majestic Union Station, framed by towering palm trees. At eight in the evening I boarded the Sunset Limited and the train headed east into the gathering darkness of Southern California.

Nighttime is dark in the sparsely populated Southwest, but during the day the train provides an excellent platform for soaking up the rugged landscape. Ocotillo was in spring bloom, with scarlet flowers flying like flags from the tops of the tall, scraggly stems. Cacti flourished, including cholla, prickley pear, and barrel cactus. Vistas were spectacular, with vast open spaces, arroyos, mesas, and buttes, and mountains in the distance. Rolling into Texas, we encountered blue bonnets, orange Indian paint brushes, tumbling tumbleweeds, and breaks along watercourses. By the time we got to San Antonio, trees were much more abundant. I saw a sign on a parallel highway: “Stop – Turn about and don’t drown.” We kept going.

By the time we reached Houston, the terrain reflected an even wetter climate, and we could glimpse ocean going vessels in the shipping channels. Louisiana brought bayous as we glided east in the night once again. Finally the journey of two nights and days was almost over. We soared up and across the Huey P. Long Bridge over the Mississippi River, and the lights of New Orleans spread before us.

As we traveled, the conductors would announce, “The next stop will be only for passengers getting off the train at this station.” This was shorthand for “NOT a Smoking Break”. For the longer stops, the announcement is made that smokers could step onto the platform for a few minutes. Well, old habits die hard. So, even in the middle of the night, I might find myself strolling on the platform in places like Maricopa, Ariz., and enjoying the fresh air. Fortunately, thanks to my Santa Fe acupuncturist Anne Richardson, I have not had a cigarette in eight years.

I traveled coach this time. It is not as comfortable as a sleeper, but the whole trip from Arcata to New Orleans only cost $237. Food and the hotel in LA were extra, but when you include the scenery, geography, history, and conviviality, the price is still good. There is a snack bar for light stuff, but the Dining Car featured good service and food. The attendant seats passengers four to a booth, which usually results in interesting conversations at each meal.

The trip evoked many memories: