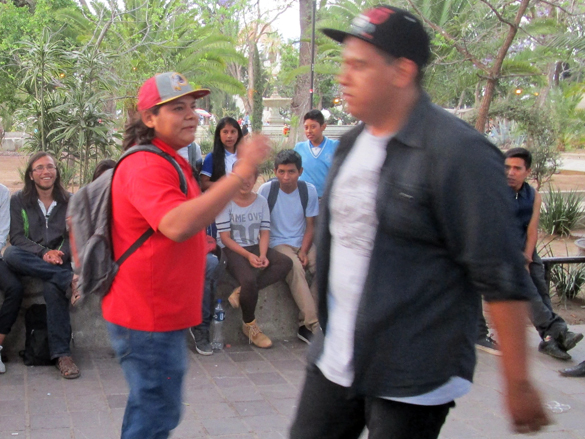 Two rappers gesticulating and insulting each other to music in El Llano Park. After a particularly good zinger, the crowd would laugh and applaud. After each round, the crowd would vote for their favorite rapper. Photo by David Griggs 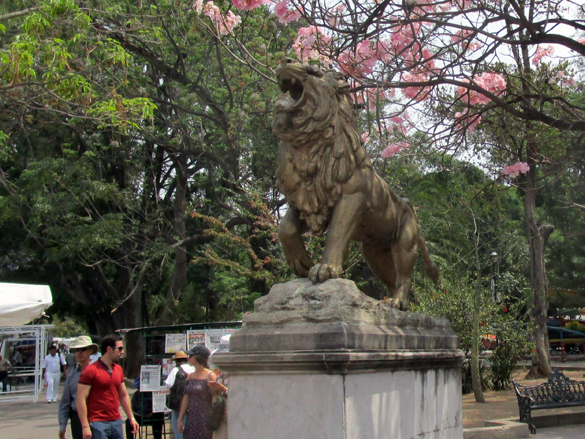 A roaring lion at the entrance to Parque Juarez (El Llano) in Oaxaca, Mexico. Photo by David Griggs

Three days in Oaxaca was not enough, so this year I stretched my visit to two weeks. Hostel Don Nino at 804 Pino Suarez was once again my base of operations. A bunk in a dorm cost about $10, and included a hot breakfast.

Located in the historic center of the city, the hostel is walking distance to the main attractions: the Zocalo, museums, historic churches, the Ethnobotanical Garden, the large public markets, as well as delicious restaurants and coffee shops.

With more time, I explored the city in a leisurely fashion. This started with the park directly across the street from my hostel.

Parque Juárez is known locally as “El Llano”. One block wide and three blocks long, El Llano provides a relaxing tree-shaded living room in the middle of the city.

From early morning to late in the evening, it seemed there was always activity in the park: single people and families, humans walking dogs, kids on skateboards and roller skates, walkers, joggers, bicyclists, lovers embracing on benches, children bouncing on an inflated Sponge Bob contraption, old folks in wheelchairs, babies in strollers, students going to and from school, church bells in the distance, wires connecting ears to electronic devices, a class of black T-shirted teens practicing flying power kicks, and vendors selling ice cream, ices, tacos, coffee, and flavored ices.

In the late afternoon and evening, a man pushes a curious three-wheeled metal cart through the park, occasionally pausing to turn a valve on a device that produces a weird noise that sounds like a factory whistle. The cart has a wood-fired stove and chimney, and the man sells cooked bananas. Upon receiving an order, he takes the bananas from the oven, arranges them on a Styrofoam plate, and then drizzles sweetened condensed milk on top to create a delicious treat.

At other times, El Llano is transformed into an outdoor carnival, with the addition of rides and games for kids, as well as inflatable play areas and battery-operated cars for kids to drive.

There are usually food and drink options for sale in the park, but these offerings expand greatly on Fridays and during carnival events: tantalizing tacos, sandwiches, pizza, grilled elote (corn-on-the-cob), crepes, and ice cream. Drinks included fresh-squeezed juices, hot chocolate, coffee, water, and sodas, as well as beer and mezcal.

One of my favorite foods at the park is a tlayuda. A tlayuda starts with a very large, thin, crispy corn tortilla that is cooked in front of you on a flat or concave metal comal or griddle.  The tortilla is covered with refried beans and other toppings, including shredded   cabbage, avocado, strips of meat, Oaxaca string cheese, and salsa. Tlayudas are generally served open-faced, but at times are served folded in half.

Only a couple of blocks down Pino Suarez from my hostel is the Oaxaca Lending Library, which has books, movies, and magazines in English for ex-pats as well as a comfortable place to read and relax. The staff, volunteers, and bulletin boards provided helpful information on what was going on in the city. There is a small café that sells coffee, drinks, and bagels in the morning. I had an enjoyable two afternoons playing bridge there.

One of my goals on this trip was to learn more about mole. I am talking here not about that blind rodent that makes tunnels in your lawn. Neither do I refer to the spy who burrows into the security defenses of a country. I am referring to that great Mexican culinary specialty that Oaxaca claims as its own.

Mole is the generic name for many sauces originally used in Mexican cuisine, as well as for dishes based on these sauces. Outside Mexico, it often refers specifically to mole poblano, a dark sauce with chocolate. In contemporary Mexico, the term is used for ranging in color from yellow and orange through green, brown, red and black, with a wide range of ingredients, flavors, and textures. Generally, a mole sauce contains a fruit, chili pepper, nut and spices like black pepper, cinnamon and cumin.

Toward that end, I did some serious investigation during several dinners at La Olla, a delightful restaurant a few blocks away on Calle Reforma. I also explored the many dried peppers, spices, and mole powders in stands at the sprawling Benito Juarez Market. More research will require future trips to Oaxaca.

If you go to this market, keep an eye open for a lady with a small basket selling chapulines (small fried grasshoppers). She will have them in two versions: with chile or with garlic and lime. Feeling adventurous? Try this new culinary treat.