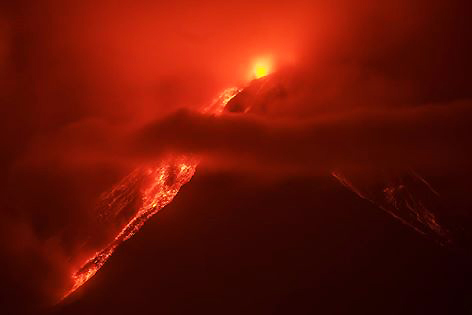 The above dramatic nighttime photo captures the eruption of Fuego Volcano at the end of last week. About 30 miles from where I have been spending the winter on Lake Atitlán, Fuego is one of three large stratovolcanoes overlooking Guatemala’s former capital, Antigua.

I rode past Fuego Volcano last Wednesday, on a trip to the beach at Monterrico on the Pacific Ocean. At that point, Fuego was belching white smoke with occasional black puffs. By the weekend, this had changed to strombolian activity, intense lava fountaining, and  tall ash plumes. CONRED, our national civil defense agency here in Guatemala, raised the alert level to Orange. La Aurora, the international airport in Guatemala City, was closed because of volcanic ash.

By mid-week, volcanic activity has quieted down. The airport is open again, and the news has moved on to other topics.

I shared this photo by de Ivan Ramanish Castro Peña on Facebook earlier, and because of the interest expressed, I am sharing it with my wider distribution.

A dear friend expressed concern that I might be in danger from this volcano. This gave me pause, and I looked back over my life.

I have lived through hurricanes in New Orleans, floods by the Mississippi River, blizzards in New England, landslides in Colorado. In the Midwest, signs in buildings indicated both escape routes in case of fire, and also where do go in case of tornados. On the West Coast, the signs warn of tsunamis. Earthquakes woke me up in the middle of the night in Arcata, Calif. The natural world threatened with mosquitoes, scorpions, black widow spiders, bears, skunks, snakes, and poison ivy. As a kid in upstate New York, I learned how to hide under my desk if we were attacked by atomic bombs. When I lived in New Mexico, I was chased out of town by a wildfire. And did I mention plutonium?

And through it all, life goes on. So what’s a volcano among friends?

To nudge you before you get too ensconced in your rocking chair, I highly recommend a book by Linda DeBlanco, a friend and neighbor on Lake Atitlán. GET PACKING: If Not Now, When? is available in print and Kindle formats from Amazon. She encourages those who suffer from a touch of wanderlust to seize their window of opportunity upon retirement and sail away into adventure.

Editor’s Note: Since retiring from Los Alamos County in September 2013, David Griggs has been traveling the world. He intends to submit future columns of his travels to the Los Alamos Daily Post for publication.