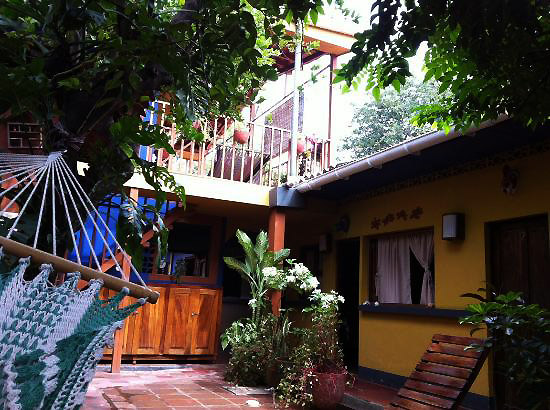 Poetry In The Heart Of León, Nicaragua

As a snowbird fleeing the ravages of the northern winter, I continued south. My next stop in Central America was the comfortable and copacetic colonial city of León in Nicaragua, and I was definitely into “shorts and T-shirt country”.

The hostel La Tortuga Booluda provided a great base for my five day stay in León. The staff was very friendly and helpful, giving directions and suggestions, serving drinks and arranging a shuttle. I had the bottom of a bunk bed just off the kitchen, and the fan was sufficient to make the room comfortable for sleeping.

The shower had only cold water, but the temperature was so warm that it felt good. I enjoyed a hammock in the courtyard, and spent pleasant hours gazing at the sky and the sardinillo tree with colorful yellow flowers. The price was about twelve dollars a night, which included wifi, coffee, and a pancake breakfast.

A new travel tool which I have found to be helpful is the on-line TripAdvisor website. If you read at least several of the comments on a location, you can get a sense of the experiences of other travelers.

Such was the case with my discovery of El Bodegon, a tiny Cuban restaurant tucked in next to a brightly lit pizzeria. The owner welcomed me inside, and showed me the menu on the wall. When I hesitated over the choices, he picked out for me a plate of chicken tostadas that was light and delicious. This was accompanied by a wonderful pineapple daiquiri. To top the meal off, I had a dish of rich chocolate ice cream with bananas.

León is very proud of its native son, poet, writer, and sometime diplomat Rubén Darío (1867 to 1916). There is a Rubén Darío street and a Rubén Darío museum, and his face appears on statues, paintings, postage stamps and lottery tickets.

On the way back to my hostel from dinner, I stopped in Rubén Darío Park and enjoyed a free outdoor program of oral poetry. Streets were closed near the park, folding chairs were provided for the public, and about 20 people – kids through adults, male and female – declaimed poetry, both their own and that of Darío. On a nearby wall was painted Sin Poesia No Hay Ciudad (Without Poetry There Is No City).

On the Parque Central (Central Plaza) is the historic Cathedral, the largest in Central America. Inside is the tomb of Rubén Darío, attended by the statue of a weeping lion. 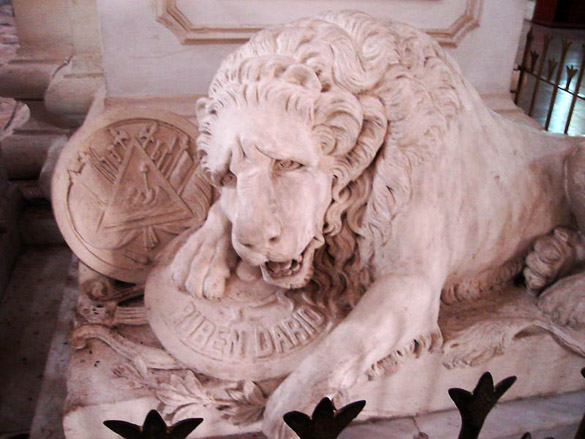 Also on the plaza is the Museum of the Revolution. Our English speaking and very enjoyable guide was Francisco, a self-proclaimed FSLN veteran. He was very knowledgeable about the history leading up to and including the revolution. He even took us upstairs and out onto the corrugated sheet metal roof, where he proceeded to show us the panoramic view of the volcanoes that surround the city.

León is the self-proclaimed First Capital of the Revolution. The first President Somoza was assassinated here in 1956. The city is home to the National University, and students were very active in the revolution to overthrow the Somoza government in the 1970’s.

Other memories of the revolution include statues of martyrs, murals, a prison, and physical scars of battles between the Sandinista and Somoza forces.

If you like art, Centro de Arte Fundación Ortiz-Guardián is a jewel you do not want to miss in León. This very well maintained gallery is spread through a couple of beautifully renovated colonial houses, and has several wonderful courtyards and some interesting designs in the ceilings, as well as frequent places to sit down and rest tired feet.

For me the highlight of the tour was the extensive collection of young Central American artists in a variety of media who are still alive. Names here include Norman Morales and Manuel Chavajay of Guatemala, Danny Zayaleta and Simon Vega of El Salvador, Raul Quintanilla and Lis Morales Alonso of Nicaragua, and Nahum Flores of Honduras.

One room is dedicated to the work of Nicaraguan artist Armando Morales. Another is entitled El Libro Ilustrado (the Illustrated Book), and includes signed engravings by Picasso, Chagal, Miro, Georges Braque, and more.

From León, I traveled Managua, the capital, to attend a regional Rotary Project Fair. This convention highlighted projects run by various Rotary groups in Nicaragua and the region, many with the support of Rotarians in the United States and Canada. Many projects dealt with issues such as clean water, sanitation, health care, and education. Members of Rotary International are doing wonderful things around the world.