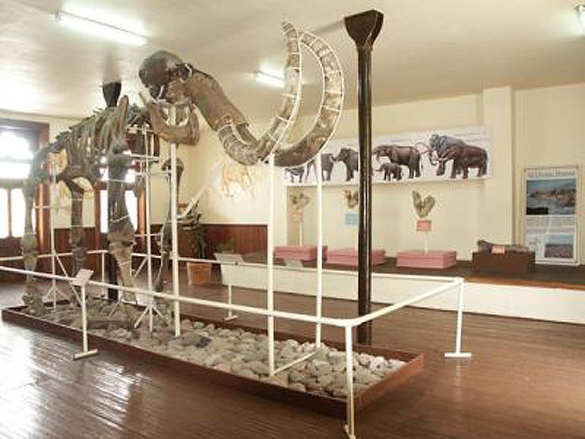 On arriving in Chihuahua, I discovered with great joy that the city hosted “El Museo de Mamut” – the Museum of the Mammoth. I did not realize that mammoths had lived as far south as Mexico.

Since childhood I have been fascinated with those big wooly mammoths, the iconic animals of the Pleistocene Ice Age. Years ago, I visited the Denver Museum of Nature and Science in Colorado: I have a vivid memory of walking through a small door and being startled by a face-to-face encounter with the towering skeleton of a mammoth.
This summer I traveled to Canada to catch the exhibit Mammoths! Giants of the Ice Age at the Royal British Columbia Museum in Victoria. The star attraction of the show was Lyuba, a 40,000-year-old baby wooly mammoth on loan from a Russian museum. The best-preserved specimen in existence, Lyuba was only a month old when she was trapped by a collapsing riverbank.
A highlight in the museum is a full mammoth skeleton with dramatic upcurved tusks. There is an informative exhibit on mammoths and mastodons, and a room dedicated to the Graveyard of the Mammoths, located near Ojinga in the state of Chihuahua. As with the tragedy faced by Baby Lubya, many bones and skeletons attest to sinkholes and collapsing riverbanks that trapped numerous mammoths.
The museum includes the full skeleton of a Gray Whale and informative displays on such topics as the Cambrian explosion of life, dinosaurs, ammonites, trilobites, Mexican amber and copal, and the bombardment of Earth by meteors, comets, and meteorites.
In the first-floor courtyard and scattered throughout the building are odd collections of miscellaneous old equipment:  antique soda machines and electric fans, a rusted pickup truck, old mining equipment, a portable forge, gasoline pumps, a sharpening wheel, and huge thousand-gallon wooden wine barrels (unfortunately empty). 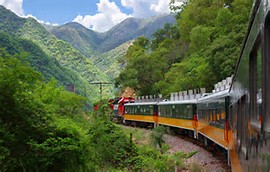 ‘El Chepe’ – The Copper Canyon Railway
I departed from Chihuahua in grand style. With clouds scudding in front of the moon in the pre-dawn darkness, the taxi drove past the high-walled Penitentiary. The driver pointed out the bullet-hole scars on the towers, done, he said, by Pancho Villa.
Then suddenly, we arrived at the train station, which was already alive with travelers and light and conversation. The Copper Canyon Railroad was about to depart on its 6 a.m., thrice-weekly run between Chihuahua and Los Mochis. The train is nick-named “El Chepe” after the name of the rail company, Ferrocarril Chihuahua-Pacifico.
From Chihuahua, the route rises to 7,900 feet above sea level at the continental divide, and then begins the spectacular descent through the mountains and rugged canyons. The trip features 408 miles of railroad tracks, 86 tunnels and 37 bridges.
At the small town of Divisadero, the train pauses for a 20-minute break. Passengers can purchase burritos and stuffed quesadillas from the women who set up charcoal grills on the train platform. A short stroll is rewarded by views of the dramatic scenery that resembles the Grand Canyon. Next time I make this trip, I would like to stop for a day or two in Divisadero or one of the nearby towns and explore more of Copper Canyon.
Fourteen hours later I disembarked at Los Mochis, a small city on the hot Pacific coastal plain. From there, the journey would include several bus rides, first to Mexico City and then to Guatemala. The final leg would be a boat ride across Lake Atitlán to my winter quarters in Panajachel.
Menu
Los Alamos
52°
Cloudy
7:22am6:15pm MDT
Feels like: 48°F
Wind: 9mph SSE
Humidity: 45%
Pressure: 29.84"Hg
UV index: 0
WedThuFri
54/34°F
61/39°F
63/41°F
Weather forecast Los Alamos, New Mexico ▸