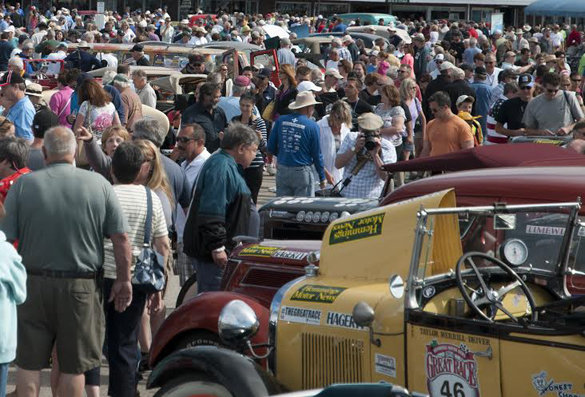 Great Race. Courtesy photo
GRS News:
Santa Fe will host an evening stop for the 2015 Hemmings Motor News Great Race presented by Hagerty at 4:45 p.m., Tuesday, June 23.
The Great Race, the world’s premiere old car rally, will bring 120 of the world’s finest antique automobiles to The Plaza in downtown Santa Fe.
The cars and trucks will begin arriving in Santa Fe shortly after the 4:45 p.m. start time of the festivities. The evening stop festivities will last approximately two hours.
The Great Race kick off is free to the public and spectators will be able to visit with the participants and to look at the cars as they stop for lunch. It is common for kids to climb in the cars for a first-hand look. Live announcements by “MotorMouth”, the traveling Great Race announcer will inform the spectators about each and every car on the race. Spectators can also get souvenir program books that lists all of the cars and racers.
In last year’s Great Race, which traveled from Maine to Florida, a 1915 Hudson racer, a 1916 Hudson Hillclimber and a 1917 Peerless were the three oldest vehicles. All of those vehicles are participating again in 2015. Other vehicles include Ford Model A speedsters, British and Japanese sports cars, classic Corvettes, and much more.
Along the 2,400-mile route, competitors will travel parts of The Mother Road in all eight states it originally ran through―Illinois, Missouri, Kansas, Oklahoma, Texas, New Mexico, Arizona and California.
The race will finish June 28 at the Santa Monica Pier in California, traveling along historic Route 66.
Hosted lunch and overnight stops along the route are a great way for locals to see the cars up close and personal. “When the Great Race pulls into a city it becomes an instant festival,” race director Jeff Stumb said. “Last year we had three overnight stops with more than 10,000 spectators on our way to having 250,000 people see the Great Race during the event.”
About Great Race
The Great Race is the world’s premier vintage car rally, and it sends collector vehicles on a journey that the drivers and navigators will never forget. Founded in 1983, the Great Race has logged millions of miles throughout North America, visiting hundreds of cities, towns and villages along the way.
The competition is fierce, with a $150,000 purse on the line, but the racers are a tight knit group that loves to spend time behind the wheel of a vintage car.
For more information, please visit http://www.greatrace.com
Menu
Los Alamos
39°
Showers in the Vicinity
6:39am5:56pm MST
Feels like: 34°F
Wind: 10mph S
Humidity: 41%
Pressure: 30"Hg
UV index: 1
FriSatSun
46/30°F
46/27°F
43/27°F
Weather forecast Los Alamos, New Mexico ▸