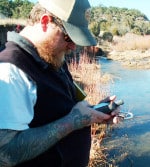 Highlands geology graduate student Ryan Mann uses GPS to mark the location where he collected water samples and streamflow measurements on the Jemez River for a geomorphology class at the university. Courtesy photo
NMHU News:
LAS VEGAS, NM ― A New Mexico Highlands geology graduate student will conduct a hydrogeology research study of the lower Santa Fe River that aims to measure the quantity and quality of the water as it flows into the Rio Grande.
Ryan Mann, a 41-year-old Albuquerque native and Santa Fe resident, received a grant from the New Mexico Water Resources Research Institute to fund his study.
“The purpose of this study it to better define the hydrologic budget, the inflows and outflows of water, as well as the water chemistry,” Mann said. “In the La Cienga area of the lower Santa Fe River there’s been a shift in land use from agriculture toward more housing developments that rely entirely upon domestic wells. I’ll be looking at how this new land use is affecting the amount of river water and its quality.”
Mann said the study will help stakeholders in the La Cienga community such as farmers, ranchers and homeowners better balance the demands on water in the lower Santa Fe River.
Mann will be collecting water samples at multiple monitoring sites during the summer and winter seasons to test the general chemistry of the water.
“The chemistry will give an indication of overall water quality. We’ll also be measuring streamflow, which tells us how much water is flowing through the river. These measurements will be done on a weekly basis for a year,” Mann said.
He said the hydrogeology project will become his thesis. Highlands geology professor Jennifer Lindline is his research adviser and thesis committee chair.
“I approached Dr. Lindline inquiring how I could conduct a hydrogeology study that would benefit society and she suggested this topic. The Santa Fe Water Division has needed a study like this for a number of years. I’m honored that I get to complete a project that will have an impact,” Mann said.
Lindline said that water resources issues facing New Mexico and the Southwest United States are profound.
“The Highlands Environmental Geology Program works to raise students’ awareness of surface and ground water resources and the depths of water supply issues,” Lindline said. “Ryan’s study is a good example of data collection and collaboration with community stakeholders, city offices, and state agencies to improve the collective hydrogeologic understanding of this important La Cienga area.”
Mann said that Lindline has been great to work with at both the graduate and undergraduate level.
“Dr. Lindline is extremely good at keeping students focused on the task at hand and giving the right amount of direction while allowing us to also be independent in academic endeavors. She’s very thorough and encouraging,” Mann said.
Mann said he wants to stay in New Mexico to pursue his professional career.
“I want to work with the State of New Mexico in the area of water resources management. My current research will give me a solid foundation for my aspirations. I’m grateful the New Mexico Water Resources Research Institute is making it possible.”
Menu
LOS ALAMOS