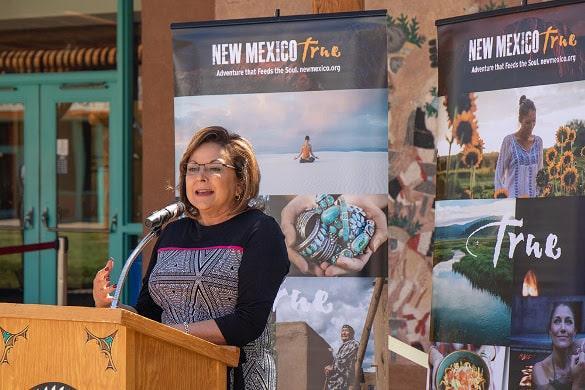 Gov. Susana Martinez announces New Mexico’s 2017 visitation numbers Wednesday in Albuquerque at the Indian Pueblo Cultural Center. Courtesy photo
STATE News:
ALBUQUERQUE ― Gov. Susana Martinez announced Wednesday that 35.4 million trips were taken in New Mexico in 2017 – breaking the record set in 2016 of 34.4 million by one million visits. This growth marks a rise of 5.6 million trips over 2010, a 19 percent increase since Martinez took office in 2011, and the sixth straight year New Mexico has shattered its record.
“When more people come to New Mexico it means they’re spending money and stimulating the economy in communities across the state,” Martinez said. “More and more people are discovering what we already know – New Mexico is the best place to visit. Our state’s culture, food and natural beauty is unmatched.”
Nearly 23 million of the 35.4 million trips taken in New Mexico last year originated outside of the state of New Mexico. This represents 65 percent of all trips, up from 55 percent in 2010. New Mexicans also traveled more in 2017, with the highest number of both overnight and day trips originating within the state since 2011.
For the second year in a row, New Mexico outpaced the U.S. average in a key area of travel, with 3.3 percent more overnight trips in 2017 than in 2016, compared to 2.1 percent respectively.
Road trips remain a top motivator for travel in New Mexico with 19 percent of survey respondents citing “touring” as the main purpose of their overnight trip, compared to the U.S. average of nine percent. The report also indicates a higher number of visits to New Mexico’s landmarks and historic sites, national and state parks, museums and art galleries than the U.S. norm.
“New Mexico True brings attention to what is ‘true’ about our state’s vibrant culture and heritage; the things that set us apart from every other state in the country,” Tourism Cabinet Secretary Rebecca Latham said. “Through the use of breathtaking imagery and stunning videography, along with road trip-themed campaigns like the Enchanted 8 and the Summer of the Mother Road, we’re able to showcase the experiences that consumers are hungry for.”
Since the introduction of New Mexico True as the state’s tourism marketing brand in 2012, economic impact and jobs sustained by visitor spending have also increased each year. New Mexico’s tourism industry continues to be a leader in job growth with an additional 1,700 leisure and hospitality positions added in 2017 – an increase of 19 percent and more than 17,000 jobs over the last seven years.
Menu
LOS ALAMOS