Government Shuts Down … Now What? 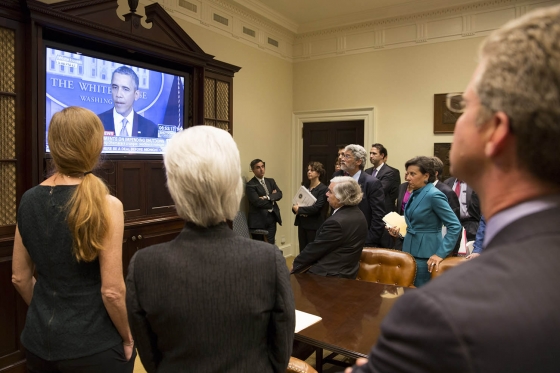 Members of the Cabinet watch as President Obama makes a televised statement earlier today in the Roosevelt Room of the White House about the looming government shutdown. Official White House Photo by David Lienemann

President Obama delivered remarks from the White House Press Briefing Room today about what the shutdown will mean for the country.

While some services will continue –- social security checks, postal service, operations related to national security or public safety –- a number of changes will go into effect immediately.

Office buildings will close. Paychecks will be delayed. Vital services that seniors and veterans, women and children, businesses and the economy depend on will be hamstrung. Business owners will see delays in raising capital, seeking infrastructure permits, and rebuilding after Hurricane Sandy. Veterans will find support centers unstaffed.

Tourists will find every one of America’s national parks and monuments, from Yosemite to the Smithsonian to the Statue of Liberty, immediately closed.

The shutdown has happened because the U.S. Congress deadlocked today over Republican efforts to halt Obama’s healthcare reforms. With the law funding thousands of routine government activities is set to expire at midnight, Republicans in the U.S. House of Representatives insisted that any temporary measure to fund the government include a delay of Obamacare.

Some 800,000 federal employees will be forced to take furloughs beginning Tuesday. Some functions deemed essential, such as U.S. Department of Agriculture meat inspections, will continue to operate but other agencies such as the Environmental Protection Agency will furlough most of their workers.

The shutdown will continue until Congress resolves its differences, which could be a matter of days, or weeks.

Los Alamos National Laboratory will continue operating during the shutdown and all employees are directed to report for work at their normal hours.