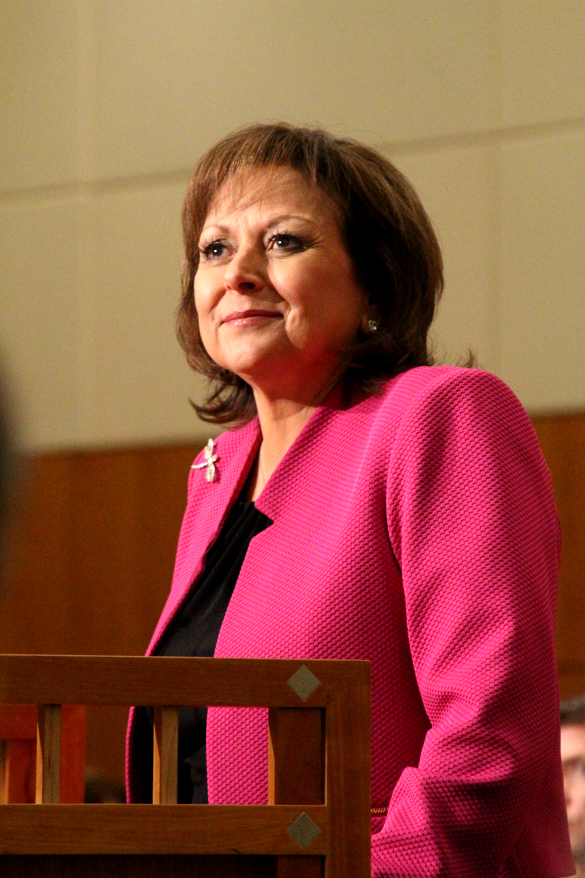 Gov. Susana Martinez delivers her State of the State Address at the opening of today’s 2017 60-Day Legislative Session. Photo by Bonnie J. Gordon/ladailypost.com

Starting the seventh year of her eight year term, New Mexico’s Republican Gov. Susana Martinez called for much the same medicine she has prescribed all along: lower taxes, fewer regulations, more schooling choices and accountability and better tools for the courts and law enforcement to fight drunk driving and crime.

“Let’s take another look at our tax system,” she said. “Close loopholes. Make it work better for New Mexicans. Get rid of regulations that get in the way of growth.”

Martinez has been challenged to explain the state’s perennially poor ranking in a number of categories and her mixed record in convincing the opposition party that tax breaks and budget cuts could put the state on the path to success. She probably had her best shot during the last two years, when she enjoyed a majority in the House of Representatives. But that was when the state, already slow in recovering from the Great Recession, was hit by a $131 million shortfall for 2015 plus more than twice that amount to balance the books for the current year. Resolving that crisis required a special legislative session and 5 percent across-the-board cuts, along with painfully scraping together cash transfer balances wherever they could be found in the state coffers.

Now, as Martinez makes her final turn, the Democrats have regained the lower house and held onto the Senate.

According to economic statistics compiled by the Pew Charitable Trust in November 2016, New Mexico was the worst state in the union in recovering lost jobs since the downturn, with an employment rate nearly 7 percent lower in FY 2016 than in 2007. The governor said today that she believes the slow job recovery can be attributed to the state’s heavy reliance on the federal government and the oil and gas industry.

When automatic across the board federal budget cuts, known as sequestration took effect along with other federal budget cuts in 2013, they “hit New Mexico harder than other states,” Martinez said today, “And now we face the deepest drop in oil and gas prices ever.”

Oil prices fell 71 percent, she noted, and “over 11,000 oil and gas jobs were lost,” Notably, oil and gas was the only energy subject the governor mentioned.

She said we have weathered the downturn better than other oil and gas states, because of her budget discipline.

“When we fall on hard times, government should not expect a taxpayer funded bailout,” she said.

Pointing to recent successes, she continued, “We’re seeing tens of thousands of new private sector jobs. Companies like Facebook and FedEx are choosing New Mexico, and our graduation rate is now at a record high.”

She recalled previous attempts to reduce government spending: “Five years ago I urged this body to act on its own recommendation to consolidate six executive agencies into three. These measures failed,” she said. “But I am urging you, take another look. We have nearly twice as many agencies as the federal government. What’s wrong with that picture?” That could save “tens of millions of dollars every year,” she said.

Using a rhetorical device that is often used during State of the Union addresses, the governor introduced several guests in her entourage who embodied issues that concerned her or represented the kind of successes she wanted to encourage.

One was a Rio Rancho student who benefitted from an expansion of Advanced Placement courses and interned at Sandia National Laboratories, now bound for college at Stanford University.

Another was a principal from a middle school in Farmington who brought his school up from a D to an A in just two years.

At one point, Martinez introduced a mother and father who had lost their 19-year-old son in an accident to a drunk driver. “It’s time to end DWI death, and it starts with tougher laws,” she said.

At the same time, she added, “The last few years, we’ve had the lowest DWI death rates in decades, but that’s not enough.”

Then, she thanked the mother and father “for fighting to make our state better, so that no family has to feel the pain that you do.” As she walked off the dais to embrace each of the parents, the audience gave Martinez the one standing ovation of her speech.

Among the proposals for cracking down on drunk drivers, she suggested giving “police officers the ability to conduct on-site blood tests,” and “if you knowingly lend your car to someone who had their license suspended for a DWI, you too should be prosecuted.”

The legislature will be getting sorted out as this week proceeds with 30 or so new legislators coming in, according to the guides at the information desk, some new members won’t be moving into their offices until later this week.