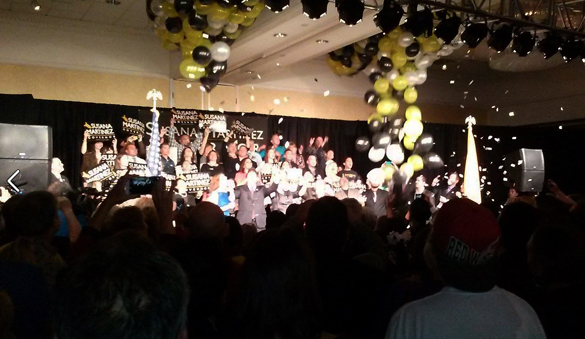 SANTA FE — It was November of 1952 — two years before a kid named Elvis Presley would cut his first record and a time when no major league baseball teams could be found west of St. Louis.

Before Tuesday night, 1952 marked the last time Republicans in New Mexico could celebrate on Election Night, knowing they had a majority in the state’s House of Representatives.

That 62-year losing streak came to an end.

By 3:11 a.m., it appeared that six seats in the House of Representatives flipped from one party to the other — with five of those seats switching from Democrat to Republican.

No state Senate races were up for grabs Tuesday, so Democrats still hold a 25-17 advantage in that chamber.

With the re-election of Republican Gov. Susana Martinez, that means New Mexico Republicans hold two of the three levers of power in the Roundhouse going into the upcoming 60-day legislative session in January.

“Finally we got things going our way,” said Andy Nuñez, one of the five Republican candidates who knocked off an incumbent Democrat. “It’s the people’s money and we have to takecare of it and go back to fiscal responsibility.”

“This looks terrible but this happened all over the country,” said state Rep. Luciano “Lucky” Varela, D-Santa Fe, who has served in the House for 27 years and is one of the most influential Democrats in the Roundhouse.

He now finds himself on the political outside looking in when it comes to all-important committee assignments. “The Republicans overwhelmed everyone else.”

REPUBLICAN WAVE: Andy Nuñez was one of a number of GOP candidates who knocked off incumbent Democrats in NM House races Tuesday.

“I thought we were gonna take ‘em,” said a groggy Nuñez in a quick phone interview just after 1:30 a.m. Wednesday morning. For the 78-year-old, his victory completed a political metamorphosis that saw him go from Democrat to an independent to Republican in the space of three years.

So what are the practical implications of a Republican-controlled House?

First of all, it means Speaker of the House W. Ken Martinez, D-Grants, is no longer the speaker.

Republican House members are scheduled to meet this weekend and will begin discussing leadership and committee assignments.

Among the names floated as potential candidates for Speaker of the House? Rep. Nate Gentry, R-Albuquerque, who has close ties to Martinez, and Rep. Don Tripp, R-Socorro. Other reps may throw their hats into the ring.

Eventually, the House Republican caucus is expected to choose a speaker and then hold a formal vote for speaker on Jan. 20, the first day of the 60-day session.

“The new speaker will have to appoint chairmans of the committees,” Varela said. “They’re going to be in total control. Where are we (Democrats) in this?”

In one sense, the change in the House doesn’t mean Republicans can do as they wish. After all, it would take defections of four to five Democrats in the Senate to send GOP-backed legislation on to the Republican governor to sign into law.

But it does mean pieces of legislation that Martinez and Republicans have seen thwarted in the House — such as holding back third-graders who cannot read at a minimal level or repealing the state’s law granting driver’s licenses to the undocumented — may sail through the House and put Senate members in potentially difficult spots.

“You have to watch what kind of governor we get with a Republican House,” Varela said. “We’re going to have to rely on the Senate to block those bills.”

Before Tuesday, there was talk of the GOP finally taking the House, but even one outgoing Republican told New Mexico Watchdog the chances of winning a majority was “20, 25 percent.”

But shortly before midnight, the votes moved into the “R” column, leaving those in the “D” column wondering what will happen next.

“This is horrible,” Varela said from his home in Santa Fe.

“I think it’s great,” said Nuñez before going to bed in his home in Hatch, knowing that in little more than two months he could once again chair a committee — only this time as a Republican instead of a Democrat.

“I’m going to end up being a member of the majority in both parties,” he said with a laugh.