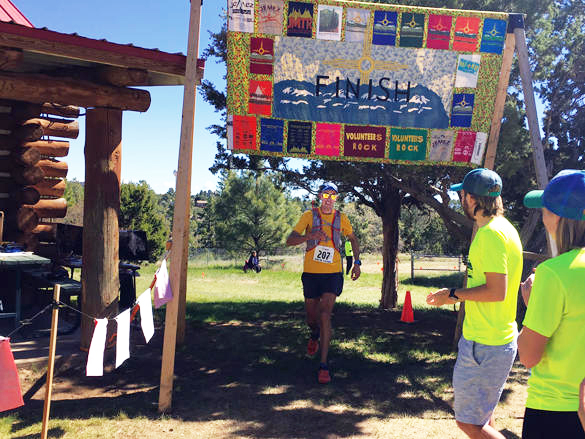 Dwight Rabe of Holloman AFB is the first runner of the day to cross the finish-line in Saturday’s Jemez Mountain Trail Runs. Photo by RJ Montaño/ladailypost.com​ 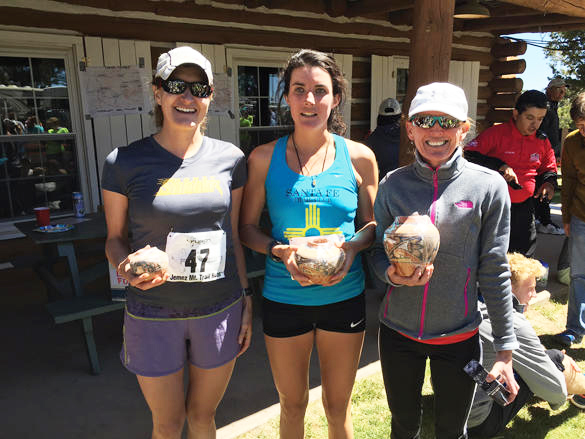 Top three female finishers of the 15-mile race, from left, Amber Dagel, Madeleine Carey and Kay Ulrich. Photo by RJ Montaño/ladailypost.com
By RJ Montaño
Los Alamos Daily Post
A Friday filled with cold weather, wind, and a morning snow storm lead to near perfect conditions for the 12th annual Jemez Mountain Trail Runs Saturday. The event drew 613 people to run in either the 15-mile, 50-Kilometer, or 50-mile grueling courses around Los Alamos and the Pajarito plateau.
A lot of planning and physical labor goes into hosting an event of such caliber.
“Planning starts in September, but ramps up in January to put on the Jemez Mountain Trail Run,” said race Co-Director Bill Geist, who is in his 10th year of helping with the race. “Luckily we have some really great volunteers who manage different areas like the aid stations, registration, communications, first aid so there’s lots of little areas with experienced volunteers managing.”
The day kicked off with 133 50-mile runners starting at 5 a.m. At 7 a.m. the 50K, roughly 31-mile, race started with 209 registered runners, the most in Jemez Mountain Trail Runs history.
The 15-mile race started at 8 a.m. with 288 registered runners.
U.S. Air Force Major Dwight Rabe, who is stationed at Holloman Air Force Base, won the 15-mile race with a time of 1:55:40. “Honestly, I was really happy with my race, it was the first time I’ve ever run up here and I had a good day and enjoyed the trails a lot,” Rabe said after the race.
Rabe was followed by Jason Schatz and Peter Vigneron of Santa Fe and a pack of Los Alamos High School Cross Country runners Kevin Parkinson, Phillip Martin and Shawn Williams.
A pair of 12-year-old middle school runners also ran and finished the 15-mile race, Pavel Trudolyubov and Daniel Chertkov of Los Alamos.
Local runner Logan Ott won the 50K race for a second year in a row, finishing with a time of 4:59:08. Ott was very proud of his sub-5 hour race. “That makes me super stoked. During the race, I didn’t feel like I was going that fast.”
When asked about how he trains for the race, Ott said, “I’m an opportunistic runner. I just enjoy running and get out when I can. I don’t have a plan, I knew I’d have to defend.” Coming in a close second was Isaac Burleigh of Soccoro and Holden Rennaker of Durango, Colo., rounded out the top three.
In the women’s 50K race, another local runner won it all. Erica Baron finished in a time of 5:38:26 to beat out Sabrina Stanley of Steamboat Springs, Colo.
The 50-mile race lasted into the night with the last runner crossing the finish line at 9:41 p.m. A trio of Colorado runners took home the top three spots.
Chris Price of Ouray, Colo., won the race in a time of 8:39:15.
On the women’s side, the top three runners put on an impressive performance with Amanda Morgenstern of Golden, Colo., taking first place over local runner Michaeline Nelson-Albright.
Full race results can be found at: http://www.highaltitudeathletics.org/results.htm 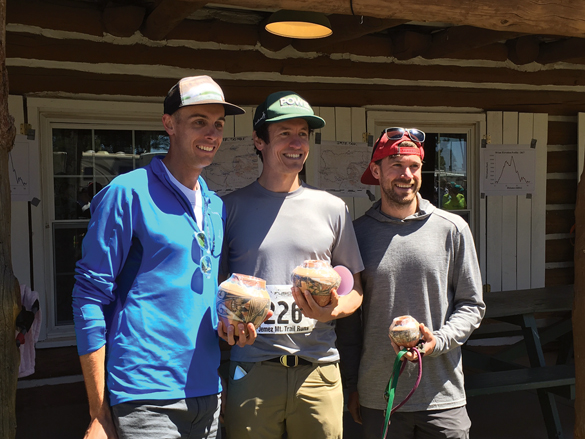 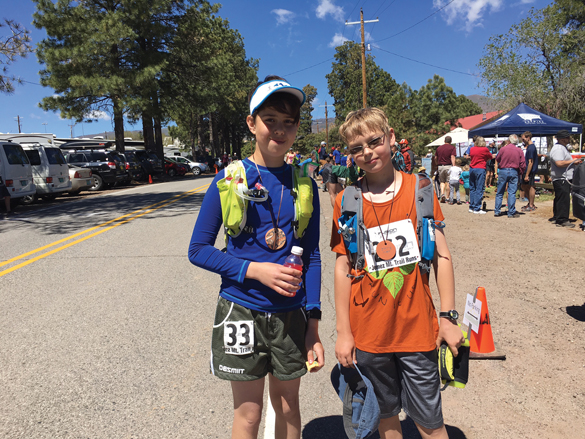