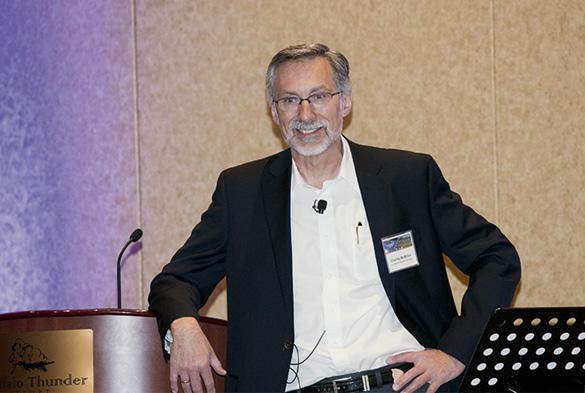 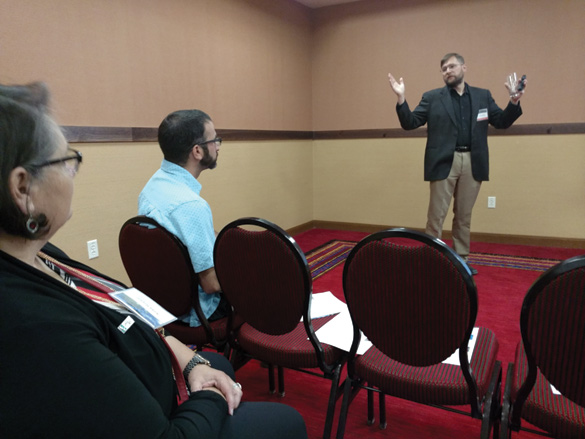 Jeff Pietryga, a specialist in nanocrystals, recounts the history of light as a scientific tool. Photo by Roger Snodgrass/ladailypost.com

During the following question and answers a student from Northern New Mexico College posed a particularly bold question on a topic that does not usually come up during these meeting, The student asked if the laboratory, which deals in weapons that are both offensive and defensive by nature, could be considered safe. “Is it a safe place to work in the next 12 months, with rising international tensions?” the student asked.

McMillan answered that the funding for LANL’s work comes from the Department of Energy rather than the Department of Defense. So, he suggested, the nuclear weapons were to be considered a deterrent, rather than offensive or defensive. He also considered LANL a safe place to work, but acknowledged the increasing geopolitical tensions that he said were obvious to anybody who reads the newspaper.

One of the sidebar sessions introducing the work of two scientists: Julianna Fessenden–Rahn, earth scientists, now a nuclear forensics project leader and Jeff Pietryga, a specialist in nanocrystals. Both are in mid-career with brilliant track records, and both are supported by the Laboratory Research and Development program. LDRD is a special fund that uses a small percentage of the lab’s overall budget to invest in advanced research selected in rigorous peer-review competition.

There was a particularly insightful moment of interaction as Pietryga introduced his project that involves a diverse, multinational team, developing a next generation magnifying tool for peering into one of the remaining “dark corners” of things that are extremely small, down to the movement of individual electrons.

The tool is called an x-ray free electron laser and is designed to produce “the shortest, brightest pulses of x-rays we’ve ever had,” Pietryga said. It would become one of the breakthrough instruments underpinning LANL’s signature research facility of the future. That facility, is known as MaRIE, for Matter-Radiation Interactions in Extremes.

Pietryga’s talk recounted the history of light as a scientific tool that has set the pace for human progress to see ever deeper and more precisely into the physical world by amplifying the light into smaller and smaller wave-lengths. “But it takes specialized light sources to answer some of the hardest and most essential questions in science,” he concluded. “Our team is going to make some of those specialized light sources possible.” 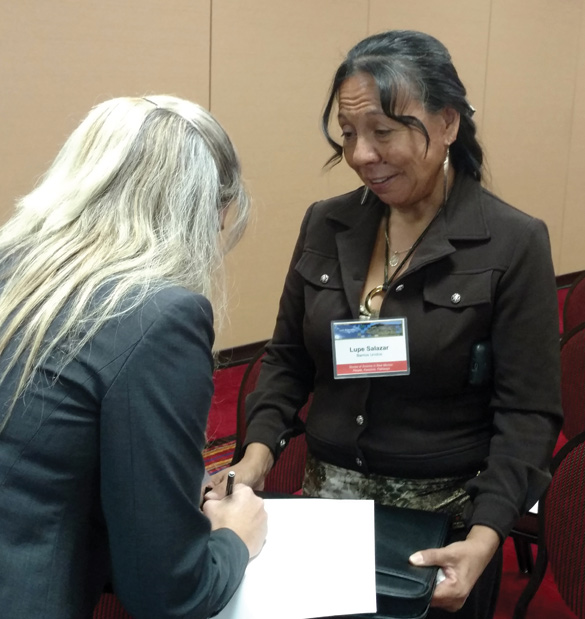 As he finished a woman in the audience had a question. “I am way out of my element,” she said, introducing herself as Lupe Salazar, president of Barrios Unidos in Chimayo. Later, she explained that Barrios Unidos is a new non-profit organization that started about a month ago, funded by the United Way, which is a recipient of contributions by LANL employees during the laboratory’s Giving Campaign. Barrios Unidos is dedicated to investigating the sources and solutions of drug addiction as a persistent trauma in Northern New Mexico. Salazar was asked to attend the LANL meeting by her sponsors at the United Way.

“I strongly feel that we can heal addiction,” said Salazar. “Now that you talk about these wave lengths, is there anyone or anything, or is it even possible to check the wave length of a human, to heal them with this type of light?” she asked. “I know that the highest vibration is love and I know I’m probably talking really very woo-woo.”
Somebody in the audience said gently, “You’re in the wrong room.”

“So,” said Pietryga, taking the question seriously. “I don’t think we’re ever going to improve on the natural source of love, which is people and especially people working in important positions like your organization.

“If you think science is ever going to improve on that I don’t believe that is the case. However, there are certain things that we can do to give you the tools that make your love more manifest in what you do. And that goes exactly to where these x-ray sources are best right now which is imaging those molecules and those proteins in the body and how they interact that is the source of physical addiction.

“This is a tractable problem if we get the right tools applied,” he said, “that’s going to tell you exactly the right course of action is for helping the people you see suffer so much. Yes, you’re in the right room.”

It was a tough question, well answered.