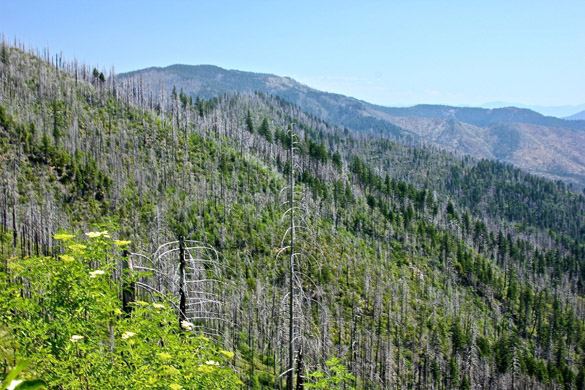 Natural fire mosaic, southwest Oregon, 10 years post-fire. Courtesy/Geos Institute
SCIENCE News:
ASHLAND, Ore. ― Twenty-five leading fire scientists from around the world released a new synthesis “The Ecological Importance of Mixed-Severity Fires: Nature’s Phoenix” published by Elsevier, a world-leading provider of scientific, technical and medical information products and services.
For the first time extensive documentation from around the world reveals that forests and other plant communities need a variety of different types of fires, including severe ones, to rejuvenate over the long-term.
These findings are timely as Members of Congress propose to weaken environmental laws based on the assumption that fires are damaging to forests, and logging is needed to reduce fire effects.
According to Dominick A. DellaSala, Chief Scientist of the Ashland-based Geos Institute and co-editor, “This is the first global synthesis of the countless ecosystem benefits of large and severe fires. Simply put, fire is to dry forests as rain is to rainforests, both are needed for vibrant forest ecosystems to remain that way.”
Chad Hanson, director and ecologist of John Muir Project, Earth Island Institute, and co-editor added: “The research compiled in this book provides strong evidence that when large fires burn through a forest they enrich fire-dependent communities and provide habitat for scores of plant and wildlife species that rival the more celebrated old-growth forests. Although it makes many uncomfortable, it is time that we recognize the important role that fire plays in renewing forests.”
Researchers compiled findings from western North America, central Europe, southeast Australia, and sub-Saharan Africa, summarized as:
DellaSala added, “In the 1940s when the Forest Service started its fire suppression policy, it made sense to put out fires for public safety. The truth is, large fires are not going away no matter what we do to try to stop them, so we need to do a better job of investing scarce public resources in protecting lives and homes.”
This major fire reference includes nearly 400 pages of science-based accounts of large and severe fires that have shaped the ecology of plant and wildlife communities for millions of years.
So called “mixed-severity fires” burn in a mosaic (quilt-like) pattern of small to large patches of low (ground burning) to high-severity (most trees killed) burns that resembles a living kaleidoscope of plants and wildlife. This is in stark contrast to logging after a fire.
Ebook review copies are available to credentialed journalists upon request. Contact Michelle McMahon by Email or +1.781.663.2268.
Also see this summary of the beneficial fire effects covered in the book.
Menu
LOS ALAMOS