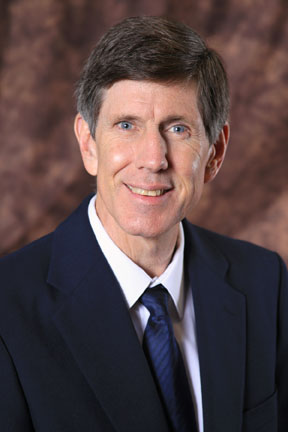 The driving force toward change is a county goal to become “a carbon-neutral electric provider by 2040.”

At present, the county and LANL have five sources of power: the Public Service Company of New Mexico (PNM) San Juan Generating Station; Laramie River Station in Wyoming; the county-built and owned El Vado and Abiquiu hydroelectric power plants on the Chama River; a Western Area Power Administration (WAPA) allocation; and the county’s East Jemez Road solar farm. This arrangement dates from a county-laboratory “Energy Coordination Agreement” signed in 1985 and renewed in 2015 for another 10 years.

The two partners share generation and transmission resources. The laboratory uses approximately 80 percent of the power, and the county uses 20. Costs are shared according to power use. The renewed agreement of 2015 provides that the county may “dispose of generation assets” provided the needs of both partners are still met. Both partners want to continue the sharing agreement well into the future.

The goal of carbon-neutrality was approved by the county’s Board of Public Utilities as a part of a list of strategic objectives in 2013. The goal came in response to environmental concerns and increasing federal environmental regulation of power-production plants. It is likely to affect the two coal-burning sources of local electricity—San Juan Generating Station, which produces 36 megawatts of the county-laboratory power, and Laramie River Station, which produces 10 megawatts of the local power.

The first big change could come in about six years.

At present, Los Alamos County owns 7.4 percent of Unit 4 at the San Juan Generating Station near Farmington. The San Juan Generating Station Plant Participation Agreement expires in 2022, and the related Coal Supply Agreement expires the same year. Glasco indicated that the county may choose to “bail out” of San Juan when the agreements expire. He said the county will have to provide notice by 2018 if it decides to do that. At present, there are nine participants in the two agreements, but that number is expected to be down to five or six after 2017, and Glasco said there is a “good chance that three more participants will leave the plant in 2022.” He noted that the county will “have a continuing obligation for mine reclamation and plant decommissioning and demolition until (it is) done,” and will “have a CERCLA (Comprehensive Environmental Response, Compensation, and Liability Act) liability forever.”

At present, Glasco said, Laramie River is “our cheapest power resource.” It provides 10 megawatts for Los Alamos. He said the current life expectancy of the station runs until 2040 or 2045. The county might choose to stop using Laramie River power after 2040—but it will have to consider the budgetary consequences.

In 2015, after a rate hearing at which members of the public mentioned concerns about coal, Los Alamos County formed a “Future Energy Resources Committee,” which, Glasco said, subsequently “examined our coal-fired resources, future carbon-free resources, and (the) place of renewable energy in Los Alamos County’s future.”

Glasco said the committee adopted the following definition of “carbon neutrality” as modified by the Board of Public Utilities. “The Department of Public Utilities will be a carbon-neutral electrical energy provider when the electricity distributed to Los Alamos County consumers is generated or purchased from sources that in their normal operation cause no net release of carbon dioxide into the atmosphere. (Note: does not apply to LANL).” The committee also approved several major recommendations.

The committee’s recommendations that the county “exit as economic conditions allow” from San Juan and Laramie River were adopted without change by the Board of Public Utilities. The board also adopted the committee’s “recommendation for keeping the hydroelectric plants as our baseload carbon-free resource, and adding other carbon-free resources to make up the balance of our usage.”

The two hydroelectric plants (at El Vado Lake and Abiquiu Lake) have a combined maximum capacity of 26 megawatts. Both plants are “run of the river,” and therefore, Glasco noted, “We usually get the majority of output during the spring.”

The county’s landfill solar plant produces about one megawatt.

Simple addition shows that the county-lab power demands are now met by about 73 megawatts of power drawn from five sources, two of which are coal-powered. Those two coal-powered sources (the San Juan Generating Station Plant and Laramie River Station) account for about 46 megawatts or about 63 percent of the local power.

So where will replacement power come from?

Glasco said that Los Alamos County “joined the Utah Association of Municipal Power Systems in 2015 in order to participate in their Carbon Free Power Project (CFPP) and potentially other power generation resource options. The CFPP is looking to build the world’s first commercial small modular nuclear reactor power station.” He added that it is scheduled “to have the first unit on line in early 2025.” The station will “consist of 12 separate, independently operated 50-megawatt units for a combined output of 600 megawatts. (The) site at Idaho National Laboratory (will) be operated by Energy Northwest, a public power agency in Washington state that operates a nuclear-powered electric generating station.” To go with this option, the county will have to sign a power purchase agreement by the end of 2016. The estimated cost would be about $30 million, paid over a 40-year bond life—but the price per megawatt hour might be as much as twice what Laramie River costs now. Nevertheless, by adding the proposed CFPP power, the county (and the lab) could go carbon-neutral and still meet 97% of current power demand.

The future of Los Alamos County’s electrical utility—like its past—could be highly innovative.