Give Children the Gift of Los Alamos History 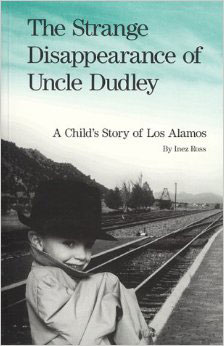 “The Strange Disappearance of Uncle Dudley” is the story of the wartime absence of loved ones, told from a family perspective in a read-it-to-me book for children. It features archival and modern photos of Los Alamos.

In the early nineties, the Los Alamos Writers Group (LAWG) had summoned Lore Watt, head of Los Alamos Historical Society Publishers, to talk about the publishing process and what kinds of books the Society would publish. At that time, Lore said, there were no stories for children about Los Alamos and its part in bringing World War II to an end.

Inez Ross, LAWG member, had an idea and presented a mock-up and outline to Watt, who approved it, and said she would submit it to the publishing committee for approval. But Watt was dying of cancer and the project was delayed. Colleen Ollinger, owner of Otowi Station Book Store and Otowi Crossing Press, offered to publish the book.

Arrangements were made with local friends, Marilyn and John Dienes and Dr. Peter Lindberg, to photograph them and the grandchildren of Dexter and Fran Sutherland. Graphic designer Shermagne Gunn manipulated Ross’s photos, so that the picture of Uncle Dudley, who was actually embracing his wife in a Los Alamos living room, was placed in front of the vintage train cars at Lamy, to show the scientist welcoming his wife to join him in the Secret City.

A favorite photo is one depicting a baby inside a post office box, a reminder that birth certificates issued during the Manhattan Project era state the place of birth as P.O. Box #1663, Santa Fe, N.M.  Another archival photo, published with permission of LIFE magazine, shows families perched on balconies and fire escapes of a New York tenement, waving in celebration of the end of the War.

The book has become a favorite for people who recall the original purpose of the Scientific Laboratory, and purchase it for children and grandchildren as a historic souvenir of Los Alamos.

Order the book from Ross by emailing her at inezaross@gmail.com, or save the postage fee by meeting her in downtown Los Alamos to have her sign and personalize the book for you or the gift recipient. Visit Ross online at http://www.inezross.com/.