Gift of a Triumph TR6 Keeps on Giving 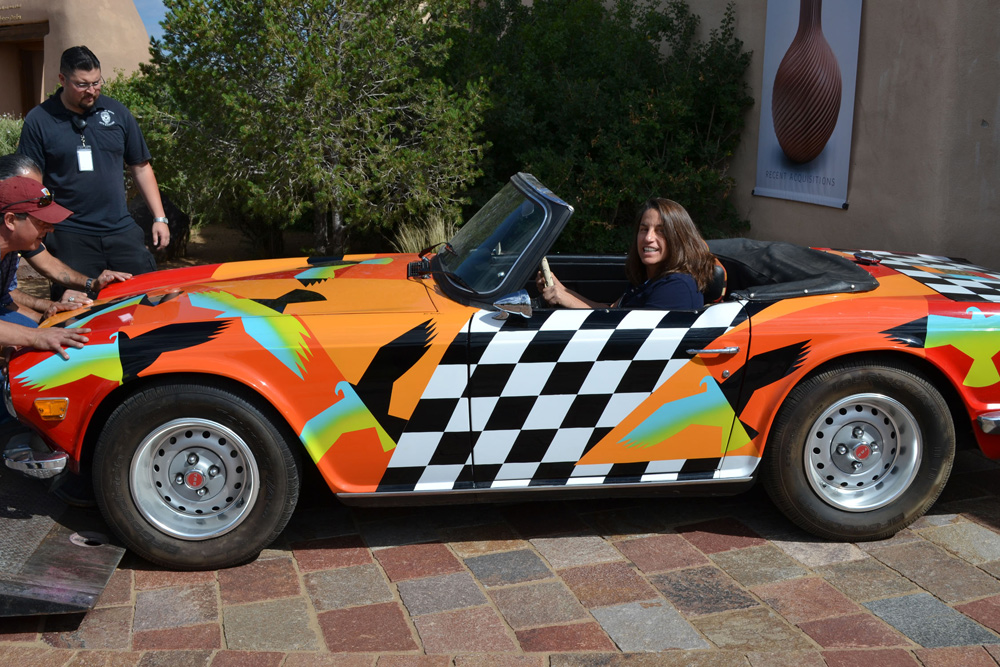 A 1974 Triumph TR6 decorated by Hopi Tewa artist Dan Namingha and nine other Native American artists is a gift to MIAC that just keeps giving. Photo by Dody Fugate

SANTA FE—A 1974 Triumph TR6 decorated by Hopi Tewa artist Dan Namingha and nine other Native American artists is parked in the lobby of the Museum of Indian Arts and Culture (MIAC), a symbol of a broadened approach by the museum to create partnerships with other area institutions that share a mission in honoring and perpetuating Native art and education.

Just as 10 artists collaborated to turn the car into an art piece, now MIAC is collaborating with the Institute of American Indian Arts (IAIA) to ensure Native American students are prepared to fill positions at museums that reflect their peoples’ art and culture.

The museum and the institute share a common goal – documenting and celebrating Native American art and culture. IAIA is the only four-year fine arts institution in the nation devoted to contemporary Native American and Alaska Native arts.

MIAC Director Della Warrior (Otoe-Missouria) created five internships, guided by her own background in education. While president of the IAIA from 1998 to 2006, Warrior successfully developed a multi-million dollar state-of-the-art campus and gained accreditation for the institute’s two-year and first four-year academic degree programs. She also served as director of Indian Education for Albuquerque Public Schools and as an expert consultant in the establishment of the National Native Arts and Cultural Foundation, an initiative of the Ford Foundation.

“As more tribes establish their own museums to document their heritage from their point of view, rather than that of an outsider, they need more museum professionals – conservationists, curators, educators, administrators,” Warrior said. “With numerous tribal museums already in existence, the demand for these professionals already exists.”

IAIA was happy to have a new outlet for students studying or working in their programs.

“This will provide an excellent opportunity for our students to gain hands-on experience in a museum work environment and should assist MIAC with additional help in completing projects,” IAIA President Robert Martin said.

Interns are gaining experience at MIAC by assisting the curatorial, registrar and conservation staffs.

The partnership with IAIA is new, but MIAC and other museums have long counted on partnerships with collectors to provide the collections that are exhibited in museum galleries.

The 1974 Triumph was donated this summer by Dr. Elizabeth Sackler, the founder and president of the American Indian Ritual Object Reparation Foundation and a key figure in arts education and philanthropy. Sackler is the founding president of the Friends of the Freer and Sackler Galleries of the Smithsonian Institution in Washington, D.C. Sackler also is responsible for the gift of The Dinner Party by Judy Chicago to the Brooklyn Museum, where it is permanently installed in the Elizabeth A. Sackler Center for Feminist Art.

Warrior and Dr. Sackler agreed the car was the perfect symbol of collaboration to mark the beginning of MIAC’s partnership with IAIA.

It also is a symbol of the important partnerships museums forge with collectors, Warrior said.

“Over the years, individuals like Dr. Sackler have turned their affinity for native art into invaluable collections that now comprise much of what museums’ exhibit,” Warrior said. “We are indebted to them and their particular interest in collecting the art of native people and hope these relations will continue.”

Sackler offered the winning bid of $90,000 for the Triumph at a SWAIA auction in 2002. IAIA and SWAIA shared the proceeds for scholarships and awards. The Triumph was donated by the late Sam and Ethel Ballen, owners of La Fonda and longtime supporters of MIAC, IAIA, and SWAIA.

“This is a good example of, not only a collaboration, but how the donation was doubled,” Warrior said. “It benefited the two organizations at the time, and now MIAC is the beneficiary of the gift and it will be in the collection to be shared with the public.”