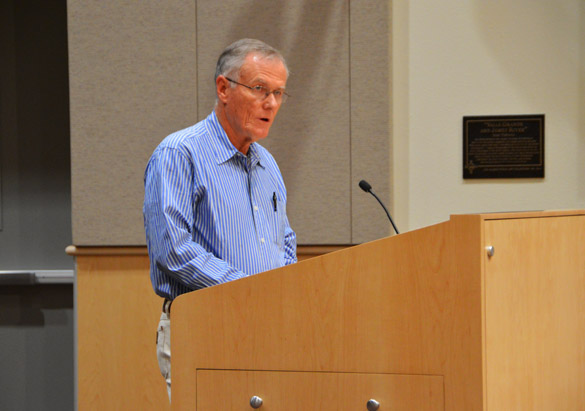 During Monday’s opening night of the FY-2016 Budget Hearings in Council Chambers, former County Councilor Robert Gibson addressed the County Council during public comment and urged them to carefully considered all of the elements in the proposed budget and not just rubber stamp it.

Gibson began his comments by acknowledging the budget staff’s “usual sound presentation”, but added that the format the County has used for more than two decades is getting “long in the tooth”.

“If we would like to be more transparent and citizen-friendly, budget presentation format would be a good place to start,” Gibson said. “What is easy to comprehend is the proposed 10 percent hike in property taxes. This is not a reinstatement or reestablishment, as it is called. It is a tax increase, pure and simple. There was nothing temporary about the tax reduction several years ago often referred to. That was a permanent reduction to mitigate a third of the large increase property owners were facing for school bonds.”

Gibson added that even if a tax increase was actually necessary, Council should consider whether it should be in GRT or property tax.

“It is often argued that we need more balance in our tax structure, so property taxes should be higher,” he said. “That might be true in a normal community. In ours, the vast majority of property is owned by the federal government and tax exempt. Hence an increase in property tax is paid entirely by local citizens. Only around 20-25 percent of a GRT increase would be paid by local citizens by requiring LANL to pay its share of any increase in the overall tax burden.”

Gibson told Council that no tax increase is really needed at all. “Citizens do not get to raise our own pay just because we want to spend more … our government should not, either.” he said.

Most politicians love to say “yes” … to try to make every individual interest happy … that’s the surest path to failure in the big picture, especially where budgets are concerned, Gibson said, adding that there are hard choices and hard efforts necessary “to live within our income. Please make them.”

Saying that time (3-minute limit) does not permit him to go into details on the expense side, Gibson addressed briefly two items.

One of those difficult choices is what to put into the staff salary pool, he said. The County has a good staff and wants them to be paid fairly. He explained that another new “salary administration structure” is proposed and there are always additional costs associated with changes in salary structure because there would be winners and losers. No one wants anyone’s pay reduced, he said, so there will be no losers. The net result is a larger overall increase than would otherwise occur. “Please be careful.”

Another place to be careful, Gibson said, is in the opposite direction – in trimming training, supplies, equipment and maintenance. These are often short-sighted false economies, he said, penny-wise and pound-foolish. He expressed concern about the condition of some of local roads and also wondered if an 8-10 year life for computers as listed in the proposed budget is truly realistic.

“Please do not rubber stamp the proposed budget,” Gibson urged the Council. “Like all, it deserves your critical consideration.”