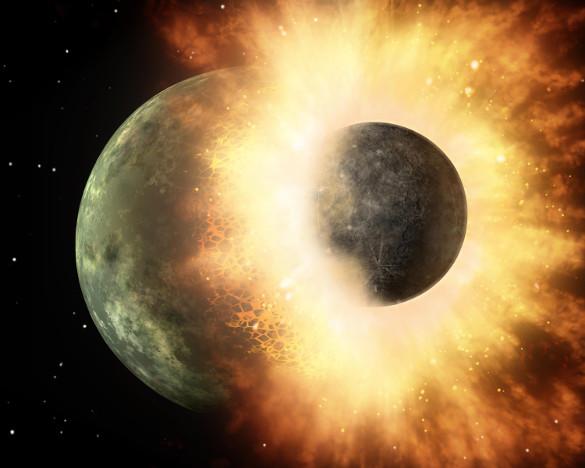 Artist’s depiction of a collision between two planetary bodies. New research suggests the stark difference between the Moon’s heavily-cratered farside and the lower-lying open basins of the nearside were caused by a wayward dwarf planet colliding with the Moon in the early history of the solar system. Courtesy/NASA/JPL-Caltech
AGU News:
WASHINGTON, D.C. — The stark difference between the Moon’s heavily-cratered farside and the lower-lying open basins of the Earth-facing nearside has puzzled scientists for decades.
Now, new evidence about the Moon’s crust suggests the differences were caused by a wayward dwarf planet colliding with the Moon in the early history of the solar system. A report on the new research has been published in AGU’s Journal of Geophysical Research: Planets.
The mystery of the Moon’s two faces began in the Apollo era when the first views of its farside revealed the surprising differences. Measurements made by the Gravity Recovery and Interior Laboratory (GRAIL) mission in 2012 filled in more details about the structure of the Moon — including how its crust is thicker and includes an extra layer of material on its farside.
There are a number of ideas that have been used to try and explain the Moon’s asymmetry. One is that there were once two moons orbiting Earth and they merged in the very early days of the Moon’s formation. Another idea is that a large body, perhaps a young dwarf planet, found itself in an orbit around the Sun that put it on a collision course with the Moon. This latter giant impact idea would have happened somewhat later than a merging-moons scenario and after the Moon had formed a solid crust, said Meng Hua Zhu of the Space Science Institute at Macau University of Science and Technology and lead author of the new study. Signs of such an impact should be visible in the structure of the lunar crust today.
“The detailed gravity data obtained by GRAIL has given new insight into the structure of the lunar crust underneath the surface,” Zhu said.
The new findings from GRAIL gave Zhu’s team of researchers a clearer target to aim for with the computer simulations they used to test different early-Moon impact scenarios. The study’s authors ran 360 computer simulations of giant impacts with the Moon to find out whether such an event millions of years ago could reproduce the crust of today’s Moon as detected by GRAIL.
They found the best fit for today’s asymmetrical Moon is a large body, about 480 miles (780 kilometers) in diameter, smacking into the nearside of the Moon at 14,000 miles per hour (22,500 kilometers per hour). That would be the equivalent of an object a bit smaller than the dwarf planet Ceres moving at a speed about one-quarter as fast as the meteor pebbles and sand grains that burn up as “shooting stars” in Earth’s atmosphere. Another good fit for the impact combinations the team modeled is a slightly smaller, 450-mile (720-kilometer) diameter, object hitting at a mildly faster 15,000 miles per hour (24,500 kilometers per hour).
Under both these scenarios, the model shows the impact would have thrown up vast amounts of material that would fall back on the Moon’s surface, burying the primordial crust on the farside in 3 to 6 miles (5 to 10 kilometers) of debris. That is the added layer of crust detected on the farside by GRAIL, according to Zhu.
The new study suggests the impactor was not likely an early second moon of Earth’s. Whatever the impactor was — an asteroid or a dwarf planet — it was probably on its own orbit around the Sun when it encountered the Moon, said Zhu.
The giant impact model also provides a good explanation for the unexplained differences in isotopes of potassium, phosphorus and rare-earth elements like tungsten-182 between the surfaces of the Earth and Moon, the researchers explain. These elements could have come from the giant impact, which would have added that material to the Moon after its formation, according to the study’s authors.
“Our model can thus explain this isotope anomaly in the context of the giant impact scenario of the Moon’s origin.” the researchers write.
The new study not only suggests an answer to ongoing questions about the Moon, but may also provide insight into the structure of other asymmetrical worlds in our solar system like Mars wrote the researchers.
“This is a paper that will be very provocative,” said Steve Hauck, a professor of planetary geodynamics at Case Western Reserve University and Editor-in-Chief of the JGR: Planets. “Understanding the origin of the differences between the nearside and the farside of the Moon is a fundamental issue in lunar science. Indeed, several planets have hemispherical dichotomies, yet for the Moon we have a lot of data to be able to test models and hypotheses with, so the implications of the work could likely be broader than just the Moon.” 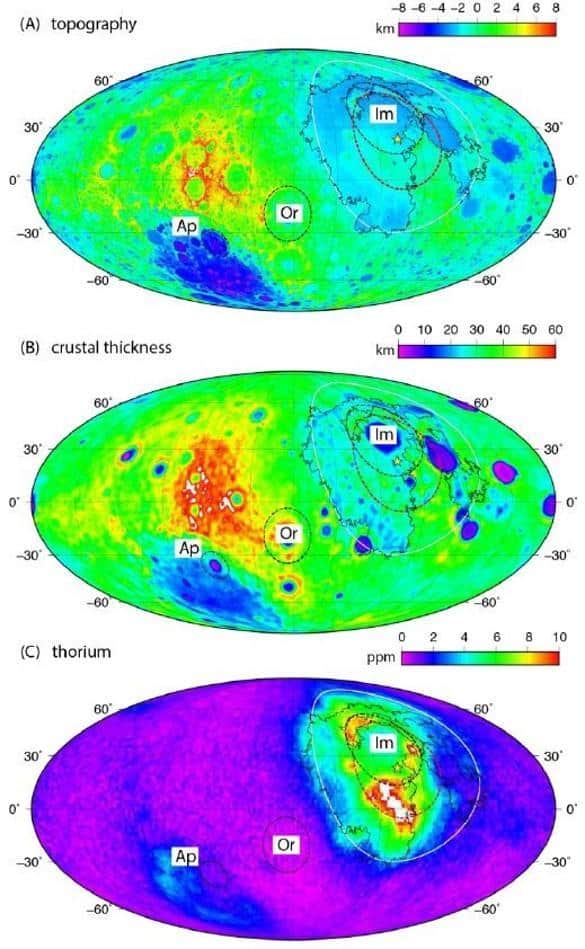 The topographic (A), crustal thickness (B), and thorium distribution of the Moon show a dramatic difference between the nearside and farside. The star on the nearside represents the center of the proposed impact basin. The black dashed lines represent the boundary of Imbrium (Im), Orientale (Or), and Apollo (Ap) basin, respectively. Courtesy/JGR: Planets/Zhu et al. 2019/AGU 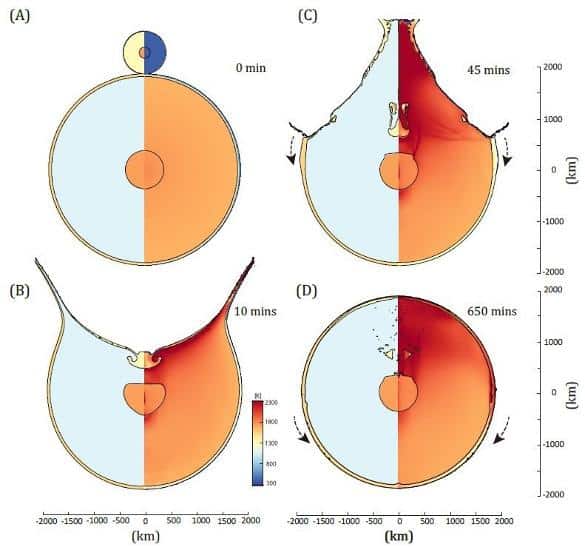 The basin-forming process for an impactor 780 kilometers in diameter (with a 200-kilometer diameter of iron core) with an impact velocity of 14,000 miles per hour (22,500 kph). In each panel, the left halves represent the materials used in the model: gabbroic anorthosite (pale green), dunite (blue), and iron (orange) represent the lunar crust, mantle, and core, respectively. The gabbroic anorthosite (pale yellow) also represents the impactor material. The right halves represent the temperature variation during the impact process. The arrows in (C) and (D) represent the local materials that were moved and formed the new crust together with deposits of material that was blasted from the impact. Courtesy/JGR: Planets/Zhu et al. 2019/AGU
Menu
Los Alamos
77°
Fair
5:49am8:25pm MDT
Feels like: 77°F
Wind: 14mph S
Humidity: 30%
Pressure: 30.25"Hg
UV index: 10
TueWedThu
90/66°F
90/64°F
81/63°F
Weather forecast Los Alamos, New Mexico ▸