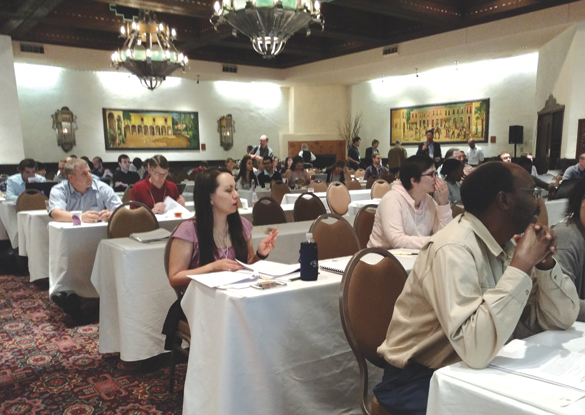 The 11th Annual Sequencing, Finishing, Analysis in the Future Meeting June 1-3 had more than 300 people in attendance, a capacity audience in the ballroom at the La Fonda on the Plaza in Santa Fe. Photo by Roger Snodgrass/ladailypost.com

An annual conference of researchers, technologists and funders in the soaring field of genomics held its 11th event June 1-3 in Santa Fe. The conference has grown from about 70 people when it began in 2006 to more than 300 this year. 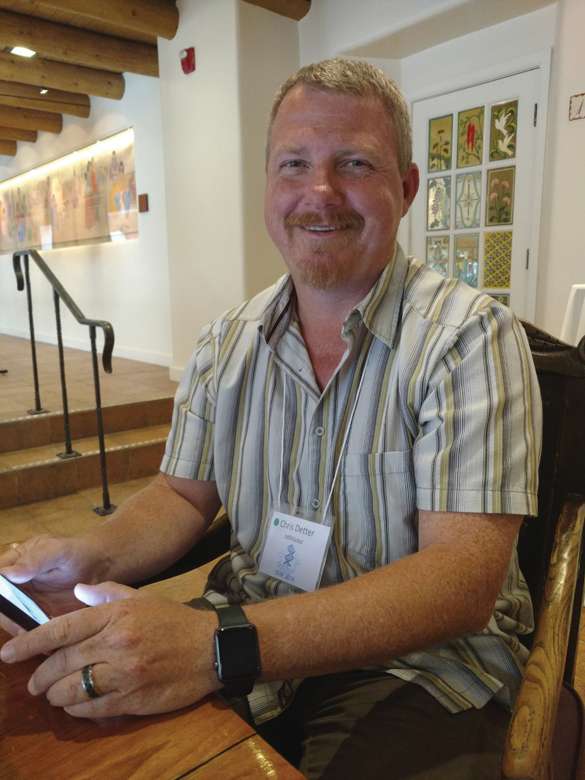 Chris Detter, founder and chairman of the organizing committee of the 11th Annual Sequencing, Finishing, Analysis in the Future Meeting. Photo by Roger Snodgrass/ladailypost.com

This series of meetings grew out of a time just after the race to sequence the human genome was nominally finished in 2003, foreshadowing mountains of work yet to be done. Los Alamos National Laboratory, by virtue of its historic concerns about radiation effects on human cells, had a head start in collecting genetic information and would become a major producer and repository of genetic information, like the National Laboratory Gene Library Project and the GenBank database of genetic sequences which is now part of the National Institutes of Health.

A conference founder and LANL genomics researcher, Chris Detter  said the idea for the convocation came up one day while he was walking across the Omega Bridge in Los Alamos and posed a question to a colleague: “How about we start bringing all the centers around the world together at one location and we have a meeting?” he wondered.

Back in 2006, a first draft of the human genome had been sequenced using a technique known as the whole genome shotgun, an expedited, computerized way to reconstruct a genome from many smaller pieces of the genomic information in each cell. How then to finish the job and fill in the remaining gaps? “And we called the meeting, ‘Finishing in the Future,’” Detter said, “because that part of closing the genome is called ‘genome finishing.’”

Ironically, the first keynote address at the first meeting was titled, “Why finish anyway? What more do we get from a finished sequence?” a talk by Julian Parkhill of the Welcome Trust Sanger Institute Genome Campus in Cambridge, U.K.

In his abstract for the presentation, Parkhill asked, “Given that unfinished shotgun data provides us with 99 percent of the sequence of an organism, what more do we get from the hard work of finishing?”

He offered, to answer the question using examples from bacterial research projects and to pinpoint some of the interesting data that was already showing biological relevance in variations and mutations.

Cracking and cradling the code of life, a logo for the 11th annual genomics and bioinformatics conference. Courtesy image

The name of the conference has changed over time, said Detter, who is chair of the meeting’s organizing committee, “because we’re now focusing on genetics as a whole and how to apply the current next generation sequencing technologies to analyze and utilize the genomes we’re sequencing.

But the question remains: “Once you sequence the genome what do you do with it, how you make use of all the data that are coming off genome sequencers that are out there?”

About half-way through the three-day conference, one of the keynote speakers began his presentation on a similar note.

“How many of you have ever wondered what a dog is thinking when it is chasing a car?” asked Nathan Lakey, president and CEO of Orion Genomics, over a slide of a bounding dog chasing an unreachable object. “We’ve been kind of chasing cars as well in the genome community in the last 20 years at meetings like this.”

Boosted by the insights and advancing techniques in genome sequencing results, he said, “We’re in a position now where we can do some pretty cool things with a complete genome sequence.”

Lakey’s company Orion Genomics has been working with the Malaysian Palm Oil Board and that work, he reported, is beginning to have an impact on Southeast Asian countries and their economies. Using genomic information and analysis, he said, “We’re able now to pick winners from losers among trees that are about to be planted in the field – with a DNA test.”

The issue is important for both economic and environmental reasons. The world population is pushing toward 10 billion people by 2056 and people are moving into cities where their incomes

Are going up, and they eat more meat and other foods cooked with edible oil. The demand for palm oil is increasing by 4.5 percent per year, doubling every 17 years. Although the land available for agricultural use has been increasing every year since man emerged, Lakey said, we hit a peak around 2009, and because of erosion, urban reclamation and salinization of soils, the amount of land available is in decline.

Although the expansion of palm oil plantations has been labeled “an ecological nightmare,” by environmentalists, Lakey said, many former critics now see the potential for highly efficient and sustainable palm oil trees to take pressure off the dwindling rainforest.

What to do after finishing?

What to do after finishing? Much of the conference had to do with highly technical questions among the experts, like standardizing terms and metrics and solving technical problems. But there were also many examples of the work under way across a broad front.

Three days of meetings and more than a hundred presentations covered a range of timely topics and issues in the discipline, from multidrug resistant pathogens to the new Zika virus pandemic, and powerful new techniques like CRISPR, a novel biochemical process for precisely editing genetic sequences, which has inspired both upside promises and worrisome downside risks.

One infectious disease, still threatening despite having receded to the background, is tuberculosis. Of growing concern is an increasing number of reports about “multi‐, extensively‐ and even totally‐drug resistant (MDR, XDR and TDR) cases of TB,” as was discussed in the opening keynote address by Michael Gilmore of the Harvard School of Medicine. Antibiotic resistance was a major theme.

A team made up largely of Los Alamos National Laboratory researchers reported on Middle East respiratory syndrome corona virus (MERS-CoV), a virus related to Sudden Acute Respiratory Syndrome that was identified in southern China in 2003. SARS spread to 37 countries with a fatality rate of nearly 10 percent. By comparison, the fatality rate of MERS-CoV, based on 1045 confirmed cases identified by July 2015, was said to be 44 percent.

A forensic pathologist, Yingying Tang from the Office of the New York City’s Chief Medical Examiner gave a talk on how genomics is now being used to identify SUD, sudden unexplained deaths, a catch-all category for a certain percentage of people who die of natural death but of undetermined causes.

These are mysterious deaths that couldn’t be solved by conventional procedures – investigating the scene of the death, standard autopsy and examination of medical records. But Tang said her study which made use of family history, advanced sequencing techniques and genetic databases to uncover clues from family risk factors otherwise obscure variants to demonstrate the effectiveness and feasibility of molecular autopsy in the medical examiner setting.

A paper in PLOS Biology last year by Zachary D. Stevens, et al. looked into the question of how much data genomics is creating, compared to astronomy, YouTube and Twitter. The study concluded that genomics is “either on par with or the most demanding of the domains analyzed here in terms of data acquisition, storage, distribution, and analysis.”

With its data doubling every seven months, the genome appears to have a lot left to show us.