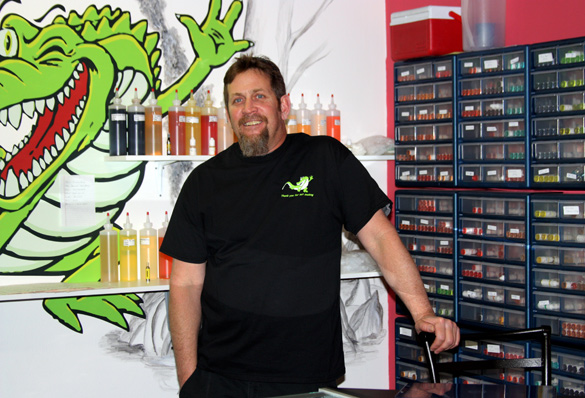 Gator’s L.A. Vapor brought electric cigarettes to Los Alamos last year and is celebrating its first anniversary May 24 by adding Saturdays to its Monday through Friday operating schedule beginning in June.

“It’s going really well. We’ve had a lot of support from the community and we really want to say thank you,” owner Darin Diffey said. “New customers are still coming in. I have about 200 regular customers who come in weekly. All of them have quit smoking regular cigarettes. That’s what makes me feel good. These people are living healthier lives. People tell us all the time that they are feeling so much better.”

Electric cigarettes deliver nicotine through a smoke-like vapor that can be inhaled and provides a vehicle for nicotine delivery into the bloodstream via the lungs. An electronic cigarette contains three essential components: a plastic cartridge that serves as a mouthpiece and a reservoir for liquid, an “atomizer” that vaporizes the liquid, and a battery.

Liquid for producing vapor in electronic cigarettes, known as e-juice or e-liquid, is a solution of propylene glycol (PG) and/or vegetable glycerin (VG) and/or polyethylene glycol 400 (PEG400) mixed with concentrated flavors, and optionally, a variable percentage of a liquid nicotine concentrate.

Many people use electronic cigarette to quit smoking by gradually reducing the amount of nicotine in the e-juice. Even if e-cigarette users are still getting nicotine, they don’t get the tar and smoke in their lungs that regular smokers get, Diffey said. Another advantage is that e-cigarette users do not generate second-hand smoke, he said.

Diffey stressed that the store does not sell to those 18 and under.

Gator’s provides customers with many different choices of e-cigarettes, including five starter kits.

“Our products come from top manufacturers,” Diffey said. “Our return rate is only about 1 percent, because of the high quality of our goods. I get a lot of compliments because I’m very knowledgeable about my products.”

Gator’s L.A. Vapor carries approximately 75 flavors of e-juice, all made in the U.S. It comes in 11, 16 and 24 milligrams of nicotine so smokers can reduce the amount of nicotine as they quit, Diffey said. E-juice costs around $6 a bottle, a big savings over regular cigarettes, since it lasts more than a week.

Gator’s is now mixing its own custom flavors with names like Papa Smurf, Skittles and Fire and Ice. For those who prefer their e-cigarette to provide a tobacco taste, flavors that mimic tobacco also are available.

The jury seems to be still out on whether e-cigarettes are harmful to one’s health, however there seems to be little doubt they are less harmful than regular cigarettes. The American Association of Public Health Physicians (AAPHP) supports electronic cigarette sales to adults because the possibility exists to save the lives of 4 million of the 8 million current adult American smokers who will otherwise die of a tobacco-related illness over the next 20 years.

Gator’s L.A. Vapor is at 1907 Central Ave., upstairs from El Parasol and Aspen Copies. Access Gator’s L.A. Vapor through a stairway next to the right of Aspen Copies.  The store is open 10 a.m. to 6 p.m. Monday through Friday and Saturdays beginning in June. The store accepts credit cards or cash. For more information, call Gator’s at 505.661.9750.