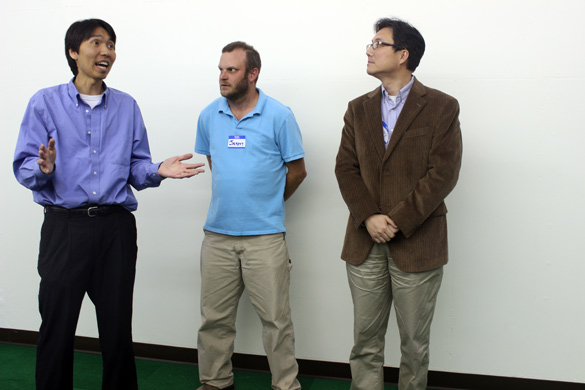 When Gary Xie came to the United States from China 20 years ago, he had two suitcases and $500 in cash.

Four years later, after he graduated from the University of Florida, he landed his first job at Los Alamos National Laboratory (LANL). It was the kind of high paying and stable job that every fresh graduate dreams about. Sound familiar? A typical American dream, right?

Now, he has another America dream, a dream to conquer the unknown territory of the business world. For past two years, Xie has been enrolled in Nik Seet’s entrepreneurship classes, and building his own business, Daisy Chain USB from the ground up.

“At first I just wanted to gain transferable business skills, like giving better oral presentations, writing proposals in the science field, being able to pitch business ideas, but Seet’s courses have inspired me and opened my eyes to the business world,” Xie said. “Nik Seet’s entrepreneurship courses have had a life-changing impact on me.”

While doing the course work for Seet’s class, Financing the Entrepreneurial Enterprise, Xie came up an idea of making a self-replicated USB port that connects several devices on a single USB outlet. He came up with the idea while travelling with his family on spring break. Everyone had at least one device that needed to be connected or charged and there weren’t enough outlets in the hotel room.

He realized this patentable idea had commercial potential when he and his classmate, Jason Cox, won first place at the UNM-LA Pitch Day. He quickly filed the Outside Activity Permission Request with LANL and filed patent application with USPTO. Since then, he has won multiple awards at regional business plan competitions, including finalist in Santa Fe BizMix 2014, grand prize at Santa Fe Startup Weekend 2014, and more recently, the second place in Power Up Your Idea Competition 2014.

With his Utility and Design Patent Pending in hand, he just launched his crowdfunding campaign on MainStreet Crowd (https://www.mainstreetcrowd.com/projects/daisychain/). This campaign is to raise money to get to the next step of building his business.

“The most exciting thing about entrepreneurship for me is taking the risk and entering into the online or local market with strong innovative ideas that help the local economy. Becoming rich is not my primary goal,” Xie said. “I want to build a strong team for my business and I want to show my kids, neighbors and friends that if you have an innovative idea and then devote your time and energy to that idea and never give up; you can accomplish your goal and fulfill your American dream.”

“I am grateful for all the support I’ve received from the community and help from LAVA, VAF, Santa Fe BizMix and SFBI,” Xie said.