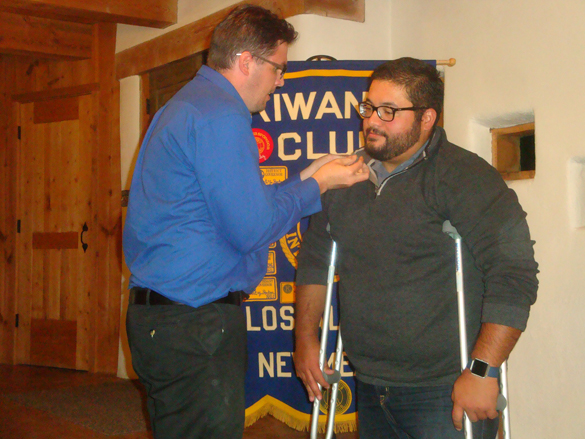 Jordan Garcia, right, receives his pin as 2017-2018 President of the Los Alamos Kiwanis Club from Kiwanis Southwest District Division 3 Lt. Gov. James Phelps of Santa Fe. Garcia had a badly sprained ankle and had to use crutches during the ceremony, but he is recovering rapidly. Courtesy photo
KIWANIS News:
The new (2017-2018) Kiwanis President, Jordan Garcia, was born in Deming and earned an undergraduate degree in finance and a master’s degree in business administration from New Mexico State University (NMSU) in Las Cruces.
His educational background is similar to that of John Arrowsmith, this year’s “Kiwanian of the Year,” and, in fact, they knew each other at NMSU. Garcia and his wife, Heather, met in high school and were students together at NMSU. They have one child, their son Aden, 10, who is now a student at Aspen Elementary School.
Garcia came to Los Alamos in July 2007 to work in finance at Los Alamos National Laboratory. Subsequently, he went to work for the Los Alamos County Utilities Department. He has been there for almost six years.
He joined Kiwanis Dec. 11, 2010, while he was still working at the lab. He served on the Kiwanis Board of Directors, was chairman of the trustees, helped with the Fourth of July festivities, and posed as Santa Claus several times before becoming Second Vice President, First Vice President, and, now, President of the club.
Asked why he first joined Kiwanis, he said, “I’ve always been community-oriented, and I really wanted to get involved.” He said he likes the fact that the money Kiwanis raises from the public all goes back out as service.
He hopes to “increase (Kiwanis) visibility and membership” during his time as president, and he hopes to play a role in giving Kiwanis many more years to add to its legacy.
Garcia’s Team:

Members of his Board of Directors:

There is one vacancy on the Board.
Menu
LOS ALAMOS