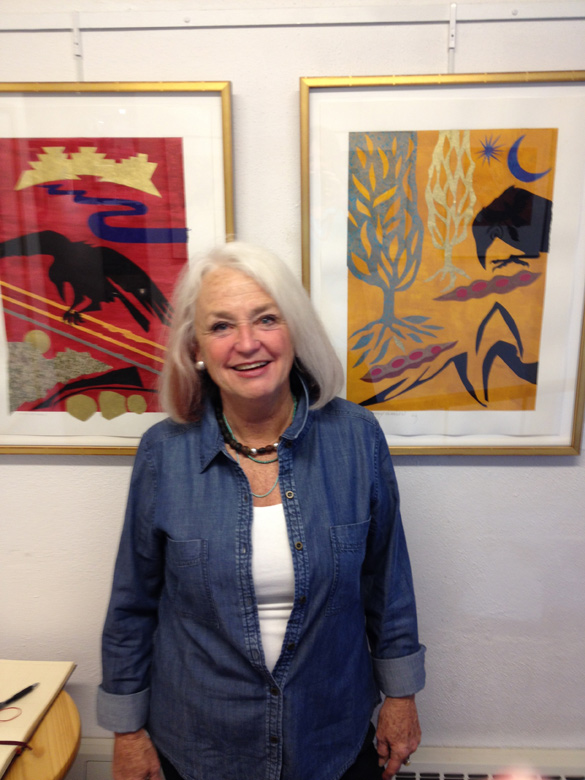 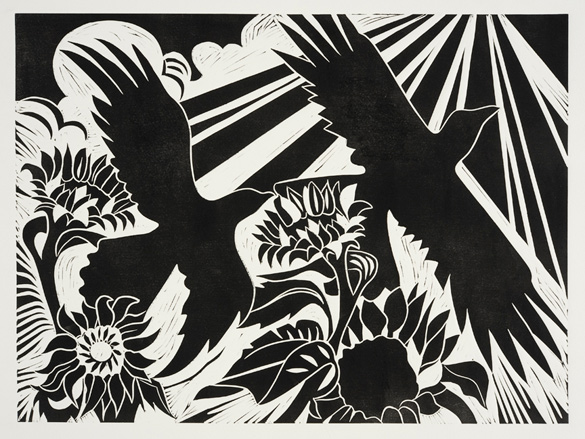 Like so many of us, Lily Schlien is enamored of ravens and they frequent her art work. Her exhibit in the Portal Gallery at the Fuller Lodge Art Center “Corvus Corax y Su Mundo…The Black One and His World,” recently transformed from Phase I into Phase II.

Phase I collected her most recent works with an emphasis on collage and monoprints; Phase II takes us back to her beginnings as a print maker with linocuts and woodcuts from her private collection.

Schlien will hold an informal gallery talk at 5 p.m. Friday at the Art Center. She will bring a number of the materials used to produce her works, including wood blocks, linoprint blocks, carving tools and ink and transfer tools. She hopes to meet both art admirers and artists to talk about both her process and her evolution as an artist.

Schlien prints images from either woodcuts or linocuts, some combined with handmade paper collage or painted backgrounds.

“I come to printmaking after decades of making contemporary quilts and pillows of my own design as a manufacturing and retail business,” Schlien said. “Working with wood or linoleum sheets gives me both the physical pleasure of carving and the chance to ‘feel’ the lines that define the structure of an object. The carving and imagery of the blocks are planned but the accidental is welcomed as the image is being ‘born,’ when tools and materials speak for themselves … the magic of it all is so very satisfying.”

Schlien has an interesting history as an artist. She only got interested in print-making around 10 years ago when she was invited by a friend to take a class at Santa Fe Community College. Before that, Schlien had worked in the fabric realm. She started out stitching wall hangings; her themes were based on nature and often quite abstract.

While living in Mexico City in the 70s, she created a boutique with a friend where they sold wearable art including clothing and wall hangings, then eventually she began quilting as well. After a visit to Santa Fe, Schlien was inspired to move there. She quilted, selling out of her studio and at arts and crafts fairs. By 1981 this passion for quilting evolved into a business. At its peak her business had 18 employees sewing and selling her designs in two separate retail stores.

Schlien celebrated the century change in 1999 by selling everything off, moving to Europe, buying a boat and traveling all the way around Western Europe to Spain. After her return to Santa Fe, she took the printmaking class and fell in love with that process. She welcomes visitors to her studio “The Bird’s Nest” on Old Santa Fe Trail. Visit her website at lilyschlien.com.

A virtual tour of Center “Corvus Corax y Su Mundo…The Black One and His World, Phase I” can be viewed online at fullerlodgeartcenter.com/LilySchlien.