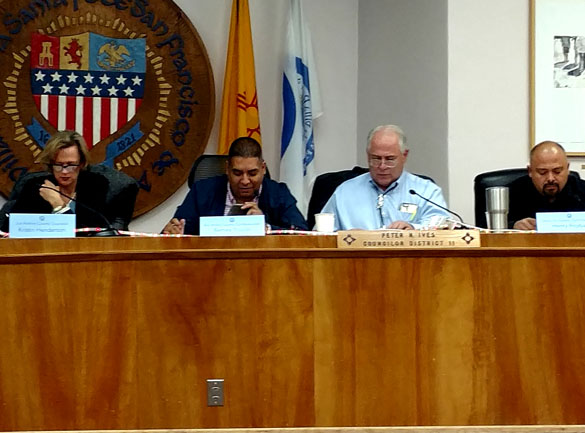 The Regional Coalition of LANL Communities learned Friday that the Senate approved the 2017 National Defense Authorization Act, which included an extra $10 million in cleanup funding from $185 million to $189 million as recommended by the New Mexico delegation, along with removing a redundant, double-taxing measure on Los Alamos National Laboratory research and development funds.

The bad news, said Katie Richards, Sen. Martin Heinrich’s state science and development director, was that the authorization did not come with a new spending bill, which means there will more likely be another Continuing Resolution based on the fiscal year 2015 budget, the last time a budget was approved.

RCLC Executive Director Andrea Romero updated efforts to craft a state tax provision that would make up for a potential loss of tax state and county tax revenues in the LANL region if the contract should go back to the former non-profit structure. Most non-profits do not have to pay gross receipts taxes. Romero said two avenues are under consideration by the Legislative Finance Committee staff. One would continue gross receipts tax collection through a specific New Mexico Statute. The other possibility would be a joint tax bill covering “Lab-like” entities and large hospitals currently not taxed. Direct negotiations with the National Nuclear Security Administration (NNSA) on the GRT issue also are a possibility.

On the next management and operating contract at LANL, Romero said the coalition was invited by NNSA Acquisition Manager Bob Raines to “build a platform” for what the local communities would like to see as a policy directive for the competition.

Asked by a board member what impact that might have, Romero said, “Our impact is unknown in the current situation,” considering the political transition that is underway. Romero added that the existing contract also could be extended for another year.

A new voice on this subject of the management situation was provided by Emil Mottola a prominent theoretical physicist at LANL. Mottola said he was attending the meeting because he was very concerned about the direction of the Laboratory as a profit-making organization.

“Privatization of the Lab has had a very negative impact on the scientific mentality of the Lab,” he said. “It’s a very different place than the place I came to 30 years ago.”

Mottola said he had decided to join the University Professional and Technical Employees recently, and he wants to gather information to document the history and lessons learned from LANL’s experience during the years since 2006, when the contract was first rebid.

“Science has definitely taken a hit at the Lab, due to the way the contract has been structured,” he said. “This has national security implications and of course long term implications for the region.”

Linda Matteson of Los Alamos County gave the county’s perspective on the process and current developments of the Manhattan Project National Historical Park, which was established by Congress in 2015. An unusual configuration for a national park, the Manhattan Project covers three different states and two federal agencies. Matteson noted another unique feature, which is that the National Park Service does not own any of the land, most of which is Department of Energy property, but also includes land owned by local governments, private owners and non-profit organizations. She said the park service is still working on the park’s narrative, and that the new Android app, “Atomic City,” was providing virtual access and introductory tours for visitors.

Marie Gomez, who grew up in the Pojoaque Valley, commented on the park plans during the public comment period. She teaches at the University of New Mexico and has just signed a contract with the University of Arizona for a book on the impact of the Manhattan Project in New Mexico from the point of view of Hispanic homesteaders who were uprooted by the military and Native Americans, based on years of research and her own collection of oral histories. She called for the national park narrative not to let the atomic story be told exclusively by the scientists and politicians. She also cautioned against neglecting the statewide consequences including that of the downwinders around Tularosa in Southern New Mexico and the uranium miners and their communities in the northwestern quadrant of the state.

“I urge the coalition to be really proactive in making sure these stories are heard but that they are accurate when told,” she said.

The RCLC, which is funded by the Department of Energy and participating municipalities, represents nine local regional governments on issues related to the Lab, including economic development, employment and community affairs. The coalition facilitates and coordinates input on matters related to Lab funding and environmental cleanup. Friday’s meeting was in the City of Santa Fe Council Chambers.

On the coalition’s radar: